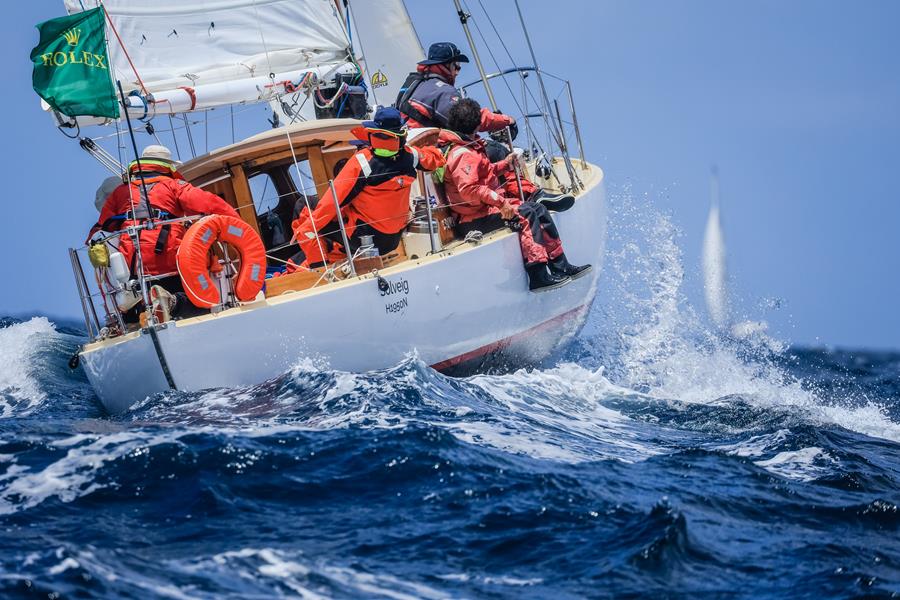 Solveig at the start of the 2021 Rolex Sydney Hobart. Pic - Salty Dingo

Solveig, the famous 71-year-old Halvorsen 36, designed, built and raced by the equally famous seafaring Halvorsen brothers in the early years, crossed the finish line of the Rolex Sydney Hobart Yacht Race at 08:42.11am this morning to bring the Cruising Yacht Club of Australia’s 2021 race to an end.

These days owned by Annie Lawrence and skippered by her husband John Whitfeld, and still carrying her original CYC54 sail number, Solveig was the last boat to reach Hobart.

“It’s so good to be here,” Whitfeld said on docking. “Especially after last year’s hiatus. We missed the place – it’s good seeing the mountains.

“The first couple of days and nights we had to batten down the hatches, but she looked after us. We found a couple of dead spots on the course after that and parked a couple of times.

“The old girls hard to get moving again when it’s like that. But the sun came out and the old girl looked after us,” the NSW yachtsman said.

On arriving so late in Hobart, Whitfeld, a veteran of 27 Hobarts admitted, “This is the first time I’ve finished on the 1st (of January), so we cracked open the champagne on Storm Bay.”

Solveig was not alone in finishing on New Year’s Day. Two other yachts joined her. Kevin Whelan’s Beneteau 45F5, Reve, crossed the finish line at 12:21.53am, in time to join the New Year revelry. Local Hero, the two-handed BH36, raced by Mark Ayto/Anto Sweetapple, finished the race at 04:04.11am.

The 2021 Rolex Sydney Hobart was a drawn-out affair, with a tough first day and night at sea that resulted in 38 retirements, the last one being Gun Runner, the Army Sailing Club’s Jarkan 925, the smallest boat in the fleet at 9.2 metres. She retired yesterday and was to replenish the water supply and sail on to Hobart.

The inaugural Two-Handed Division proved very successful, with 10 out of 18 entries completing the course. Those we spoke to are convinced there will be double the entries in 2022.