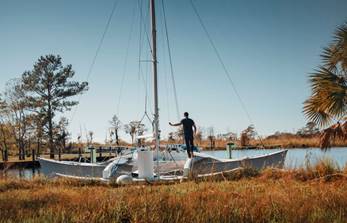 Montreal, QB, December 9, 2020 –On January 1st, 2021, 42-year-old Ryan Finn will depart New York City to set sail for San Francisco as he attempts to establish the first world record for a non-stop singlehanded sail. Ryan’s journey will include a 60-day journey, covering 14,000 nautical miles heading south through Bermuda, onto Brazil, and around Cape Horn in Chile; some of the most treacherous sailing terrain in the world, before passing the Galapagos Islands on his way up to San Francisco. Montreal-based Sailor Productions will capture footage of Ryan’s journey to produce a 60-minute documentary film, 2Oceans1Rock.

Ryan will be sailing a Russel Brown designed and built 36-foot Proa Jzerro. The design of the boat is modelled on the ancient technology used by Pacific Islanders and it is known for its efficiency, speed and reliability. He is well aware of the dangers that await him as he navigates remote parts of the globe, battles physical exhaustion and mental fatigue, as well as extreme weather conditions including those expected around the legendary hazards of a Cape Horn transit. Throughout the duration of his expedition, Ryan will be in constant contact with his crew stationed in New Orleans.

“I came up with the idea of a non-stop solo passage from New York to San Francisco on a small Proa to prove the concept of such a boat for a long, solo record breaking. The bigger project being a solo non-stop circumnavigation from East to West,” said Ryan Finn. “I don't think there's an existing multihull that could survive the non-stop westbound record, but I think a Proa could. While researching the route for this trip, I became obsessed and really haven’t thought about anything else since.”

A devoted sailor, Ryan has sailed more than 100,000 nautical miles, including three Trans-Atlantic and five Trans-Pacific crossings. He completed several other expeditions using 21 to 60-foot ocean racing vessels as well as other cruising and racing boats. In 2016, he sailed from Los Angeles to the Panama Canal, completing what is considered the longest solo sailing expedition in only 18 days on a Pacific Proa.

Sailor Productions will document this adventure from the beginning. Their crew has been onsite to film Ryan in his hometown of New Orleans as he prepares for his journey. He is currently making his way from New Orleans to New York City, where he will depart for San Francisco in early January. Throughout his expedition, the Jzerro will be rigged with multiple Insta360 cameras making it possible to capture Ryan’s journey as he faces the most enduring challenges.

“We’re thrilled to be capturing Ryan’s expedition as he attempts to set a world record in solo sailing. This is a unique project for sailors and non-sailors alike. It’s a true American adventure with the ability to inspire imaginations of all ages,” said Mathieu Dumont, Executive Producer, 2Oceans1Rock.