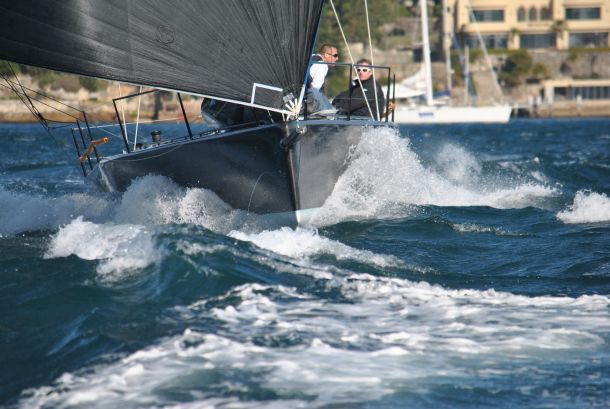 Menace romping to a win in Race 6 - Ellen Pragnell-Raasch pic.

The class association expects a record nine entries for the first event of the new series, and a smattering of serious sailing know-how as owners strengthen their chance of a one design victory, something that is getting harder and harder as the level of experience rises and the talent pool deepens.

The Kiwi outfit on Howard Spencer’s Menace joined the Australian MC38 fleet for one Pittwater and one Sydney Harbour weekend regatta in 2014 then returned home to Royal Akarana Yacht Club where they spent the summer taking on the local 40 and 50 footers on Auckland’s Waitemata Harbour, even out-running a TP52 says boat captain Chris Reid proudly. Now Menace is back for the start of the new pointscore series beginning with the MC38 Summer Pittwater Regatta at the RPAYC this weekend, February 14-15, 2015.

Two of the sailing world’s best from across the ‘dutch’ (as the Kiwis pronounce it), Ray Davies and his ETNZ trimmer James Dagg – return to Sydney this weekend with the Menace crew. Davies was instrumental in Spencer scoring his first class victory in the Autumn Cup on Pittwater last May and second podium place at the harbour event.

Reid is in Sydney preparing Menace for the two-day hit out against a likely record fleet and says the crew is “chomping at the bit to get amongst it,” adding “it will be very interesting to see how the new boats are getting on.”

From the end of last season to now Reid says, “our crew work has kept improving and we’ve had a bit of time to really study our sails and develop these further with Doyles. That’s going pretty well.” On the crew list he says there are a couple of changes but not enough to unsettle the core team. And yes he grants, “Ray Davies knows his way around the track.”

Up against Davies on Menace is Adam Beashel, another long-term member of ETNZ who grew up sailing on Pittwater and hooked up with plenty of childhood buddies on Marcus Blackmore’s MC38 Hooligan (RPAYC) at the end of last season. It will be Beashel versus Davies when the two tacticians hit the start line on opposing boats.

No doubt the international superstars add high gloss to the season opener, but it’s class President John Bacon and his mostly amateur crew on Dark Star (RPAYC) who have given the high profile names a licking more recently. Cameron Miles is a talented and experienced tactician and sailing with one of the original MC38 owners means the whole crew have years on the fresh batch of owners.

Defending MC38 national champion Ginger (CYCA) is another example of how time on the boat over multiple seasons can result in in slick crew work and an ultimately richer overall performance. The 80-something owner Leslie Green and his Ginger team scored the class’ major crown at Audi Hamilton Island Race Week last August.

Property developer Lang Walker, recently honoured with an Order of Australia for his philanthropic work, is running the double MC38 and Farr 40 program with a similar crew. Walker’s not able to drive Kokomo at the first regatta so has asked Anthony Bell, skipper of the 100ft supermaxi Perpetual Loyal, to step in. Bell had his first drive on the weekend, rejoining some of his 2011 Rolex Sydney Hobart line honours winning crew of John Flannery and North Sails’ Mark Bradford, who is calling tactics on Kokomo this weekend.

A national title at RPAYC April 10-12 and the class contesting its own division for the third time at Hamilton Island Race Week in August both complement and complete the season, but don’t count towards the final end of season pointscore.

*Part of the 2015 championship series

Class technical advisor Richard Slater will oversee instant on-water umpiring at each of the regattas.

All documents and online entry for the MC38 Summer Pittwater Regatta available here.