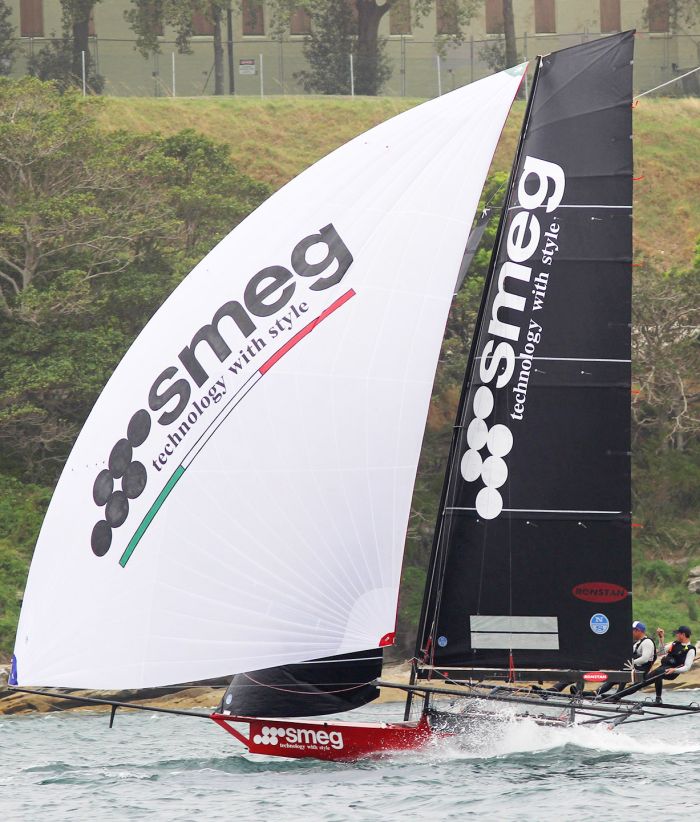 03/02/2020
The Smeg team of Micah Lane, Ricky Bridge and Peter Harris recorded a double victory on Sydney Harbour today when they scored two come-from-behind wins in Races 3 and 4 of the Australian 18ft Skiff Championship.
Trailing Tech2 in Race 3, Smeg showed exceptional downwind speed on the first lap of the course to grab the lead, then extended her lead throughout the rest of the course before going on to a 52s win over the defending champion Shaw & Partners Financial Services team of James Dorron, Harry Bethwaite and Tim Westwood.
Aron Everett, Courtney Mahar and Charlie Gundy continued their consistent form over the entire season when they finished third in The Oak Double Bay-4 Pines, a further 17s behind Shaw & Partners.
In the latter race, Finport Finance (Keagan York, Matt Stenta, Greg Dixon), which won both Race 1 and Race 2 of the championship, held the lead over the first two laps of the three-lap course and looked likely to score another win, but the Smeg team relished the freshening SE breeze to grab the lead and go on to a 24s win.
Jack Macartney, Phil Harmer and Trent Barnabas were never far from the lead and finished in third place, 23s from Finport, and only 5s ahead of fast-finishing Appliancesonline.com.au (Brett Van Munster) and Noakesailing (Sean Langman).
With little between the top teams over the tight courses sailed so far in the championship, the points table reflects the openness of the series with five races still to be sailed. Finport Finance has a total of 11 points from the four races so far, followed by Tech2 on 14 points, Appliancesonline.com.au on 16, Smeg on 20, Noakesailing 22, Shaw & Partners Financial Services and The Oak Double Bay-4 Pines on 24.
Next Sunday's Race 5 of the championship will return to the traditional style course and could see a change in placings on the points table.
An unfortunate casualty in today's racing was Yvette Heritage's Noakes Blue team which broke a mast just minutes before the start of the first race.
Although not finishing in the top six placings of either race today, the Rag & Famish Hotel (Bryce Edwards), Birkenhead Point Marina (Tom Anderson) and Bird & Bear (Tom Clout) teams showed glimpses of good form for future improvement.
Race 5 of the Australian Championship will be sailed next Sunday. Spectators can see all the teams while they are rigging, then follow the racing on board the club's spectator ferry, which leaves Double Bay Wharf, alongside the rigging area, at 2pm.
Book online through the club's website www.18footers.com
AeroMedia Live Broadcast team will be out on Sydney Harbour to capture all the action.  For those who can't make it onto the water, live streaming is available at www.18footers.com and clicking on the '18 Footers TV' link.