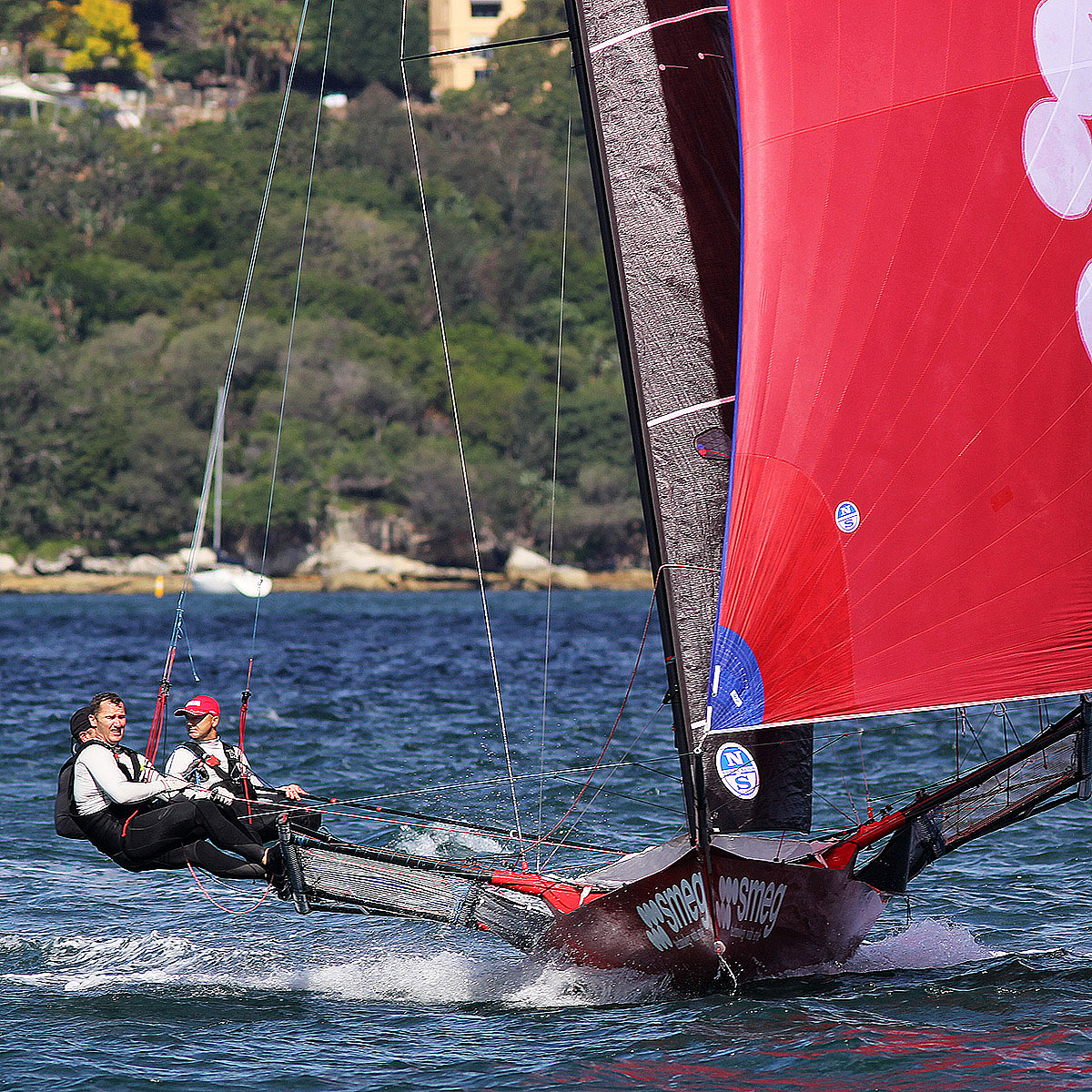 The champion Smeg crew head for home with a 48s lead over Finport. Photo Michael Crittenden.

The defending champion Smeg team of Lee Knapton, Mike McKensey and Ricky Bridge strengthened their grip on the 2017-2018 NSW 18ft Skiff Championship with their second win of the championship in Race 2 on Sydney Harbour today.

A winning margin of 48s makes the win look decisive but the victory was a long hard battle mixed with some good fortune when two early race leaders faltered at the bottom mark on the first two laps of the course. Smeg took full advantage to cross the line ahead of Finport Trade Finance (Keagan York, Angus Williams, Adam Minter) with The Kitchen Maker (Scott Babbage, Sam Ellis, Phil Marshall) a further 1m38s back in thirs place.

Smeg leads the championship on two points, followed by The Kitchen Maker on six points, Yandoo and Noakes Youth, both on 10, Rag & Famish Hotel (Bryce Edwards) on 13 and Triple M (James Ward) on 14.

De'Longhi (Simon Nearn) and Triple M won the start but an early tack by the Asko Appliances team saw the skiff grab the lead when their move proved decisive as the breeze shifted a little to the east of north east.

The breeze was fresh on the first windward leg and on the spinnaker run from the top mark (Beashel Buoy) to the wing mark off Shark Island in Rose Bay.

Asko Appliances held a 7s lead over Finport Trade Finance at the Beashel Buoy and the pair staged a wonderful battle as they raced alongside each other pats Nielsen Park and into Rose Bay.

Quality Marine Clothing (Aron Everett) had some gear problems in the park before the race and were forced to use the smaller #2 rigs while the rest of the fleet had the big #1 rigs.

With a 'kick' in the breeze, Quality Marine Clothing was in third place, ahead of De'Longhi, The Kitchen Maker, Noakes Youth, Triple M and Smeg.

Asko Appliances held off the challengers down the run back to the bottom mark off Clark Island but a capsize as the team rounded the mark sent the team's day down the drain and gave the lead to Finport. Keagan York and his team were as fast as any team on the track and they had little difficulty holding the challenges of Smeg, De'Longhi and The Kitchen Maker at bay.

These four teams had broken away a little from the rest of the fleet which was led by Noakes Youth, Yandoo and Triple M.

There must have been some type of curse at play at the bottom mark as Finport almost capsized in the same spot as the first lap leader (Asko) had done. Smeg took full advantage of the incident and grabbed the lead from Finport, and from that point the win was never in doubt over the final lap of the course.

At the final windward mark Smeg led from Finport, De'Longhi, Noakes Youth and The Kitchen Maker. De'Longhi capsized off the wing mark and had to be assisted to keep off the rocks and was declared a non finisher. A sad end to a really good performance by the De'Longhi team.

The Australian 18 Footers League's Spectator Ferry will follow all the action of the remaining races in the NSW Championship.

Race 3 of the NSW Championship will be sailed next Sunday (10 December). The ferry following that race leaves Double Bay Public Wharf, alongside the clubhouse at 2pm.

Live streaming is also available through www.18footers.com and features commentators who are former 18 footer champions to explain everything that's happening, in detail.