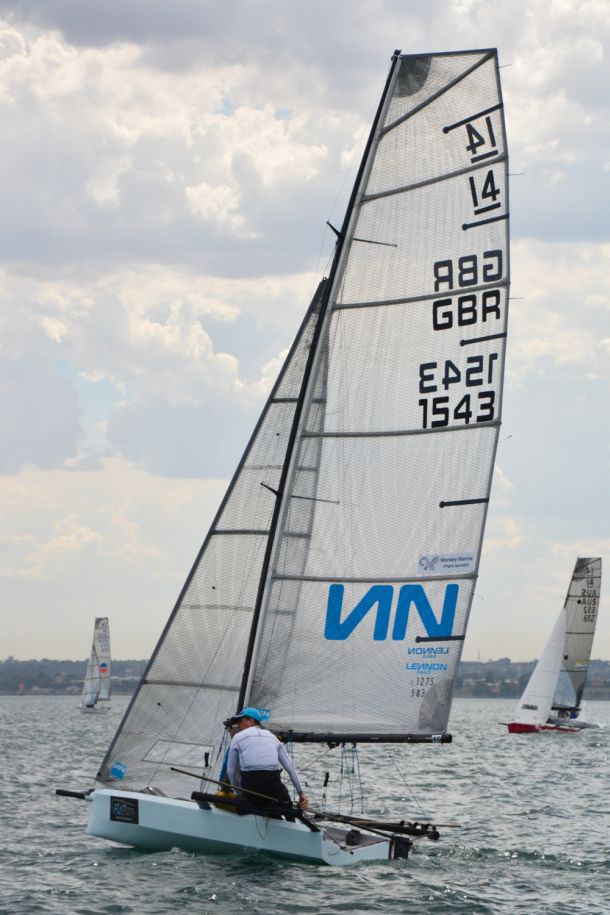 It was a slow start to the official practice race day prior to the first day of the fleet racing in International 14s World Championship being hosted by Royal Geelong Yacht Club.

As the breeze swung and changed pressure and clouds rolled in, Principle Race Officer Ross Wilson determined that the fleet should head out and take advantage of what breeze the race management team could find to run the Invitational practice race.

The 67-boat fleet from Britain, Germany, Italy, Canada, Japan and around Australia were quick to respond pushing off from the beach, then kites up and a soft ride across the bay. For many of them today was a chance to shake out some of the first-day jitters that often comes with this level of competition.

The race started off as a short course in a fading six knots of south-south-east, but was quickly abandoned as the wind shifted 90 degrees, as another thunderstorm rolled in and the fleet were sent home.

Earlier in the day the fleet sat out the delayed start for Practice Race using the time to chat about everything sailing. Hiding from the hot sun, the sailors crouched in the shade of the hard-stand keel boats. In among them sharing stories was 2014 European Championship winner, Glenn Truswell. The British skipper has shipped to Australia his Dave Hollom Departure design, the only one of its kind in the fleet. He raced the boat to fifth in the a 2011 World Championships in Weymouth, England, second in the 2013 World Championships in Toronto, Canada, and first place in both the Europeans and the Prince of Wales Cup.

Innovation is a hallmark of the International 14 class and the sailors continually push the boundaries of what their boats can achieve through the use of new technology and their own smart ideas.

Truswell said this year’s World Championship reflects that constant tweaking of the class equipment. “There are a few new hull designs in this fleet coming to the forefront. They have been around for maybe two or three years, but effectively it takes time for a new design to mature with its crews, its foils and rigs needing time to settle down before it proves itself. Boats in that category at this event are the Beiker 6.

“The I14s are quite complicated, high performance, tuned pieces of kit. It’s not always possible to put a new boat in the water and have the pace of boats that have matured over three or four years.”
Truswell’s results over the last three years has reinforced to him that the new hull designs do need time to mature before their best performance can be achieved.

Another change in the class is the continuing development of the rigs as the sailors make them stiffer and then stiffer again.  “It’s to extract more and more power from these boats,” Truswell said.

“There is a lot of sail on these boats. We seemed to have arrived at a situation where we have very stiff, low drag rigs. So we are using flatter and flatter sails to cut the drag down at high speeds, but we are using very, very stiff rigs to actually prop their performance up and give that rig power when it is light wind. So in some respects we are trying to achieve the best of both worlds scenario when there is not a lot of give in the rig.

“The Australians have been working on this theory for many years and they are very good when it is breezy. But the Europeans are starting to refine it in the light to medium breezes as well. In that respect this design philosophy has started to mature,” he added.
The third most recent change in the class has been with the foils.

“I think that we are seeing the sailors being more efficient with the tools that they have available to them. There is quite a lot of design and engineering going into these boats now from a range of designers notable in America’s Cup, big boats and small boats.”

Truswell doesn’t think his boat’s hull design will be deal-breaker this week. With so many talented sailors in among the fleet and the expectation that those with the Beiker 6 design will see better boat performance at these worlds, he believes it’s going to be tough.

“Our boat transitions from displacement to high performance, flat out planning in all directions quite seamlessly and quite early compared to other boats. If much of the regatta is centred around the seven to 12 knots we will probably be exceptionally strong. When it gets lighter or heavier than that there are definitely boats that can match us.”

Fleet racing in the World Championships starts tomorrow at 2pm. The race management team are anxiously viewing the forecast in the hope that the early, blustery northerly will blow through quickly allowing for racing to start as scheduled.