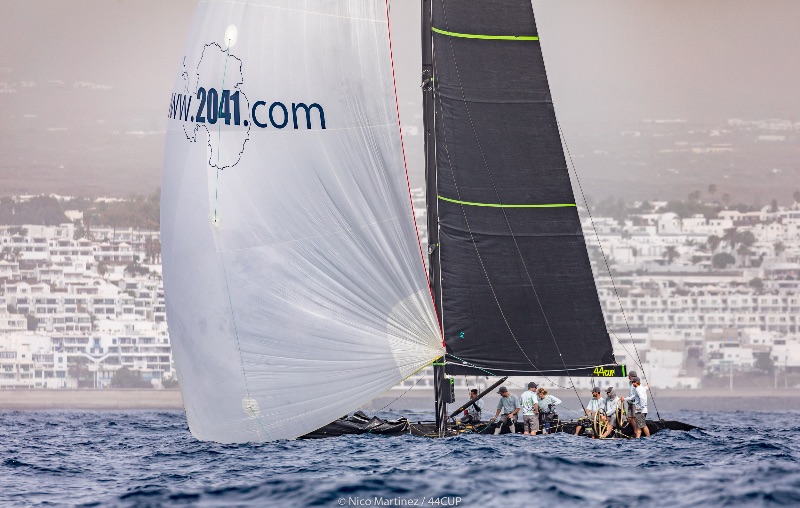 Racing was abandoned on day one. Pic - Martinez Studio

Sadly, no water passed beneath the keels of the 10-strong 44Cup fleet on the opening day of their first regatta of the 2022 season off Porto Calero, Lanzarote.

There was a small hope of the wind filling in early afternoon, but this was too little and of too short duration, explained 44Cup Principal Race Officer Maria Torrijo, who cancelled racing for the day at 1400 UTC: “Today, it was a very easy decision because there was no wind at all. We had a gust of up to five knots, but it was just for five minutes and then it dropped completely. It was like a mirror. So, we decided to stop. We will try to race tomorrow.”

As usual, among the teams there was much anticipation to get the 2022 44Cup season started with a bang today. Michele Ivaldi, the tactician on board Hugues Lepic’s Team Aleph, the defending champion here in Lanzarote after winning the event here in November, added: “There was an opportunity early on today, but it is a funny [weather] system, because there is very strong breeze on the other side of the island [Lanzarote], but nothing here. It is a bit unfortunate, but that is the way sailing is.”

For tomorrow, some forecasts are indicating that we could be in for more of the same, although others are saying 5-10 knots.

The good news will come at the weekend, predicts the PRO: “We are expecting the trade winds coming from Saturday when we will have very good conditions,” says Torrijo.

This is in line with what the sailors are seeing. “It will be good at the weekend with the trade winds coming in,” confirmed Ivaldi. “We might see ‘normal Lanzarote’ then with an offshore, shifty breeze.”

Forecasts are predicting breeze of up to 18 knots on Saturday and Sunday as the northeasterly trade winds re-establish themselves.

In theory racing will start tomorrow at midday UTC.