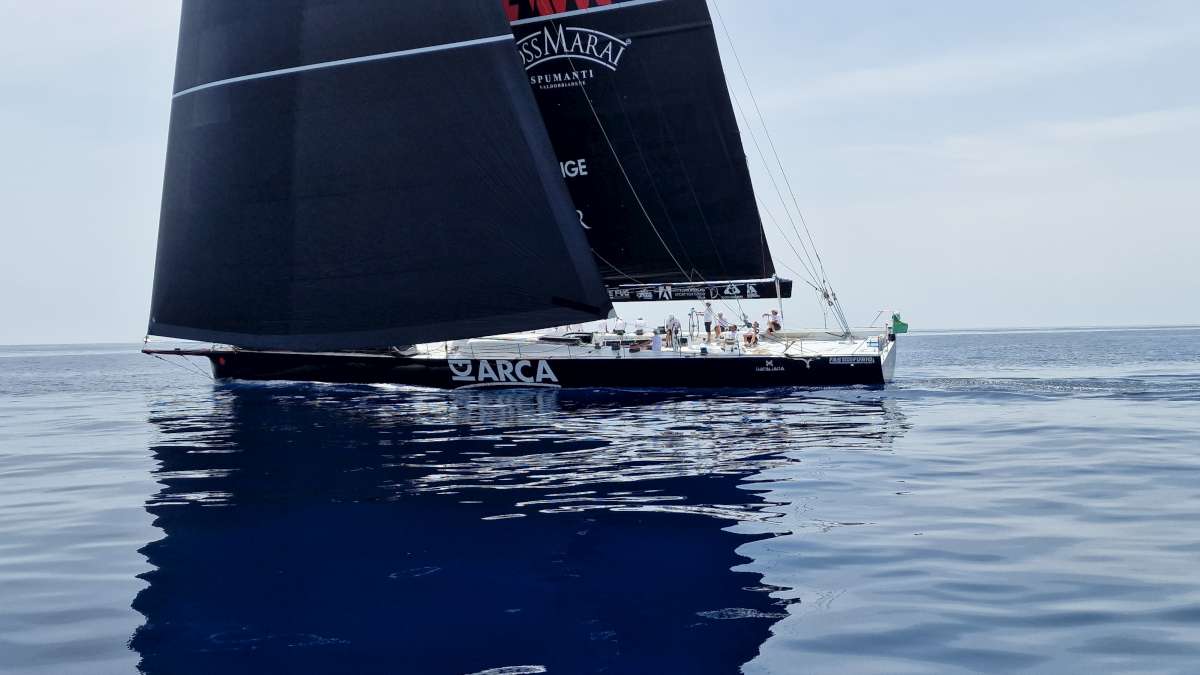 “More food, more water, more sun cream, more good jokes to tell!” was the preparation mantra for French sailing ace Gérald Véniard, tactician on Benoît de Froidmont’s Wally 60 Wallyño, going into today’s start of what most predict will be a slow Rolex Giraglia offshore race, but with the potential to encounter violent localised storms. “Sometimes the race takes 23 hours and sometimes 48 hours. This time it will definitely be 48…”

Appreciating that this year’s 69th edition of the Rolex Giraglia offshore race would be ultra-light, the race committee comprising an amalgamation of staff from the Yacht Club Italiano, the Société Nautique de Saint-Tropez and the International Maxi Association, announced last night that the course would be shortened. Thus the fleet no longer had to head southwest down the coast to the first turning mark at La Fourmigue. This reduced the course distance from 241 miles down to roughly 200. But as Marcel van Triest, navigator on Sir Lindsay Owen-Jones’ Wallycento Magic Carpet Cubed observed: “It is not about the distance, but you are using the good wind to go the wrong way.”

The maxi fleet was first to get underway from the Golfe de Saint-Tropez at 1200 CEST and so with the new course, they were able point their bows directly towards the Giraglia rock off northeast Corsica. Among the 141 entries, sent off in three starts, were 20 maxis, competing in what is the fifth of seven events in the International Maxi Association’s 2021-22 Mediterranean Maxi Offshore Challenge. Following three days of inshore racing, the fleet had swelled with several maxis arriving just to take part in the offshore. These included the defending Rolex Giraglia line honours winner (and recent outright winner of the 151 Miglia Trofeo Cetilar) Furio Benussi’s 100ft ARCA SGR, the 72ft Sam Manuard-designed Black Legend 6, Jean-Pierre Dreau’s Mylius 60 Lady First III, Jean-Michel Caye’s Vismara 80 Luce Guida, Mylius Yachts President Luciano Gandini on board his highly successful Mylius 80 Twin Soul B and the glorious 33.5m long Herreshoff gaff schooner Mariette of 1905.

Fortunately for start time east southeasterly winds of 5-7 knots were enough to get the fleet away, the towering rigs of the maxis able to find breeze high off the water. Strategy was coming into play from out of the blocks with some such Charif Souki’s all black Wallycento Tango preferring to stay high (ie to the south) but with others such as ARCA SGR and Jean-Luc Petithuguenin’s Wally 107 Spirit of Malouen departing from the rhumb line to the Giraglia rock and heading north.

So how will this race play out? “Slowly” seems to be the only consensus.

Flavio Favini, tactician on Alessandro Del Bono’s IMS maxi Capricorno advised: “We think it will be a patience game. We know we are going to face a light air edition. All of us have done the Rolex Giraglia for many years and we know that when we leave the coast it will be glassy. We’ll have to make sure we have enough food and water.”
Capricorno’s routing shows an ETA of 0600 on Friday. Or 1800.

Tango’s strategist Thierry Peponnet reckons: “It could be long! The routing is saying something like 40 hours. We have some weather files that show storms developing off Frejus, which could bring 40 knots for around two hours at 2000. We hope it will not be the case because all the rest of the course will be light airs. We shall see.”

Probably the most experienced router/meteorologist in the fleet is Magic Carpet Cubed’s Marcel van Triest who said their routing was showing “about 36 hours or so to get very close to Genoa! That could be ‘get in on Thursday evening with the last of it’ or you could spend the night looking at the lights of Genoa…” Key is arriving before 2100-2200. Wallycento knows the way well having claimed line honours in 2013 and won the race outright under IRC two years later. And Peponnet’s storms? “If you look at the AROME models it is says gusts of 70 knots. That is model weirdness – but I hope that Tango brings the sails for that!” Magic Carpet Cubed had reduced their crew size down from 23 to 18.

Gérald Véniard on International Maxi Association President Benoît de Froidmont’s Wallyño advised: “It will be a race where you shouldn’t take too many risks because nothing is written… It is a general situation with zero pressure and no isobars. There are small things that won’t happen or if they do they won’t be in the forecast position. Every model, shows a different strategy. Nothing is trustworthy.

“It will be a race for the trimmers and crew to try to make the boat as fast as possible constantly. We have a strong team and a boat that is very well prepared for light winds.”
In the maxi fleet one of the boats set to have to the longest race will be Mariette of 1905.

French sailing legend Halvard Mabire is navigator on board supported by his British wife and Vendée Globe competitor Miranda Merron, who gave her take on what’s in store: “The weather is looking very complicated because there are a few low pressure storms floating around and not much of a pressure gradient. So it will be complicated, ‘eyes out of the boat’ and I doubt very much it will be a straight line course. There are some troughs and the forecast shows some very violent thunderstorms. If that is the case, the jackyard needs to come down. On Mariette sails take time to handle.”

The arrival deadline for the Rolex Giraglia is 1000 CEST on Saturday. This will be followed by a prizegiving at the Yacht Club Italiano.