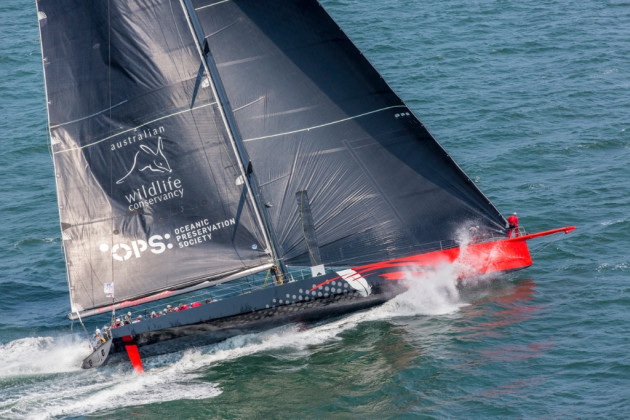 Newport RI: May 31, 2016 — In what promises to be the third largest race in its 110 year history, the 50th Bermuda Race now expects to see 192 boats on the starting line in Newport on June 17. This 50th edition of “the Thrash of the Onion Patch” has one of the largest and most diverse fleets of monohull oceangoing boats since the race was founded in 1906. Only two other Newport Bermuda Races have been larger, the Centennial Race in 2006 with 265 boats and the 2008 race with 197.

Regular entries range from the superfast 100 footer ‘Comanche’ going for a line honours record and the top Open Division prize, the Royal Mail Cup, to several 35 and 36 footers and the defending St. David’s Lighthouse Trophy winner, ‘Actaea’, a Hinckley Bermuda 40. The largest entry, in the Spirit of Tradition Division, is the schooner ‘America’, which measures in at 140 feet overall.

The Bermuda Race Organizing Committee, which runs the race for the Cruising Club of America and the Royal Bermuda Yacht Club, expects that this large fleet will bring nearly 2,000 sailors from 26 countries to Bermuda. Add Racer Chasers and return crews to that to estimate an even greater impact. The two clubs have collaborated in running the race since 1926, making this year a dual anniversary—the 50th Bermuda Race and the 90th anniversary of their partnership.

As of May 31, 112 boats were entered in the St. David’s Lighthouse Division for racer-cruiser boats and 43 were in the Cruiser Division. In these two divisions, professional sailors are not permitted to steer.  The next-largest division is for Double-Handed boats with only two sailors each, and it had 19 boats to date.

Seven boats were entered in Gibbs Hill Lighthouse Division, for mostly professional crews. The Open Division, for boats with movable ballast and power-driven winches and furlers, had four  entries, along with 11 Gibbs Hill and St. David’s boats whose owners have decided to race in both the Open Division and in one of the two Lighthouse Division for two prizes.  Three boats have not yet been assigned to their division.

More than 140 of this year’s entries are smaller cruising-racing boats sailed by amateur sailors. ‘Actaea’, Michael Cone’s Hinckley Bermuda 40, is back to defend her title as the 2014 winner of the St. David’s Lighthouse Trophy. Like many sailors, Cone has long had Bermuda Race fever. The 2014 race was his 12th on ‘Actaea’. He was dead last in his first race.

The fleet's striking diversity is enhanced by the Spirit of Tradition Division, whose four entries (all older or historic designs) include the ‘America’, a replica of the yacht that inspired the America’s Cup, and the traditional “Bermuda sloop,” the 112-foot ‘Spirit of Bermuda’.

A very different entry is ‘Comanche’, Jim and Kristy Clark’s 100-foot all-out, high-tech racer and likely the fastest boat in the fleet. Sailing the Open Division, her largely professional crew is aiming to break the 39 hours, 39 minutes elapsed time record set in 2012 by George David’s ‘Rambler’. With an average speed of 16 knots for the 635-mile race course from the start at the mouth of Narragansett Bay to the finish off St. David’s Head, Bermuda “Rambler' set a high mark.

The fleet’s variety does not surprise Race Chairman A.J. Evans, who said, “The Newport Bermuda Race continues to attract monohull yachts from mostly amateur cruisers to professionally crewed racers with a variety of rigs, designs, hailing ports, and vintages.”

The race’s more than 100 prizes include replicas of Bermuda’s two lighthouses—St. David’s and Gibbs Hill—and numerous other trophies dating back to the race’s early days. They and the race’s awards will be presented on June 25 at Bermuda’s Government House. For the first time in the race’s long history, special prizes will be awarded to boats crewed by young sailors. Other prizes are for crews with several family members and for top boats from diverse regions of North America.

Add the other two Onion Patch Series events for even more diverse racing. Many Newport Bermuda entries are also eligible to compete in the series with races in the New York Yacht Club’s 162nd Annual Regatta presented by Rolex in Newport the weekend before the Newport Bermuda Race and then in the Royal Bermuda Yacht Club’s Anniversary Regatta in Bermuda.

Yachts racing in the Newport Bermuda Race may still enter the entire Onion Patch Series or choose to add either the NYYC regatta as a warm-up or the RBYC races as a unique racing opportunity in Bermuda. Both events offer racing courses or the second edition of the Navigators Series with ‘round the cans’ courses.  See OnionPatchSeries.com for information and entry.