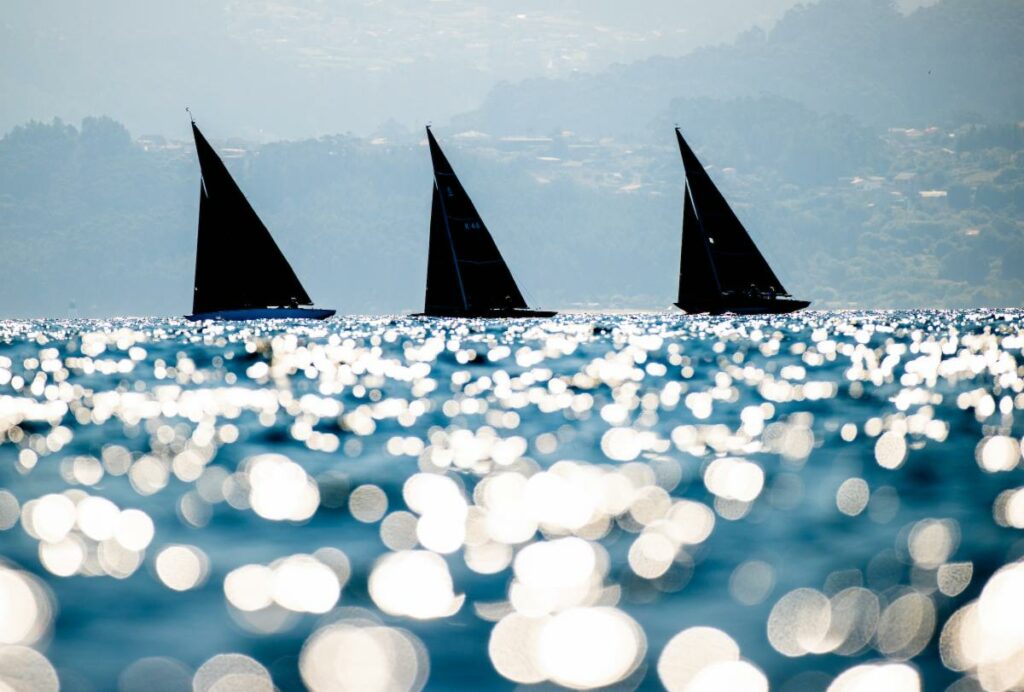 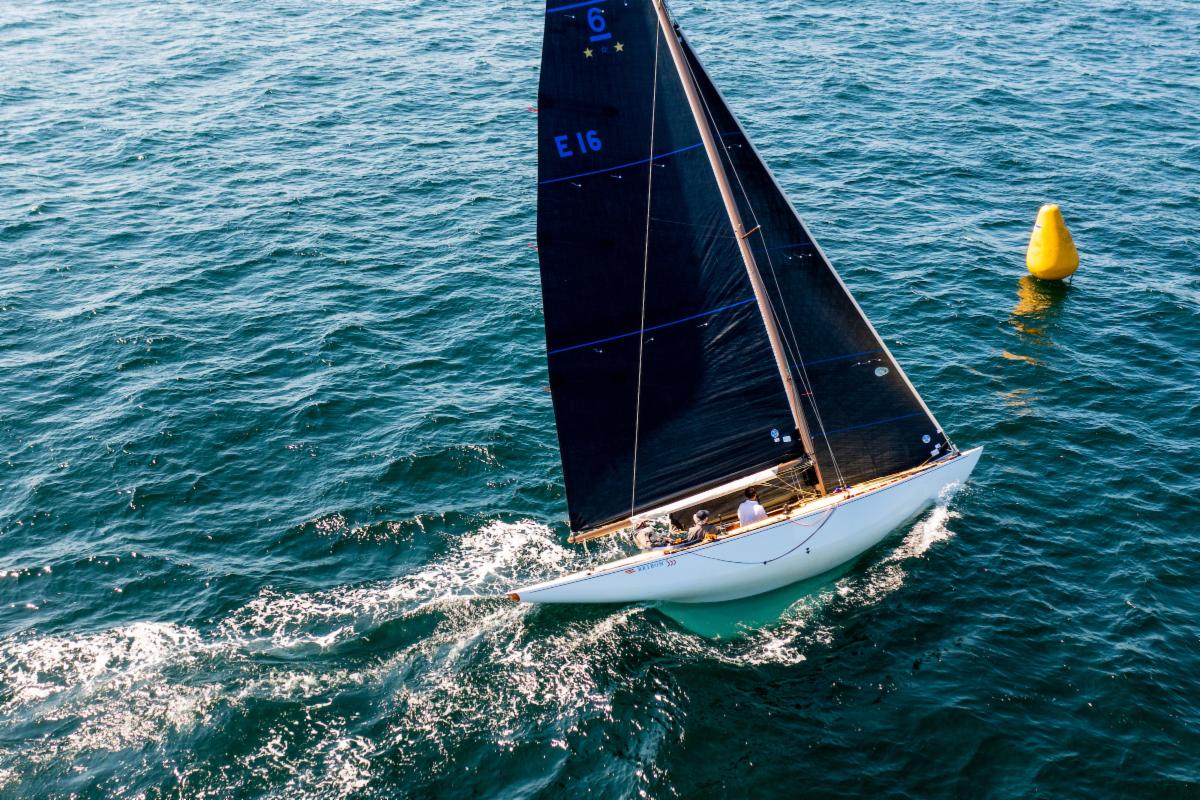 A steady 12 knots from the northeast and glorious warm sunshine made for a near perfect third day of racing at the Xacobeo Six Metre European Championship in Sanxenxo.

After two days of very light airs the change of pace was welcomed by all and resulted in some new faces featuring at the front of the fleet. With six of the scheduled eight races completed and the single score discard now introduced, the rankings remain incredibly tight in both the open and classic divisions.

It was clearly a day when a little bit of local knowledge went a long way with the top scoring boat in each division hailing from the host club, Real Club Nautico Sanxenxo (RCNS). In the open division Violeta Alvarez’s Stella led race five from the off and was never seriously challenged. She also initially led race six until Rainer Müller’s Thisbe helmed by Michel Teweles snuck past her on the second lap. Her first and second place move her up the leader board from tenth to seventh.

Thisbe’s race six win combined with a third in race five reinforced her hold on the open division where she now leads by four points. Patrick Monteiro De Barros and the crew of Seljm continue to sail very consistently and today’s fifth and fourth places move them up a place into second. Philippe Durr’s Junior found the stronger breeze to her liking and climbed from fifth to third overall, two points behind Seljm.

It was not such a successful day for Claes Henningsson’s Notorious who was over the line in race six and finished tenth in both races, dropping them from second to fourth overall and onto equal points with both Richard Göransson’s Filippa and Hugo Stenbeck’s Sophie Racing.

After racing Junior’s Nicolas Berthoud was pleased with their day saying, “It was a really great day out there today, tight racing and a lovely wind at 12 knots. All the boats are fast, and the game gets really close. We managed to find our way and took a second and third today which was excellent. We were pretty conservative in the middle of the track and had good speed. Our objective today was not to lose any points and we managed that so we were pretty pleased to do so.”

Jose Cusi’s Bribon 500, helmed by RCNS President Pedro Campos, produced two confident wins in the Classic Division, but overnight leader Astrée III did not fare as well finishing eighth in race five, her worst result of the regatta, and sixth in race six. As a result, the Escotet/Botas owned Aida, helmed by Francisco Botas Ratera, who added two thirds to their card today, now lead the Classic Division by a single point from Bribon 500.

Miguel Lago Cereceda’s Alibaba II went from one extreme to the other finishing eleventh in race five and second in race six. Alibaba II and Astrée III now both count sixteen points and sit in third and fourth overall classics respectively.

Pedro Campos was pleased with their day, saying, “For us today has been the best day of this championship. We made two very good starts and the boat had a point more speed than the others, especially upwind, which allowed us to reach all the buoys in the lead and even gain a considerable advantage in the last race. All this puts us back in the fight for the championship, when yesterday it seemed like a very distant possibility.”

Back ashore the RCNS once again welcomed the crews for the traditional post sailing drinks and snacks. One of the great joys of a Six Metre regatta is talking about the boats, each of which is unique and many of which have fascinating pasts. It’s also wonderful to meet people from all around the globe who share a passion for these extraordinary pieces of sailing equipment.

Taking part this week are sailors from Europe, North and South America, Australasia, and Asia.

Representing North America’s Pacific Northwest Fleet are the crew of Classic Six Elisabeth X. The difficulties of international travel due to Covid almost prevented the team, who are largely based in Seattle, from attending, but fortunately relaxations came just in time to allow Adam Henley, David Linger, Erin Parker, Chance Bates and Andy Parker to be here, much to the delight of their fellow competitors.

Elisabeth X was designed and built in 1947 by the great Norwegian designer and boat builder Bjarne Aas, who was also created Aida, Astrée III and Dix Août. Looking at the four boats on the dock is like a little walk-through history as they were built over a period of some 23 years with Aida completed in 1936, Dix Août in 1950, and Astrée III in 1959. Each yacht was ground breaking in her time and you can clearly see the development trail when you study them as a set.

The Six Metre Class dates back to 1907 and the introduction of the International or Metre Rule. Ever since it has been a hotbed for technical innovation with the world’s leading yacht designers and sailors bringing often radical concepts and technical excellence to the fleet.

An Olympic Class from 1908 to 1952, the Sixes were also frequently used as a development testbed for the America’s Cup 12 Metres. The rule was periodically updated to keep the class at the forefront of technical development, whilst at the same time honouring its extraordinary heritage.

Even today that tradition of innovation continues as the newest boat in the fleet, the 2020 Javier Cela designed Ginkgo Too owned and skippered by Jann Eckert, is clearly demonstrating. Due to Covid this is her first major regatta, so she has been playing catch up against the more established teams, but each day her results are improving as her crew hone her performance and she now lies in eighth place overall in the open division.

What is also remarkable is how competitive the boats remain regardless of age. This week the Open Division, featuring the Modern Sixes, cover a 40-year age range from 1981 to 2020 and all are racing on a level playing field. The Classics cover a 30 year age range at this event from the 1929 Acacia III to the 1959 Astrée III.

Two races remain to be sailed in the eight race series which concludes on Saturday 18 September.

For the full results, see: https://6mreuropeans2021.com/en/results