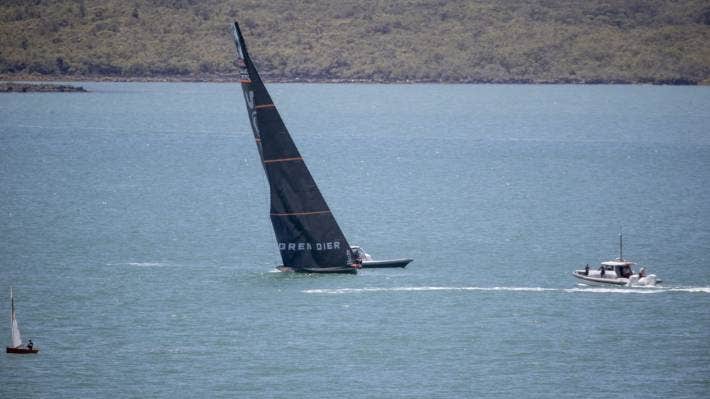 INEOS Team UK struggling to get up on their foils in the light breeze where team New Zealand were looking impressive. Photo David White/Stuff.

Sir Ben Ainslie’s new America’s Cup boat has been labelled “the lamest of ducks” in a damning summation on the eve of proper racing.

British pundit Magnus Wheatley has delivered a brutal blog on Ainslie’s chances as the INEOS Team UK boat sits behind closed doors being desperately worked on after missing the first two days of official practices.

Wheatley likened it to the feeling of the midweek club racers who regularly experience “the utterly deflating feeling of hauling a boat that is at least two clicks slower around a racecourse”.

But he then got serious in an article making major allegations of internal unrest in the struggling syndicate that is desperate to make up for a disappointing effort at Bermuda 2017.

“Well, imagine how you’d feel if you’d just blown £120 million of someone else’s money and have an absolutely balls-out racing machine laden with some of the best sailors on the planet, a supercomputer or two to measure a billion points of data a day and you’re still way off the pace,” Wheatley wrote in his Rule69 blog headlined “Panic Stations”.

“The first time you take it to a racecourse, it breaks. You then scuttle back to base, close the doors and silently weep.”

Read the rest of the story and see more images at Stuff.