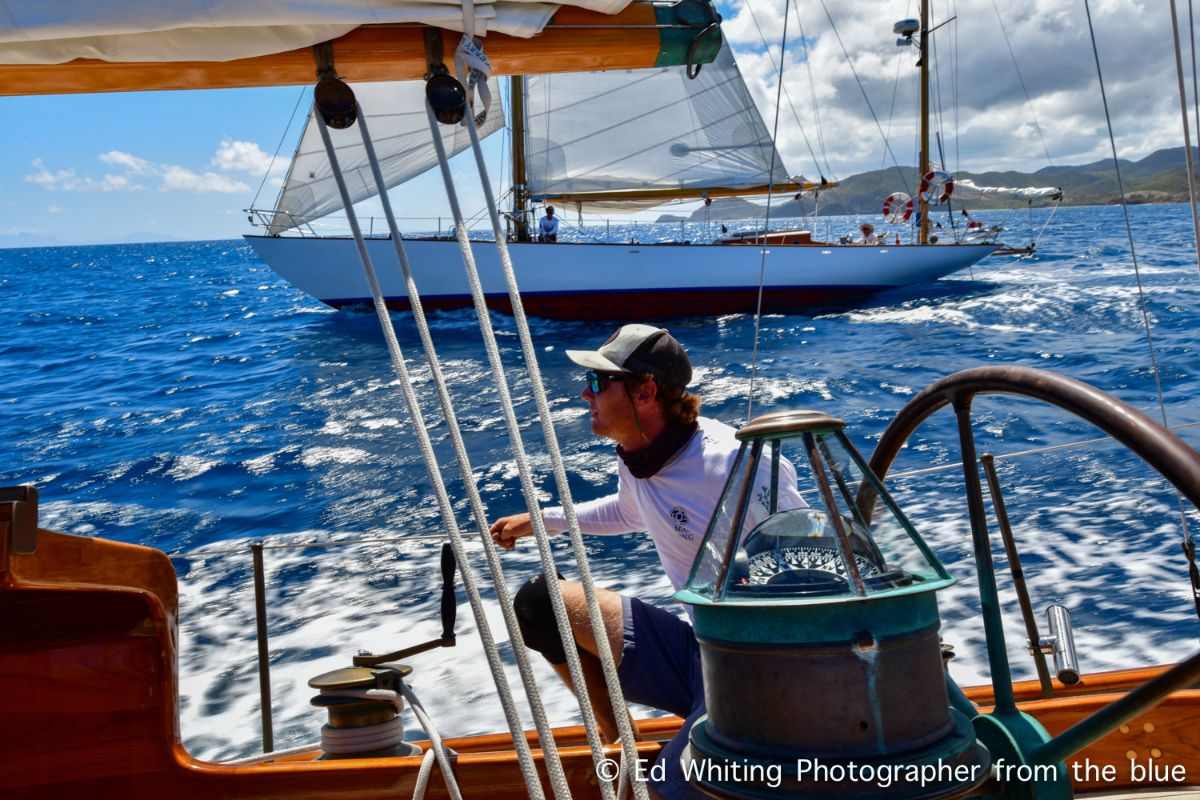 Eleven stunning examples of classic yachts took part in a stand-alone race lasting just over one hour along the dramatic south coast of Antigua. With moderate trade wind conditions of 14-16 knots, and a relatively smooth sea state, perfect conditions prevailed for the almost unique phenomenon of racing classic yachts single-handed.

Skippers raced solo without the use of auto-pilot, but were allowed an observer on board, who could not participate in sailing the boats.

Tanner Jones and Tony Sayer were sharing a drink at the Carib Bar after racing. “We go back a long way, and are good mates. We were racing against each other, but really we were enjoying a great time on the water,” commented Tony Sayer.

“Great fun, but Rita is a complex boat, so I am glad we will have a full crew for 'classics,” commented Tanner Jones.

“My two children, who are eight and 10, will be joining us for a few races, and they are great sailors already, 'Classics is sure to be a lot of fun for them as well,” Tanner said.

“We often sail Mah Jong short-handed, just me and the mate, but I have never raced her single handed before,” commented Alex Goldhill.

“The boat is quite easy to sail once the mizzen is down, because everything else is led to the cockpit. I have to say the start was a moment to remember, with all three boats reaching over the top of each other, my heart was in my mouth.

“Mr Illderton, the owner of Mah Jong, won the race last year, so it was nice to keep up the tradition. The plan for Mah Jong for the classics is not to break anything. We want to have fun, and sail the boat as well as she deserves,” said Goldhill, who grew up in Carriacou, Grenada, but is now based in Martha's Vineyard, the home port for Mah Jong.

Oliver Greensmith skippered the 1936 A&R 41', Seefalke II, to victory in the Small Classic Class. Greensmith had his brother Giles on board as an observer.

“Oliver lives in Antigua with his family, and we’re having a big reunion in Antigua. We have flown in from the UK and South Africa,” Giles Greensmith said.

“Oliver did not get a good start, as we were last to the first mark, but we got back in the lead on the downwind leg. At the finish, Lazy Leg was to windward, and beat Seefalke over the line by a few seconds. I will be racing with the team for 'classics on the bow. I am a little nervous, but it's a really experienced crew.”

Schotman was resplendent in a Caribbean style suit at the prize giving, and was enjoying the night with his crew: “We have just crossed the Atlantic together and now we’re at 'classics, which is just fantastic!”

The fun doesn't stop after racing at Antigua Classic Yacht Regatta. The Sea Shanty competition was in full swing on the lawn of the Antigua Yacht Club, with crews taking to the stage for their ad-lib performances, assisted by the odd tot of Mount Gay Rum.

Sea Shanties were commonly sung to accompany labour on board large merchant sailing vessels. However by the end of the 19th century, steam-powered ships took away the practical function. At Antigua Classic Yacht Regatta, this tradition is very much alive. Check out the Regatta's Facebook page for evidence!