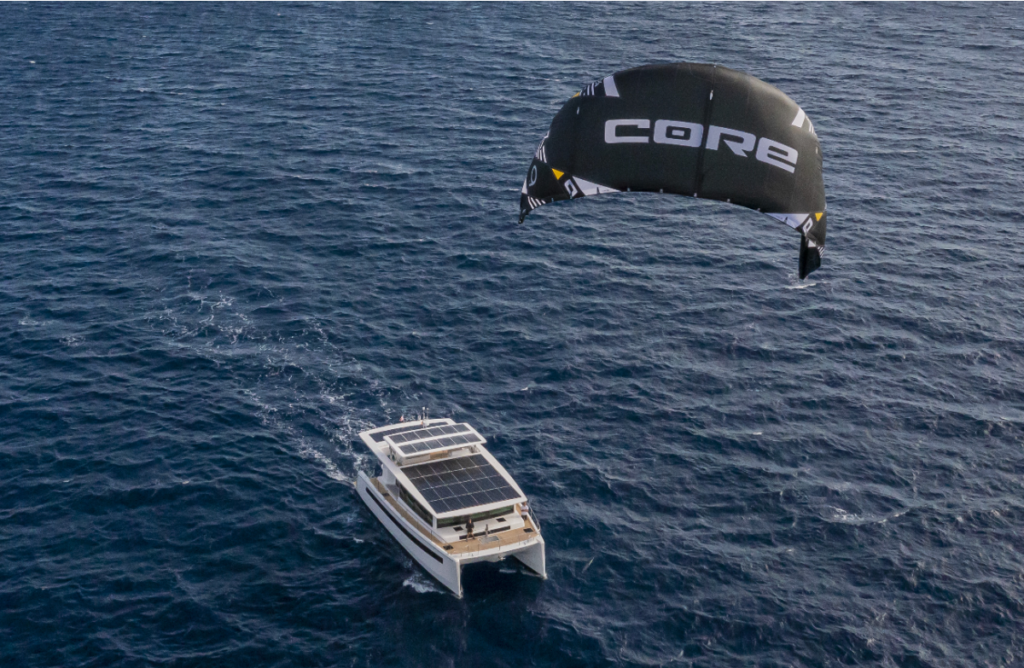 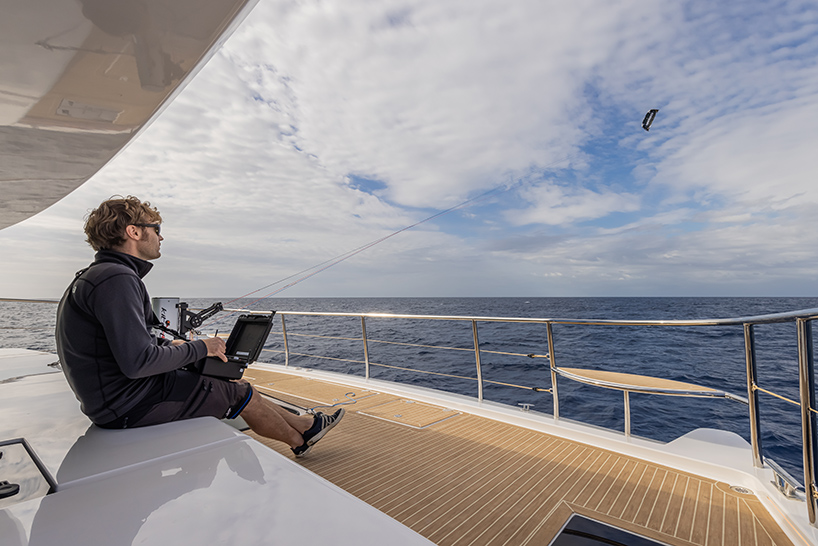 Controlling the kite wing from the back deck. Pic - Silent-Yachts 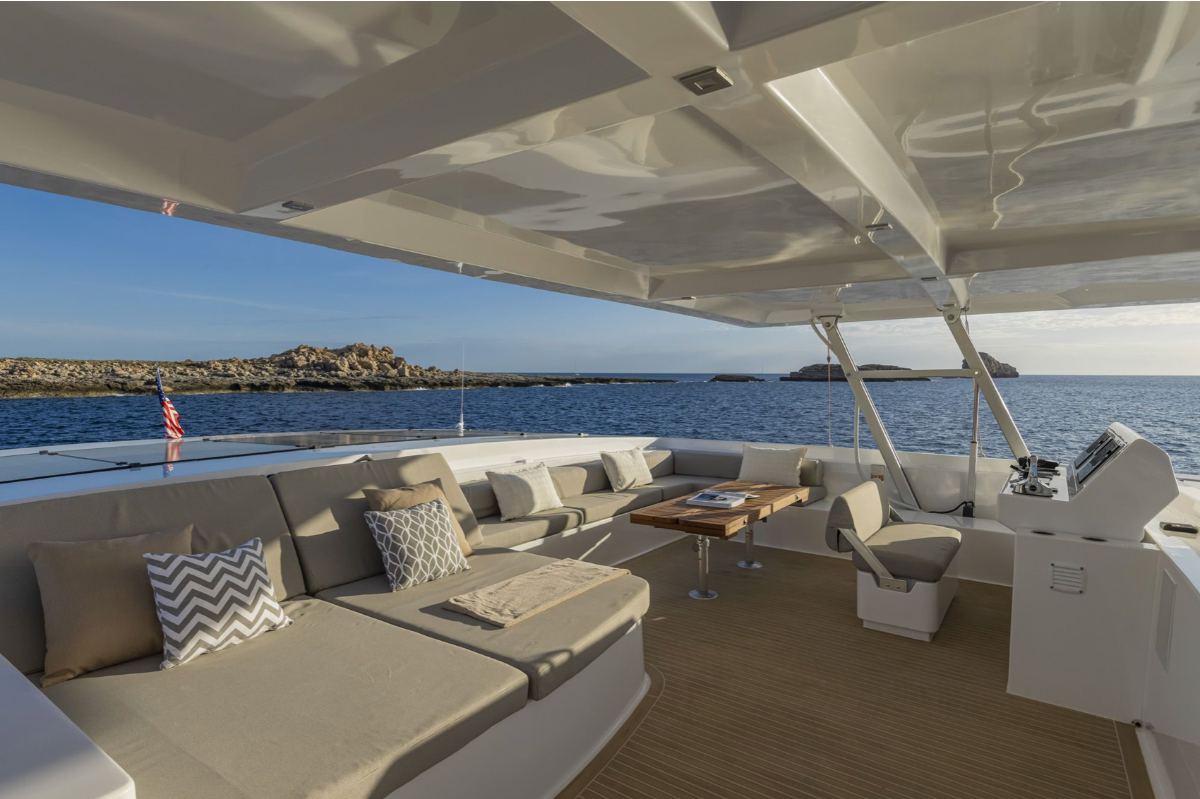 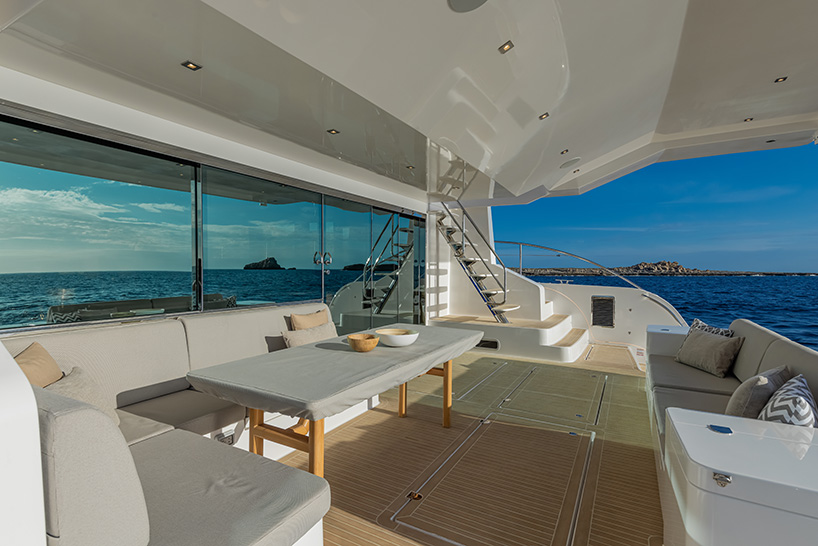 Plenty of outdoor space on the Silent 60. Pic - Silent Yachts

Several years after presenting the first and only ocean-going production yachts in the world that are fully sustainable and powered by solar energy, Silent-Yachts now is the first boat builder to date to design and build boats for the use of a kite sail system.

The new Silent 60 solar powered catamaran carries 42 solar panels for 17 kWp of solar energy to power two electric motors of up to 2x340kw. Backed up by a battery capacity of up to 286 kWh, the yacht can cruise efficiently with zero emissions solely on solar power for up to 100 nautical miles a day for weeks.

To further improve its green credentials and range, for longer crossings the first Silent 60 is also fitted with a compact nine or 13-square metre kite wing. The kite wing is optionally available on all models.

A dedicated storage locker under the foredeck houses the kite wing and all its components, including an electric winch and a short, collapsible mast. On the first unit the mast is connected by four shrouds to pad eyes on deck that distribute the forces through the hull structure, but on subsequent deliveries (eight units with the kite wing option have been ordered to date) the mast will be mounted on a baseplate inside the locker to leave the foredeck clutter-free.

After inflating the kite, it is released overboard to drift away on the surface of the water. Pulling on the lines launches it into the air and once it reaches the optimal flight height, it begins to trace a figure 8 in the sky and generates power to pull the yacht.

If you want to stop kiting, the automated app controls move the kite to a position right above the boat where it has the least pull on the line. From here it can be winched down electrically and collapsed over the foredeck ready for stowage.

“The main advantages of a kite over a conventional sail system are that it does not throw shade on the solar panels, does not need a tall mast, and generates up to 10 times more power per square metre than a traditional sail. In addition to that it saves about 1,5 tons of weight compared to conventional rigg and costs much less,” says Michael Köhler. “It makes even more sense for the Silent boats that run on renewable solar energy because the power generated by a kite easily exceeds the energy consumption of the system, so you can charge the batteries while cruising under kite power. And besides that, it’s great fun!”

“We tested the performance on different headings and at wind angles of up to 40 degrees with the 9-sqm kite,” says Silent-Yachts’ Captain Mike Wandler. “Unlike a conventional sailing boat, the best results were directly downwind. Under kite power with no engines on or propellers turning, the boat speed was between 4 and 5 knots. We then switched on the electric motors drawing just 1kW each to reduce drag from the propellers and improve the flow of water over the rudders for better steering, this led to boat speeds from 6 to 7 knots over the same headings – a significant improvement on our original predictions.”

A big advantage of a kite compared to a conventional sail is, that the kite flies in much higher altitudes and therefore gets more steady and stronger winds up there. Therefore, it can already be used at low wind speeds of less than 10 knots, when it would not make any sense to hoist a sail on a sailing boat of comparable size.

As the kite rather pulls the boat than pushes it like a conventional sail, it requires good steering capabilities, which are compromised by the fact, that on a motorboat the rudder is typically pretty small and the propeller big. On a sailing boat it is the opposite. For this reason, it is difficult to steer a motorboat that is being pulled by a kite, but by turning on the motors, and by letting them run at a low speeds of 100 rpm this problem can be solved.

But only on a Silent Yacht it is possible to run the electric motors at such a low rpm powered solely by solar energy and without consuming fossil energy. Any conventionally powered boat would need to run the diesel motors permanently when using the kite.

“At five Beaufort we can drive with the kite indefinitely at six to seven knots, which is faster than a comparable sailing catamaran in such wind condition when crossing the ocean, for example,” adds Michael Kohler.

The first Silent 60 has four guest cabins on the lower deck, including a spacious master suite, but other layout solutions are available. There are numerous social areas on board, including an airy main salon, an aft cockpit, a cosy bow area and a flybridge. The yacht also has high headroom throughout (up to 2.32m in the main salon).

Thanks to a draft of under 1m the yacht can access shallow bays, a crucial consideration for cruising grounds in the Caribbean and Southeast Asia. Two swimming platforms in the stern can be extended on owner’s request to carry a pair of electric jet skis. The lifting hydraulic platform between the two platforms can carry a four-metre tender.

The Silent 60 is equipped with the company’s ventilation system, which provides cool and fresh air to all the interior guest spaces and can be individually adjusted to suit conditions. In addition, a reverse-cycle heat-pump system cools and heats the interior for all-season comfort. The insulated hull ensures that stable on-board temperatures can be achieved without excessive energy consumption.

A watermaker powered by solar-energy produces enough water to supply a full complement of guests. All on board appliances operate on the 220/110-volt system. The galley has good refrigerator and freezer space and an efficient induction cooker that precludes the need for carrying propane gas.

The Silent 60 is designed to go everywhere as a true bluewater cruising yacht. The solar-electric system is configured to power all the on-board systems without the need of fossil fuels for a generator. Featuring a new, high-performance hull form with a longer waterline and reverse bow, the yacht has a cruising speed of 6-8 knots, but can reach 20 knots if needed.