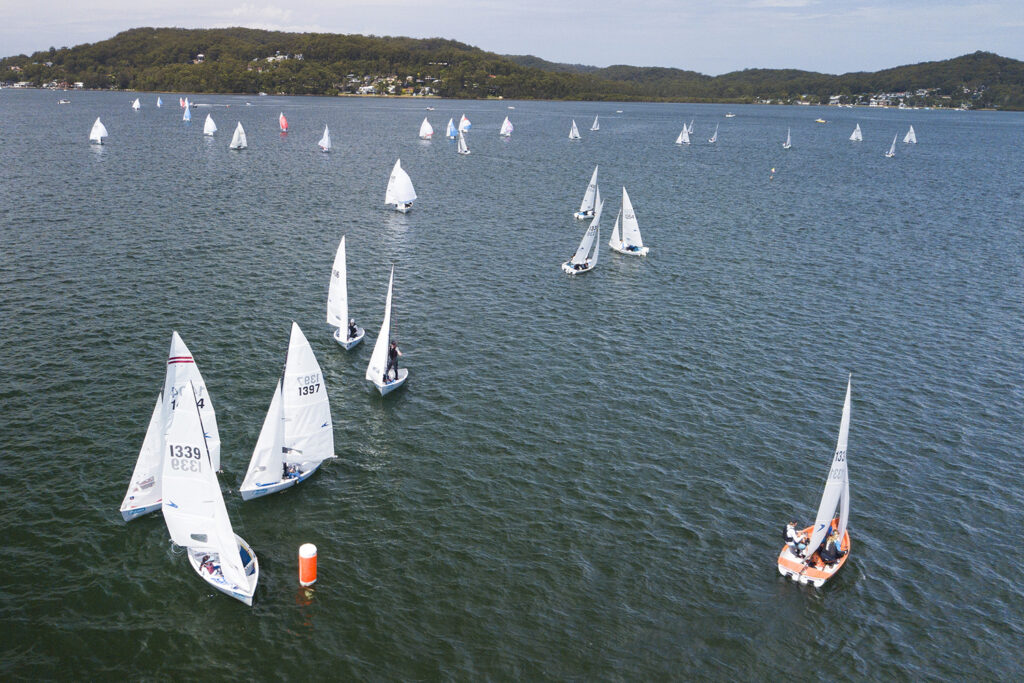 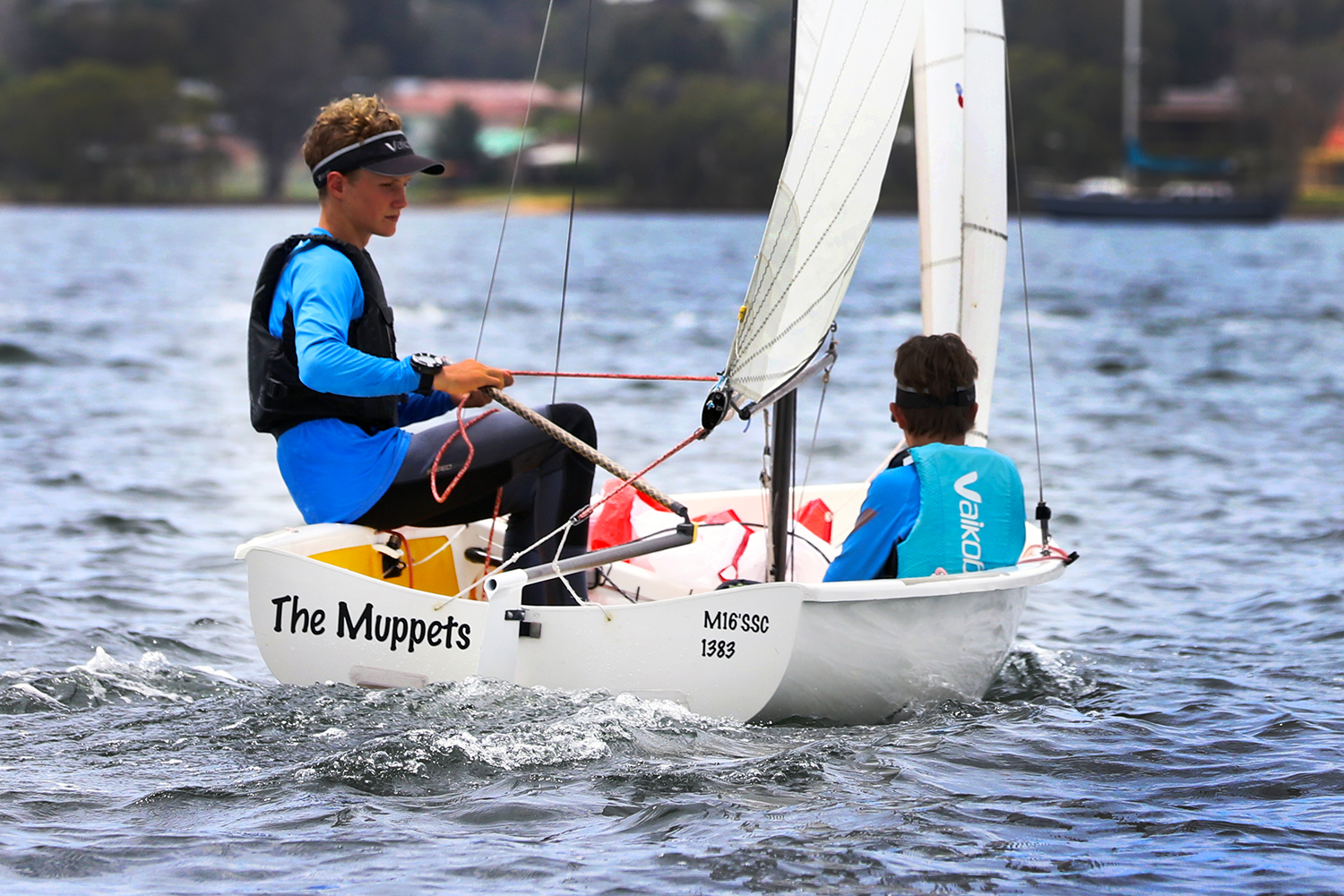 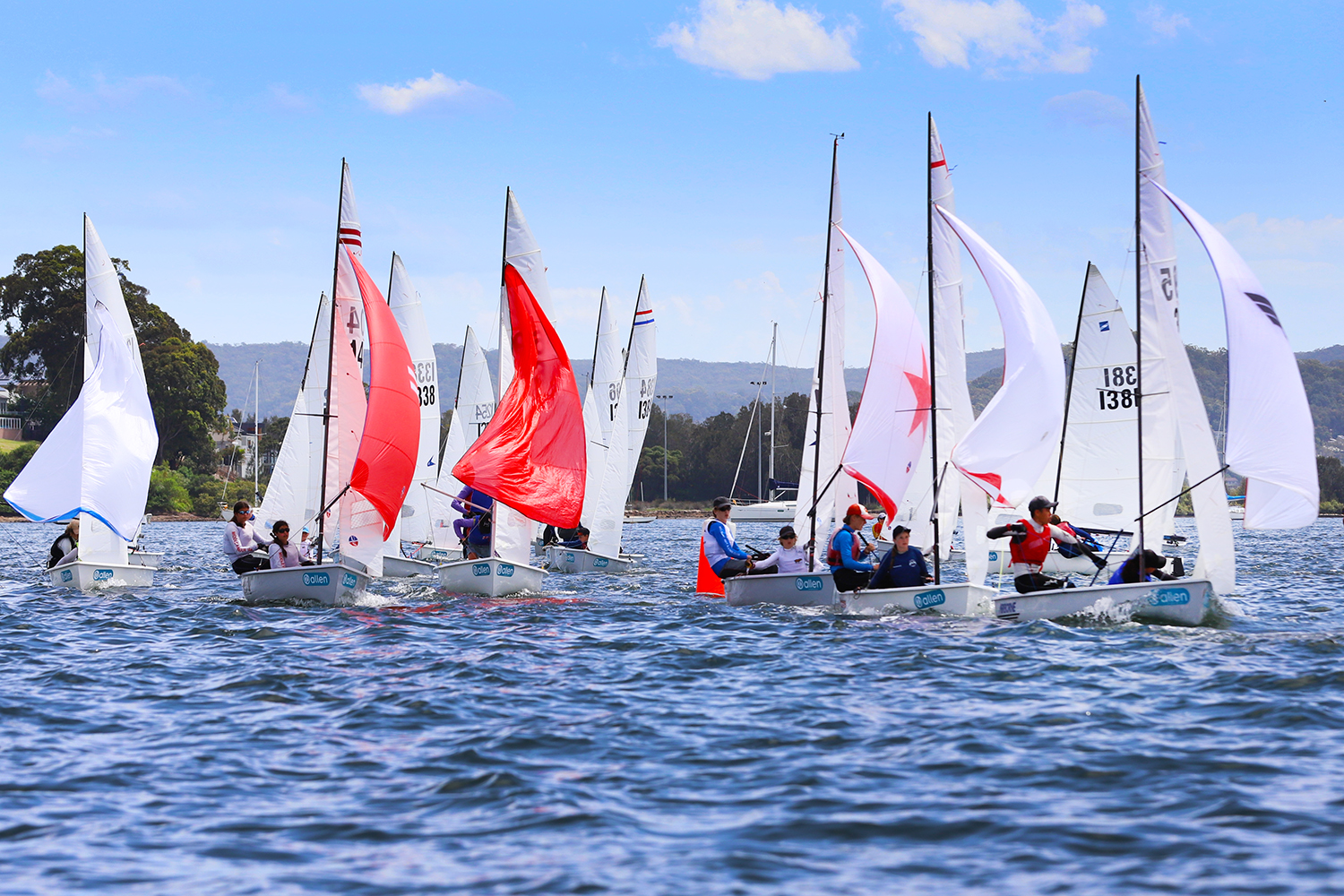 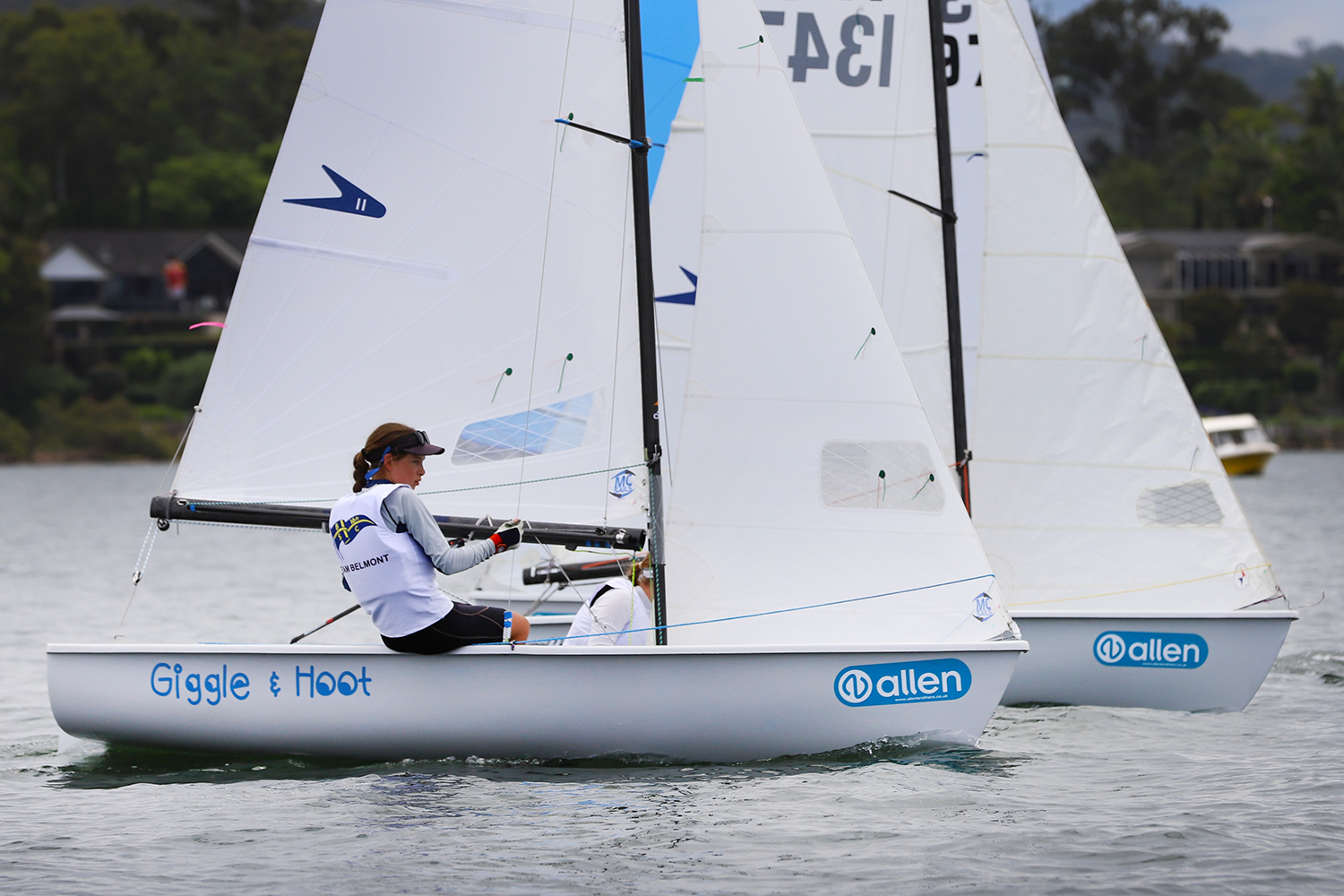 The first all girls team - Giggle and Hoot. 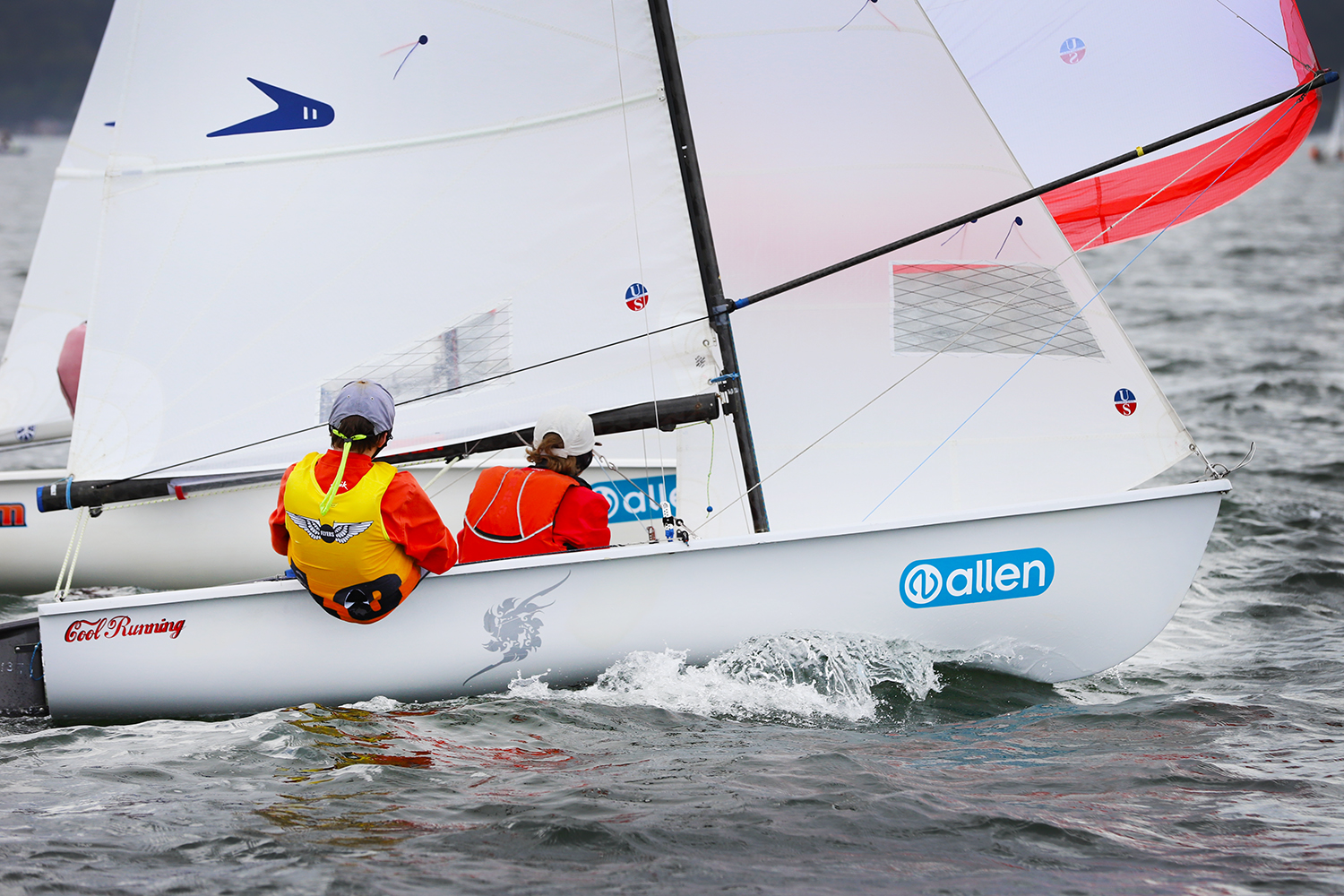 With Queensland to host the Olympic sailing ten years from now, it’s possible that some of our future representatives were competing in the 2022 Allen Flying 11 Australian Championships at Gosford Sailing Club last week, in particular a brother and sister competing on separate boat.

It was watching the 2000 Games in Sydney that ignited the passion of Gosford local Tom Slingsby, who went on to win multiple consecutive world championships and Olympic gold in the Laser class, and Brisbane should provide a similar incentive.

Right now the talent of 2032 are likely aged 10 to 15 and a golden opportunity awaits, based on the skills displayed at the Flying 11 nationals. It helps that the two-handed class is a highly competitive, high-performance training platform for both the 49er and 470 classes, with a proven track-record over many years.

You just have to look at some of the names who’ve progressed through the class into the Olympic realm: Malcolm Page, Nathan Wilmot, Nathan Outteridge, Iain Jensen, Olivia Price, Nina Curtis and Katie Spithill, along with legends Iain Murray, Michael Coxon and Adam Beashel.

Adam Beashel’s son Joel won the previous Flying 11 nationals with Marshall Day. He then sold the boat, Cheeky, and handed the baton to his former for’ardhand for this year’s regatta.

Marshall, 13, delivered on the big stage, now sailing with young Leo Pirret who progressed from Sabots. Joel attended the presentation last Sunday to award Marshall and Leo the trophy.

Marshall’s sister Keisha, 15, was also skipper in the top all-girl crew, finishing fourth overall with Amy Ellis. Marshall also collected the first-time skipper award and the junior skipper award, so the Day’s car was certainly full on their return trip to Lake Macquarie.

Manly’s Sam Stodart finished runner-up for a second year after being pipped on the last day as the wind faded. The breeze direction also changed from noreast to southeast, necessitating a full reset of the race course on Brisbane Water.

Belmont held the teams trophy but handed it back to Manly’s sailors, who showed great consistency at the pointy end of the fleet. Fortunes fluctuated during the week as conditions favoured the lighter crews. The heaviest breeze was 13 knots and there were frequent times when it fell below three knots.

The strongest squall of the event came during the presentation, when a storm cell brought lightning, hail and heavy rain. Market umbrellas began to rip as Marshall was mid-speech.

Fleet size (51) was slightly diminished, with only one Brisbane boat venturing south due to Covid uncertainty – otherwise, there would be up to a dozen. Two boats also withdrew during the regatta as a result of being close contacts.

The young sailors all enjoy the F11’s performance and competitiveness. As Ellen Murray from Helter Skelter commented: “You have to think a lot more. Single-handed boats are pretty easy but when you get to Flying 11s there’s more to consider.”.

“For us, the Flying 11 has been a really good class to develop their sailing. They can sail a two-person boat with their mates, and the boat teaches them good techniques, good boat handling and they go fast,” he said.

“It has put them in a really good position to move on to whatever’s next for them, be that an Olympic pathway in the 49er or 470, or into the skiff classes. It’s a very equal class. We’ve had all-female national champions and a lot of mixed crews. It tolerates quite a high weight range and everyone has a lot of fun.”

For the full results, see: http://www.sailingresults.com.au/ScoreItV2/Public/Templates/F11-Fleet/index.php?event_id=1111