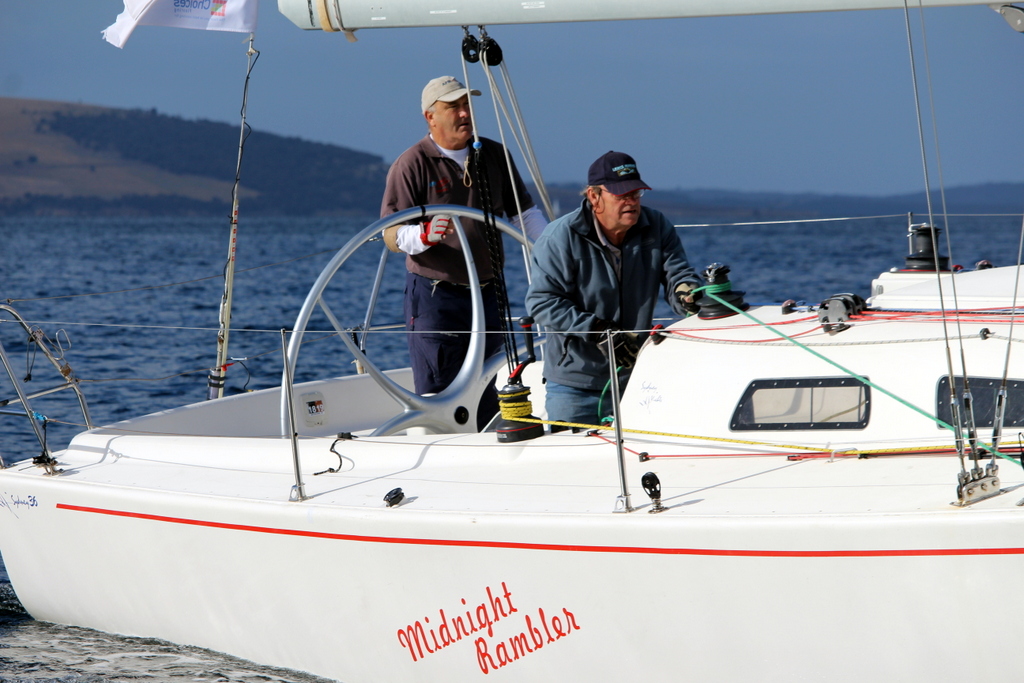 On Sunday, Psaltis, now re-located to Tasmania, skippered his current yacht, a Sydney 36 also called Midnight Rambler, to his first win as a ‘local’ in Division 3 (non-spinnaker, two-handed) of Derwent Sailing Squadron’s Autumn Short-Handed Series. The wind barely got above 8 knots on a flat River Derwent.

The glorious autumnal sailing weather drew 35 of the 40 entered yachts out on the Derwent. Returning to race for the first time this year as Mike and Michelle Denney’s Wild West.

Halfway through the morning race the predicted, slightly fresher southerly blew up the Derwent, allowing some back-marker boats to make up a few places.

In Division 2 (spinnaker, two-handed) John Wearne took over the helm to steer the Fred Barrett-designed Fang to the Max to its second win of the series with Lucy Rees as crew. Trouble (Dave Willans and Mark Millhouse) placed second, Jiyuu (Peter and Karen Davis) third.

Another husband and wife team, Steve and Trina Davidson, sailed Dynamo to the closest victory of the day, beating father-and-son crew, Angus and Fynn Sprott in Sea Temple, by just three seconds on corrected time in Division 4 (non-spinnaker, two-handed).

In another duel on the Derwent, DSS team of Colleen Darcy and Scott Brain in the SB20, Brainwave crossed the line 13 seconds ahead of Mind Games (Phil Reid) from the RYCT in Division 5 (spinnaker, two-handed).