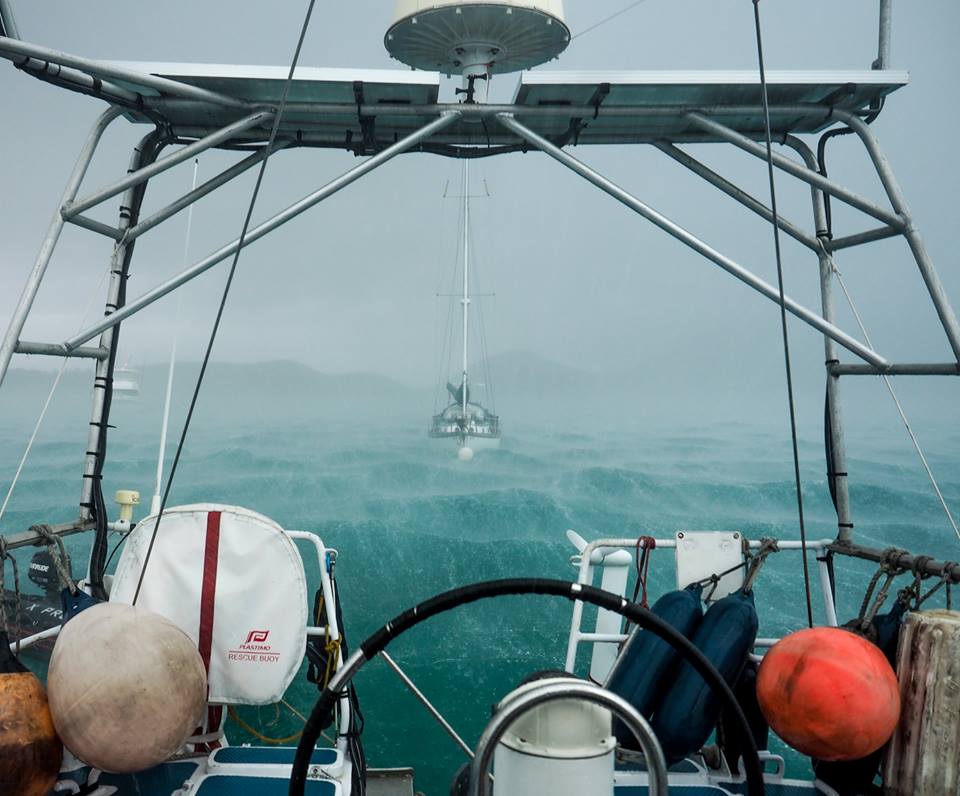 Five years ago we were at a remote Pacific island with just a few other yachts. There was socialising ashore and chatter on the VHF. This year we sailed to another remote island: Lord Howe.

It was an easy 470 nautical mile sail from Fraser Island, Australia, with a northerly breeze behind us. The random element was the current of up to two knots that sometimes helped and sometimes hindered. We had downloaded the most recent water temperature chart with the idea of staying in the warm water of the East Australian Current that flows south from the Great Barrier Reef. Unfortunately navigation by thermometer is yet to be perfected on this boat.

As we got closer to Lord Howe, the wind changed from the north to the south and a small swell developed. We were glad to get into the lee of the island. The waves got flatter but the hills got higher.

Lord Howe is an exposed seamount, a seven million year old volcanic remnant sitting on top of the Lord Howe Island Rise, an elevated area of seafloor stretching from New Caledonia to New Zealand. Mount Gower, 874 metres and Mount Lidgbird, 776m, are the highest peaks on the island and are an imposing sight from at sea.

A few miles out we radioed the Lord Howe Island Police who are also the Port Operations Manager (POM). You cannot enter or exit the lagoon without approval from the POM.

Simon the friendly and efficient police officer monitors VHF channels 16 and 12, the designated port operations calling channel, 24 hours a day, seven days a week. We were asked to keep our radio on channel 12 during our stay on the island. The working channel is 14.

Simon told us to go to the Southwest Roadstead and await further directions. Soon he radioed and asked if we could see his police cruiser with flashing red and blue lights parked on the hill. This was our reference point as he guided us into Man-of-War Passage.

To protect the coral, boats are not allowed to anchor in the Lord Howe lagoon. Prior to leaving Fraser Island we had completed a form ‘Application to attach a vessel to a public temporary mooring in the lagoon’ and emailed it to the Lord Howe Island Board.

Vessels are assigned a mooring based on the length, draft and tonnage. There are three mooring fields in the lagoon; Man-of-War Passage is the deep water field suitable for vessels drawing up to five metres but completely open to the southwest.

Because of a mix up in the bookings we had to spend one very rolly night here. The next day, aware of the dire weather forecast, we were glad to move onto our allocated mooring in the North Passage. There are five moorings here and the depths range from 2.5m to 1m. Our draft is 1.5 metres and we were assigned the 1.8m mooring for our ten-day stay.

Simon asked us to confirm that we had attached to the mooring using two lines. He told us that we could shackle our chain to the spiderweb ground chain. We put on our snorkelling gear and jumped in the water. We checked the mooring then swam to the reef. The mix of water from the warm East Australian Current and the cool-temperate ocean currents, creates a near pristine marine environment with a variety of temperate, subtropical and tropical species.

There are many snorkelling sites in the lagoon including some old shipwrecks. On the eastern side a popular location is Ned’s Beach where you can feed the fish.

After our snorkel we went ashore. Situated at latitude 31.3°S, Lord Howe Island has a humid subtropical climate. Average maximum temperatures in the summer range from 24°C to 27°C.

There are no snakes or venomous stinging insects, the endemic woodhen reminded us of the weka and the flora is more closely related to New Zealand than to Australia. Over several days we walked most of the tracks on the 10 kilometre long island and it felt a lot like home.

We visited the Island Board office and got a key for the free toilets, showers and washing machine on the wharf.

When we returned to the boat, the mooring beside us had been taken by a yacht that was sailing from New Caledonia to Australia. Although not an official port of clearance as there is no quarantine, boats are allowed to stop for three days on their way to or from an Australian mainland port. As it turned out this yacht stayed seven days.

The next day the Island Trader, the fortnightly supply ship, arrived and tied up at the wharf. We went ashore and walked over Transit Hill and Intermediate Hill before scrambling up to the Goat House Cave high on the side of Mount Lidgbird.

There were stunning views north across the island and the lagoon and south to Ball’s Pyramid, the tallest sea stack in the world. We returned via Mutton Bird Point Lookout.

Finally the Australia Bureau of Meteorology (BOM) recognised what Windy.com had forecast. BOM issued a severe weather warning. A strong cold front was approaching from the west bringing showers and thunderstorms. The wind was forecast at 30 knots from the nor-norwest ahead of a squally southwest change. Hazardous surf conditions were predicted.

We hoisted the outboard and the dinghy aboard and put an extra rope over the dinghy. We put a tie around the furling jib and another around the sail cover. The tiller was double lashed and the swim ladder was put away.

Down below we went into sailing mode. The locker tabs were down, drawers were bolted and the brackets were on the bookshelves.

Meanwhile on the VHF radio, Simon was contacting the yachts in the Man-of-War mooring field. In a southwesterly wind, conditions would be horrendous and there would be no escape, the pass would close out. He suggested that they go to anchorage LH4 on the eastern side of the island.

It was advice not to be ignored. It was now after 5:00pm, the clouds were thickening and the light was dropping. There was little time to get around the island and anchor before dark. The yachts in Man-of-War passage scarpered.

That night the wind bulleted off the northern cliffs. We were laid over in the gusts. Thunder and lightning battled overhead. We thought of the yachts anchored on the eastern side on a lee shore. It would have been a nightmare.

We listened to the VHF and followed their conversations. One was a Sydney to Hobart race boat and was carrying minimum ground tackle. Several times it dragged anchor.

Later, when the wind changed direction, they could not get the anchor up. They came dangerously close to the rocks. Another boat lent them a spare anchor. Then that boat dragged, but this time it was towards the open sea.

By daylight the swell had increased to six metres and a massive surf pounded over the reef, pouring into the lagoon and rushing out the pass. During the day the south-westerly intensified.

We lay in the current, sideways to the wind, heeled over at 15 degrees. The waves smashed against our hull like a wrecking ball. The boat was covered in salt.

Out to sea the world was an ominous grey and, in the lagoon, whitecaps raced across the water. We were boat-bound. It was an opportunity to do some jobs, but going up the mast would have to wait.

Five years ago we had also been boat-bound. After two days a French man called us on the radio. We switched to a working channel: “I am sick of zis bloddy wezzer,” he said. He asked if we had the forecast. We did not, but we knew Isaac would. “Bon Accord, are you listening?” Off course he was. Everyone was. Isaac transmitted the forecast to all the boats in
the anchorage.

By the second day of the gale at Lord Howe, we also were sick of the weather. However there were plenty of distractions on the VHF. Further down the lagoon in the Erscotts mooring field a Sydney yacht made a general call to all boats in the lagoon: “we are eating a delicious pear crumble for morning tea. Anyone is welcome to join us. Please bring some cream.”

It is illegal to transmit fraudulent or deceptive messages. I hoped the pear crumble was up to par.

Then on the third night the race boat in the eastern anchorage activated their EPIRB. We had been able to ‘see’ them and two tugs on the AIS. We watched the AIS and listened to the radio. Search and Rescue had received an emergency signal. They contacted Simon who radioed the race boat. The skipper was embarrassed, a crewmember had hung a wet jacket on the EPIRB, which had activated it.

On the fourth day we were finally able to launch the dinghy and go ashore. We walked to the other side and looked down from the cliffs at the anchored yachts. A huge ocean swell was rolling in. The yachts were just outside the surf line and as each wave rose up under their hulls it looked like they were about to take off down the face of the wave. It was a precarious situation.

On the fifth day the Island Trader left. We watched them punch out through the surf covering the pass. It would still be a few days until our small yacht could get out.

We walked, we snorkelled, we enjoyed this amazing island. Then the other boats started leaving for Fiji, Brisbane, Sydney and Tasmania. We were the only yacht left.

The radio was quiet. We climbed the mast, straightened the Windex and sailed off to Eden. ≈