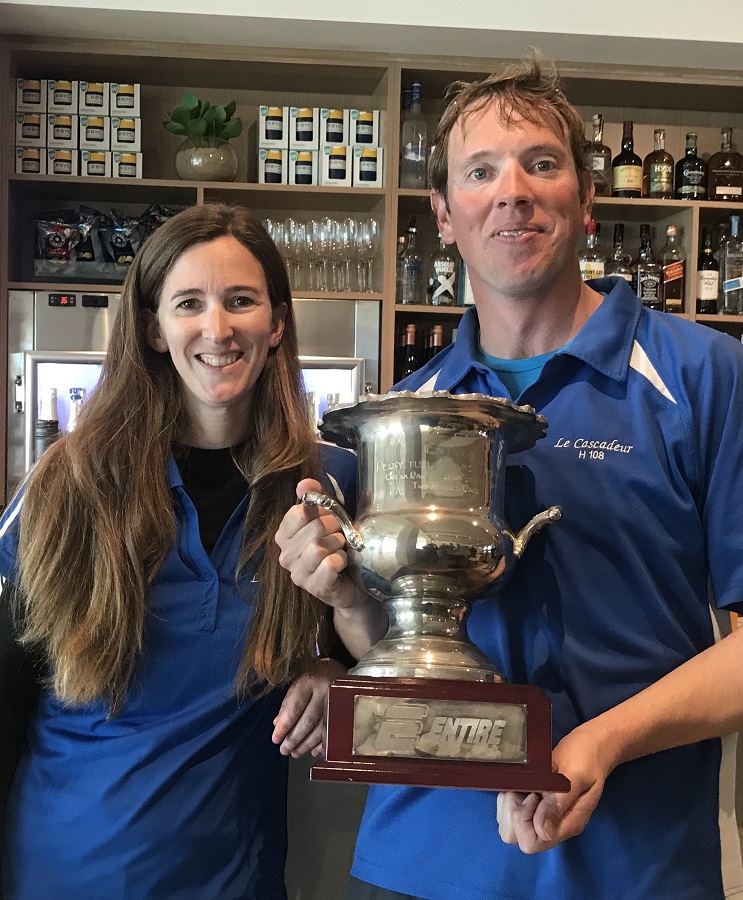 William Sheers and Dan Rushbrook have sailed Executive Decision to a decisive IRC win in the Ocean Racing Club of Victoria’s Double-Handed Yacht Race held on Port Phillip in Melbourne on the weekend.

Sheers was thrilled with their win for two good reasons: “The day before we did the Hobsons Bay Yacht Club (HBYC) Brass Monkeys (yes, it’s cold in Melbourne this time of year) Series race and had rigging damage; we broke one of the lowers. It’s a shame, we had a good lead. I was up till sunset with my crew fixing the mast to actually make it to the ORCV’s Double-Handed race,” he said.

“The weather we got was pretty unexpected too. It was forecast to be very light, which it was at the start of the race, but big black clouds brought lots of wind. It got up to 18 to 19 knots. Our tactics were to head towards the black clouds to find the wind.” It worked.

“We had great start and got good lead on the bigger boats behind us. The conditions were challenging, with big shifts, but Monica (Jones) on Salamander III kept us on our toes. They (Jones and David Richards), sailed well and we just managed to beat them on IRC,” Sheers said of the pair who finished second overall.

“All of those boats, except mine, were mixed female/male teams,” Sheers pointed out.

Blackstock and Eeckman also sailed their Southern Ocean 31, Le Cascadeur, to overall wins under AMS and PHS, so were jointly awarded ‘Boat of the Day’ with Executive Decision.

The day, by all accounts, was a spectacular one. Royal Brighton Yacht Club (RBYC) hosted the event, also providing the media boat, start and finish functions and held the prize giving. Race Director, Robin Hewitt and his team, set the course to start in front of the club, the course stretching between Sandringham Yacht Club (SYC) and Royal Melbourne Yacht Squadron.

“We had a full range of boats from Melbourne-Osaka double handed racers to club racers and local sports boats, ranging in length from 30ft’ to 67ft, along with mixed crews from the old and wise to the young and fit; a good representation of demographics,” competitor and ORCV Committee Member, Tim Boucaut said.

It was a bay course, set for a southerly; short legs, but a long course and a testing one. Sixteen nautical miles, shortened to two laps from three as officials expected the forecast light airs at the start to stay that way.”

The fleet hoisted a variety of masthead and asymmetrical kites or poled out headsails for the downwind runs, making spectacular viewing for those watching on the water and from land, as the competing boats were only a mile off the beach.

“We got a lot of comments on social media from people watching saying it was a wonderful sight, seeing the boats race sail close to Brighton and Sandringham,” Boucaut said.

“What made it more special was a pod of dolphins following us – it was one of those days – and even the sun came out for the last two thirds of the race. We had everything in our favour, including good support within the teams and good competition between the clubs.

“ORCV recognises the popularity and will continue to lead the way promoting and supporting short-handed sailing events. The ORCV four + auto helm category has been well supported. We support short-handed racing in every ORCV race and we will be looking at other innovative events for 2020; stay tuned,” Boucaut ended.

The Joint Venture between ORCV (Race Management), Sandringham Yacht Club (Melbourne Host) and Osaka Hokko Yacht Club (Osaka host) which started from the 2013 Melbourne Osaka double handed yacht race and continued for the 2018 race, has seen increased participation. The club has already received over 50 Expressions of Interest for the 2023 Melbourne to Osaka race.

ORCV’s next event is the Apollo Bay Race, starting on Saturday May 18 from Queenscliff at 7am, with 28 entries already received, including one multihull.