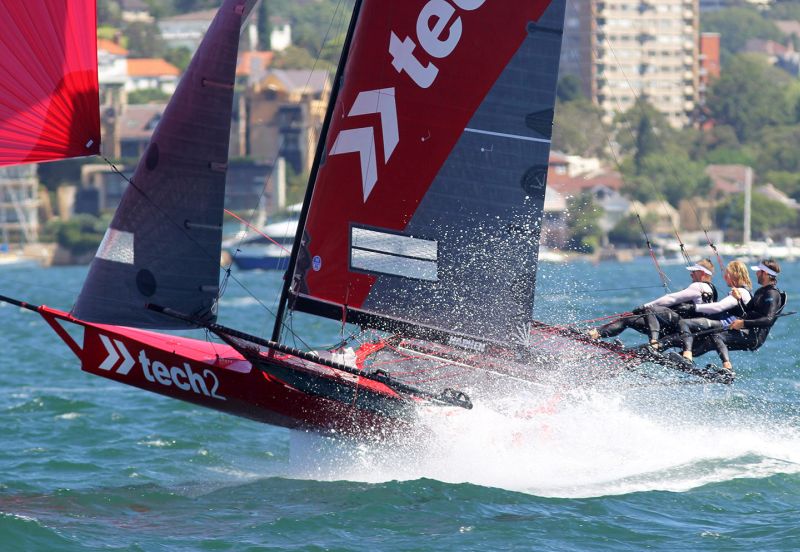 07/12/2020
In contrast to the 40-knot winds that battered Sydney Harbour last Sunday and forced the Australian 18 Footers League to abandon Race 2 of the NSW 18ft Skiff Championship, today's 20-knot westerly wind produced one of the most spectacular 18ft Skiff races seen on the harbour for many years.
The race had everything.  Absolutely sensational spinnaker action as the fleet raced from Kurraba Point in the west to Rose Bay in the east, close 'match' racing throughout the fleet on the three long upwind legs, lead changes, and all surpassed by one of the best comeback victories in a nail-biting finish.
For the record, the current Australian champion tech2 team of Jack Macartney, Charlie Wyatt and Lewis Brake won the race by 26s from the defending champion Winning Group team of John Winning Jr., Seve Jarvin and Sam Newton.
The Andoo team of Marcus Ashley-Jones, Cam Gundy and Rhys Mara, was with the leading group throughout the entire race and thoroughly deserved the third place, just 13s behind Winning Group, ahead of Smeg (Michael Coxon), Appliancesonline.com.au (Brett Van Munster) and Noakesailing (Sean Langman).
After the race, many spectators were left wondering how tech2 scored her incredible win.
From the start, the interest was centred on the two leading teams tech2 and Winning Group and the fans weren't disappointed as the two champion teams raced around the first lap of the course with only 12s between themselves.
The two teams elected to sail entirely different courses for most of the beat to the first windward mark but when the pair reached the Kurraba Point buoy they were separated by just 12s.
The Kitchen Maker-Caesarstone (Jordan Girdis) was in third place followed by Yandoo (John Winning), Noakesailing, Smeg and Appliancesonline.
Following a long spinnaker run back to Rose Bay, Winning Group continued to hold a slender lead, which was 12s ahead of tech2.  Both boats had recorded exactly the same time for the action-packed run.
Smeg carried a brilliant wind to the wing mark on the run and moved from sixth place to third, ahead of Andoo. Noakesailing, Yandoo and The Kitchen Maker-Caesarstone.
tech2 was just a little better placed as the fleet settled down for the second windward leg and narrowly crossed Winning Group.
Spectators were settling in for a great 'match race' situation when the race was turned on its head as tech2 got caught in a 40-degree windshist and 'capsized' off Bradleys Head.
For the next 10-15 minutes, the tech2 team struggled to get back up to speed and lost three placings before the fleet reached Kurraba Point mark for the second time.  At that point tech2 was now more than one minute behind Winning Group, Smeg and Andoo.
It appeared that tech2's day was over but nothing could have prepared the spectators for the boat's all-round speed over the next two legs of the course back to Kurraba Point.
tech2 was narrowly ahead of Winning Group and Andoo as the trio headed off on a 'tight' spinnaker run to the finish line off Clark Island.
The wind direction forced all three teams to lower their spinnakers to cross the finish line and it wasn't until 50 metres from the finish line that the winner finally became obvious.
It was a magnificent day of action-packed speed racing that thrilled all those who were lucky enough to watch it “right in front of them”.
Race 4 of the NSW Championship will be conducted next Sunday, December 13.
Spectators can follow the racing on board the club's spectator ferry, however due to the COVID-19 policy, numbers are limited. Booking online through the club's website www.18footers.com is essential. https://www.18footers.com.au/18-footers-sailing/spectator-ferry/
For those unable to make it out onto the water, AeroMedia Live Broadcast team will be on Sydney Harbour to capture all the action.  Live streaming is available at www.18footers.com by clicking on the '18 Footers TV' link.
– Frank Quealey, Australian 18 Footers League