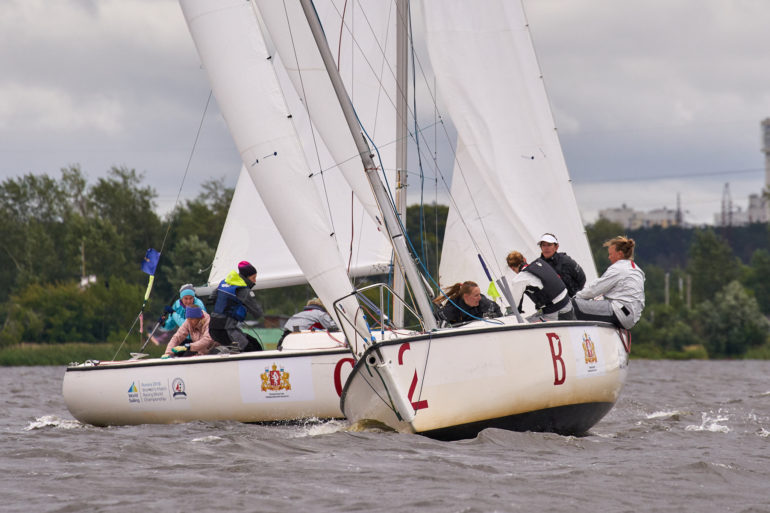 The semi-finals are underway - WMRWC pic-

Ekaterinburg’s famous Verkh-Isetsky pond keeps presenting the sailors with great challenges and the penultimate day of the 2018 Women’s Match Racing World Championship saw the trend continue as the field was reduced to four teams in a strong north-westerly wind.

Defending World Champion Lucy Macgregor’s Team Mac from Great Britain had the night to decide their opponent in the Quarter Finals.

“It wasn’t an easy decision at all. All of the teams have been sailing well and the teams who sailed the Repechage yesterday had more practice in the boats and looked to be sailing well,” Macgregor said.

And with that thought they went with the ‘safe’ pick of the team that finished in the last qualifying spot of the Repechage round, the Finnish L2 Match Racing Team skippered by Marinella Laaksonen.

Although Team Mac defeated L2 Match Racing Team 3 – 0, the races were close and, “It was really quite tough because the wind is very hard to read with the cloud cover, so you had to cover and sometimes you would lose on the shifts” explained Macgregor.

“Fortunately we were often able to extend before the windward mark which made the runs a little easier.”

Alexa Bezel’s Swiss Women’s Match Racing Team had a lively match with Russian skipper Ekaterina Kochkina’s ProKaTeam Sailing Team in their third match and received a double penalty at the leeward mark as they forced themselves inside at the mark when they had no rights.

“Ah, I should have listened to my crew as they said ‘go behind, don’t go in there,’” laughed Bezel when ashore after re-grouping and winning the next match to take the quarter final 3 – 1 and advance.

The Danish Team Kattnakken skippered by Trine Palludan found themselves up against the wall as the Russian BornToSail team skippered by Alexandra Martynova took an early 2 – 0 lead in their quarter finals. But the experienced Danish team fought back. “We focused on sailing our boat well and tacking a lot!” Palludan revealed.

“It was difficult to see the wind on the water, so we forced them to tack a lot and we covered them.” The strategy proved successful as they came from a 2 -0 deficit to win 3 – 2 and move on to the next stage.

Team Mac again had the choice of opponents and chose the Swiss Women’s Match Racing Team as their semifinal opponent leaving Match in Pink by Normandy Elite Team to face Team Kattnakken.

Each of the Semi Final matches went 2 – 0 before the racing was called for the day with the British and French in command of the matches.

The event will conclude on Saturday with the remainder of the Semi Finals followed by the Petit Finals and Finals before the Closing Ceremonies at 17:00 at Gubernskiy Yacht Club – Komatek.