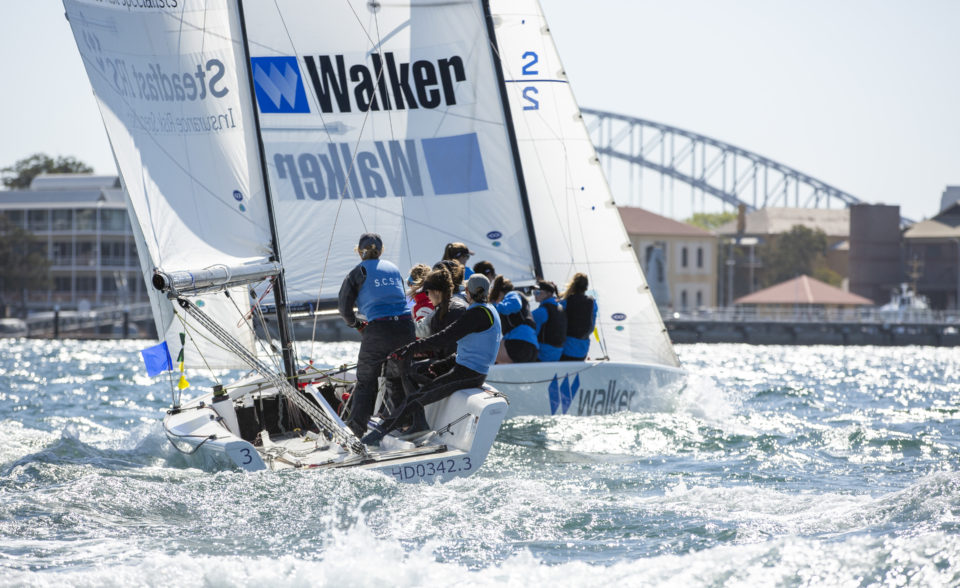 The top four teams have sailed through to the semi-finals at the 2018 Australian Women’s Match Racing Championship with Juliet Costanzo of Royal Prince Alfred Yacht Club (RPAYC) hanging on to her overnight lead.

However, her perfect scorecard didn’t stay intact as Royal New Zealand Yacht Squadron’s (RNZYS) Celia Willison almost stole the show on Day 2. Willison went undefeated to finish one point behind Costanzo at the end of the quadruple round robin qualifying stage.

Whilst Costanzo didn’t have a perfect day, her performance over the past two days has given her the ability to choose her opponent for tomorrow’s semi-finals clash. Costanzo choose the Cruising Yacht Club of Australia’s (CYCA) India Howard in the first to 2-point series. This will make for a very interesting semi-final series with Howard being one of only two people to take a race win from Costanzo in this competition.

This will leave RNZYS’s Celia Willison to race third place qualifier – Charlotte Griffin and her Royal Sydney Yacht Squadron (RSYS) team. Willison today made huge improvements both in her pre-start battles and tactics around the race course. This lead to Willison and her team qualifying in top spot at the end of Round Robin 3 and Round Robin 4 with perfect scorecards in each round. This means Willison will progress into her semi-final as favourite over this week’s highest ranked skipper, Charlotte Griffin.

Today’s conditions were almost a carbon copy of yesterdays with a beautifully stable north-easterly breeze allowing the Race Committee to position the race course in the vicinity of Rushcutters Bay. With the favourable conditions, ten flights were raced which completed the qualifying stage by mid-afternoon. As the qualifying rounds are now complete, Tanya Kelly and her team from Mooloolaba Yacht Club (MYC) will finish the competition in fifth place.

For Kelly, her team have shown vast improvements throughout the competition. This being only their second match racing regatta, the sole Queensland team claimed another race victory in the competition, this time from Charlotte Griffin.

“We have had a fantastic time down at the CYCA Youth Sailing Academy again this week. It’s been a great effort by the girls all this week and we have learnt a lot in the process,” commented Kelly after racing.

Tomorrow will see the semi-finals begin with racing taking place in the vicinity of Rushcutters Bay. Semi-finals will be starting at 1100hrs with Finals expected to start by 1300hrs.