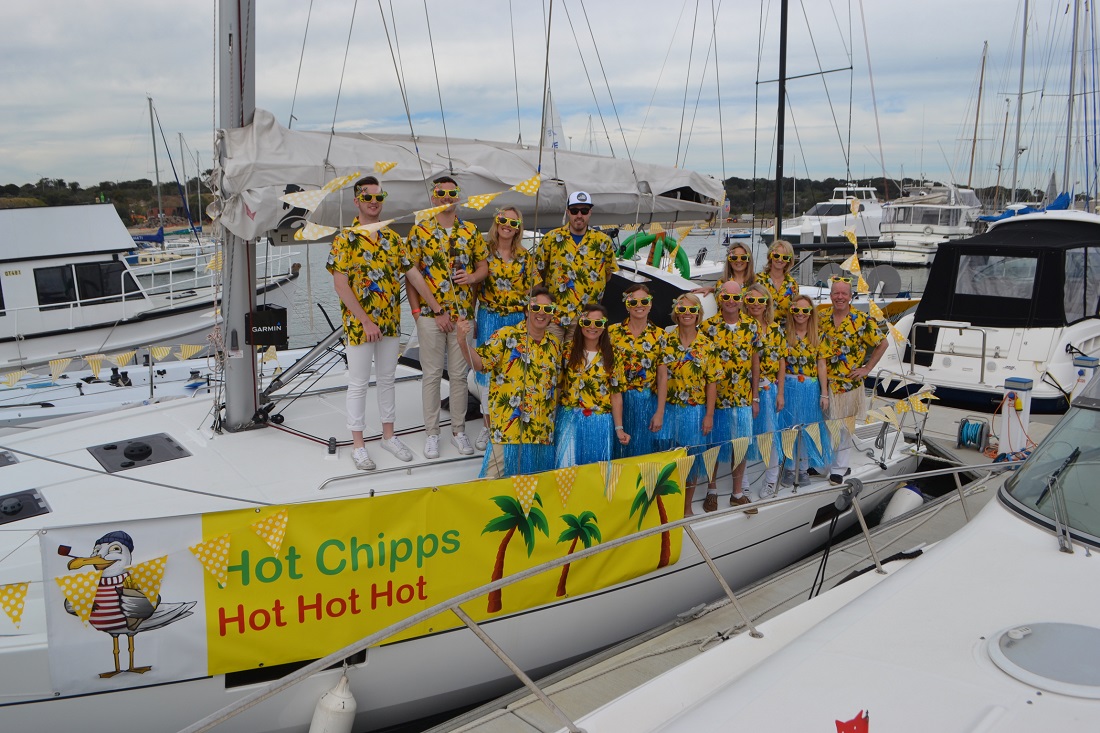 When Victorian John Chipp and his Beneteau Oceanis 411 crew arrive for their maiden SeaLink Magnetic Island Race Week at the end of August, they will be right at home with the other fun-loving entries that have come to define Townsville Yacht Club’s (TYC) annual regatta, to be held this year from 29 August to 4 September.

Chipp, from Sandringham Yacht Club, will arrive with “a mix of girls and guys, including my wife Christine, my son Patrick and our mascot Salty,” on the creatively named ‘Hot Chipps’. “Salty is an old seadog who has lost his way. Very sad,” Chipp says with merriment.

“This is our first time at the Island; I thought it was time to bring our boat up north and we’re very excited about the regatta. We’ve just sailed the boat up to Sydney; the seagull has landed,” he remarks, offering up sauce to go with the hot chips.

“Sydney is one of six legs. We want to enjoy it all,” explains Chipp, whose stopovers with five people per leg, are: Pittwater, Newcastle, Gold Coast, Gladstone, Airlie Beach and finally Magnetic Island. “It’s a two and a half month cruise.

“I was looking for something a bit more casual and relaxed. We heard about Magnetic Island and are really looking forward to it after an intense racing program beforehand. It will be a lovely to do and a lot of fun,” Chipp comments.

On a more serious note, Chipp is the son of prominent politician, Don Chipp AO (he passed away in 2006), who famously left the Liberal party after Malcolm Fraser became Prime Minister of Australia in 1975. Chipp senior helped create the Australian Democrats and became their inaugural leader in 1977, famously promising to “keep the bastards honest”.

Entries are on the rise for the 13th SeaLink Magnetic Island Race Week (SMIRW). Townsville Yacht Club organisers do not want to see anyone left disappointed, so urge prospective competitors to go online and enter now.

“We have over 40 entries already; over half of capacity berthing at the Island, Event Chairman and TYC Director, Mal Pirret, says of the 2019 event.

“As a bonus to entering now, competitors can also take advantage of the discounted accommodation from Peppers Resort and go into the draw to win the Peppers package for next year.”

To qualify, entries must be received and paid for by close of business on 31 May, to receive multiple entries into the draw. The prize is an Early Bird package of seven nights’ accommodation in a three bedroom apartment at the stunning Peppers Blue on Blue Resort (SMIRWs exclusive accommodation partner) andfree berthing for the event at Magnetic Island Marina, to be used in 2020.

Don’t let the recent floods in the region put you off either. Pirret explains: “Townsville is resilient. Work is being undertaken in those areas hit by floods. Magnetic Island has been essentially unaffected and we at Townsville Yacht Club can’t wait for SeaLink Magnetic Island Race Week to start.

“The Island is in great shape; and we are ready to go. The bays are as beautiful as ever, people are enjoying cruising here. It’s all as good as everyone remembers,” he ended.

The SeaLink Spinnaker class is leading the charge by a long way in terms of numbers, with 34 already entered;representing Queensland, Victoria and NSW. Entries in the other classes are travelling from as far away as Western Australia.

For some locals, there will be a competition within the competition. Vicki Hamilton, a TYC regular at the helm of her father Ian Hamilton’s Akarana, will keeping tabs on newcomer, Vaya Con Dios (translates to ‘go with God), recently purchased by Wayne Simonsen. Why? Because both are sailing same-design Farr 1104s.

The two skippers have already had a couple of side bets during the TYC racing season, so at Maggie Island, things will be no different:  “Akarana always plans to be competitive at Race Week, but we also like to make it fun for everyone,” Hamilton remarked. “Besides, what’s a magnum of champagne between friends?”

Prospective entrants can choose from the IRC Racing, SeaLink Spinnaker, SeaLink Non-Spinnaker, Multihull and Trailable Yacht classes. And as those who have been before will tell you, you don’t want to miss this special event. Enter now and don’t forget to book for the Cape Upstart barbecue preceding the main event: www.magneticislandraceweek.com.au.

Peppers Blue on Blue Resort is offering an Early Bird special of 10 percent discount on their Peppers Bed and Breakfast rate (with various accommodation options available), including one welcome beverage per person. Secure the special rate by booking directly through the resort before 30 June 2019. Phone: (07) 4758 2400 or email blueonblue@peppers.com.au