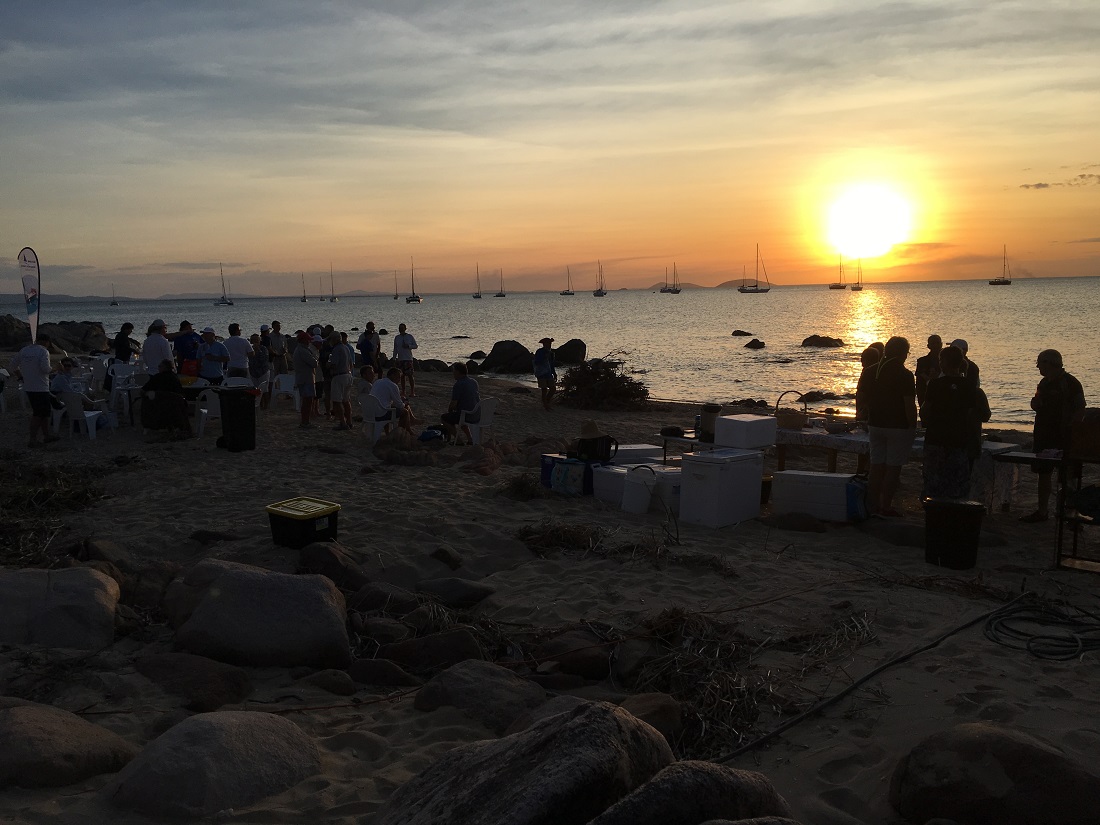 It started nearly four years ago pre-SeaLink Magnetic Island Race Week (SMIRW), and it's quickly becoming an institution with competitors, whose first questions to Townsville Yacht Club (TYC) organisers include, “Is Cape Upstart on again?”

Blame it all on a past competitor, Jason Antill. “He infected me with a great idea,” says Mike Steel, the former SMIRW Event Chairman and competitor from TYC.

The idea was that sailors heading north for the last of the northern circuit regattas could get together in a relaxed fashion; catch up with friends and meet new people before the main event. This year, it will be held on Tuesday 27 August, two days before racing starts, giving entrants a day to recover!

Named by Lieutenant James Cook, on 5 June 1770 during his voyage along the eastern coast of Australia on the HM Bark Endeavour, competitors love Cape Upstart, not to mention the barbecue with fellow competitors. Accessible by water only, yachties can row ashore or be ferried by Townsville Yacht Club officials.

Richard and Karen Bonato are the hosts at Cape Upstart, a national park in the locality of Guthalungra in the Whistundays where the Juru Clan of the Birri-Gubba Tribal Group lived for thousands of years.

For the last three years, just before SMIRW, the Bonatos have opened their home to welcome yachties, thrilled to share this piece of paradise.

“We know Mike (Steel) and he asked us what we thought about having a barbie for the yachties. We don’t get to see him much, so we thought it was probably not a bad idea. It’s a rare chance to see him,” says Richard Bonato laughing.

“Really, we enjoy doing it. We get to meet people we’d never usually meet. The yachties seem very appreciative too. It’s a great gathering of people who enjoy to sit around and have a feed and talk. There’s a lot of interaction. We welcome anyone who wants, to come to the house for a shower while they’re there too, as not everyone has a shower on their boat.

“It’s our holiday house, where we go fishing, swim and go on the boat. It’s a great place for kids. Our kids grew up holidaying there and now our grand kids enjoy it,” he ends.

All supplies have to be brought over from the mainland, so while the Bonatos provide the venue, Marty Phillips supplies fresh as fresh Barramundi for the barbecue via Infinity Blue Barramundi in Northern Queensland.

“Fish don’t get blown over by cyclones,” Phillips says of his change years ago from land farming to the Barramundi farm.

“To be a farmer in this part of the world you have to be an environmentalist. We’ve got pristine areas on either side of us; the Great Barrier Reef and the World Heritage rainforest, so we have to do the right thing.” See more at: http://infinitybluebarramundi.com.au/

Grown in salt water, Phillips says, “In the past I’ve donated around 20 kilos of Barramundi each year for the barbecue. My business has merged now, so I will supply fish at cost this year. I package it up fresh, get it to Townsville and they pick up,” he says of the sustainably produced fish.

The Northern Queensland fish farmer admits, “I’ve never been to the Cape Upstart stopover barbecue, but I’d love to one year, because I hear it’s such a raging success and I’d like to be part of it. I’m still waiting for Mike to invite me…”

Mark Chew, a past competitor from Victoria, endorses this popular event. “It is a wonderful night with a big fire on the beach and a good way to socialise with fellow sailors before the event. It is a really beautiful gesture,” he says of the memorable evening that combines convivial company, a seafood BBQ and a few drinks set in one of Queensland natural beauty spots.

SeaLink Magnetic Island Race Week will be held from 29 August to 4 September and only a handful of berths remain. If you plan to enter, do it right now. Choose from IRC Racing, Spinnaker, Non-Spinnaker, Multihull and Trailable Yacht classes. And don’t forget to book for the Cape Upstart barbecue when you enter: www.magneticislandraceweek.com.au/