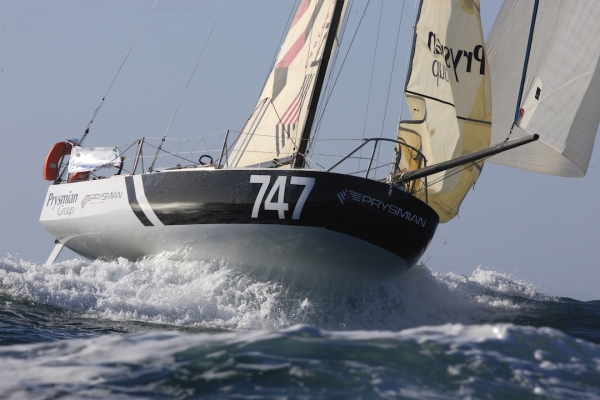 When the Mini Transat sent out a media release about some new designs for this year's race, we looked at the ugly scow bow in the picture and asked “why?”. Fortunatey, our readers include designers and naval architects, some of whom replied.

The short answer is more righting moment, both across the boat and longitudinally. For a given overall beam and keel weight, a scow bow gives more volume away from the centreline as well as more volume ahead of the centre of gravity.

Instead of only having outboard volume from the middle of the boat to the transom as on a pointy boat, with a scow you have it all the way along. This means that the centre of buoyancy moves outboard further when you heel, giving a higher metacentre, or more leverage for the keel and boat mass to exert righting moment.

If sail area is unrestricted, more righting moment means you can carry more sail for a given windspeed. Similarly, downwind you can press harder without burying the nose.

The above only considers hydrostatics. When you look at the dynamic situation, the scow also gives more planing area. But this is secondary since ordinary Minis had no problem planing. Maybe a scow can plane a bit sooner.

Another secondary advantage is that you have more volume for water ballast.

I am not up to speed with the Mini rules, but if they have a static heel limit with ballast loaded, then a scow will get more righting moment from a similar water ballast arrangement to a conventional peer.

The clever thing about a scow is that it obtains the extra righting moment without big changes in trim with heel. You don't get the tendency that wedge-shaped boats have to trim bow-down when heeled. Though recent progress in chined hull design has helped deal pretty effectively with the warping of the waterplane with heel, scows don't have to deal with it at all.

Which brings us to the downsides. The single biggest handicap is additional wetted area when upright. Once powered up the waterline gets narrower, but at zero heel you have a canoe body with disproportionately wide and shallow sections.

A conventional boat can shift weight forward to unstick the transom. A scow is harder to trim and does not have the narrow forward sections of a conventional hull.

Also the blunt bow does give more resistance in some wave conditions and more windage when sailing upwind. Some consideration must also be given to the fact that the keel root is very close to the surface when heeled. Finally, a scow hull uses more material than a conventional one so it will be stiffer but heavier.

In the end the outcome is in great part rule-dependent. The Mini is a short light boat with unrestricted sail area, so adding righting moment usually pays because it allows you to carry more canvas. Some of the extra sail area offsets any drag penalty paid for the extra righting moment. The rest is a net gain.

Another consideration is that with good weather routing, most time on the course can be spent sailing downwind in breeze where the drawbacks of the scow are smaller.

You might be interested to know that RC 10 Raters went through a scow 'trend' in (I think) the 1970s. Possibly around the time the Moths did. http://www.radiosailing.org.au/our past/Frank Russell.pdf. Notably the 10 Rater rule allows you to trade waterline length for sail area.

Naval architect Andy Warner also sent us a succinct explanation of the positives for a scow bow:

With a displacement hull the angle that the water is parted with at the bow is an important contributor to resistance of the form along with Displacement, Length, Prismatic Coefficient, position of the Centre of Buoyancy. The bigger the angle the more resistance.

If the hull is not operating at displacement speeds but rather is planing the resistance of the form is governed by a different set of factors. Particularly Length and bow angle are much less of a contributor and beam plays a bigger role. Look at a picture of a powerboat on a plane with the narrower bow lifted clear of the water and a much blunter part just throwing water out to the side.

The boat you have a picture of for the mini transat clearly expects to be planing most of the time.

Likewise if the Sydney Hobart was a race with boats planing from start to finish Comanche would have won but when the wind went a bit lighter or on the nose the narrower Wild Oats had the advantage. Every boat design is a compromise and a balancing act. Extreme boats will always win if they get the right weather

And Hugh Spencer contributed these thoughts:

Its simple really. I used to race a Fireball but one very memorable race was a private race from Rye to Portsea against a Mosquito sailed by our friends one blowy day. With the kite up we won and did so convincingly. But why?
One of reasons is the Fireball's scow configuration means she lifts up on the bow wave and planes earlier and faster. Scows are inherently much faster reaching and running. The old displacement rule of waterline length determining speed doesn't apply to a planing yacht.
Sailing to windward requires much greater longitudinal grip on the water and unless planing, waterline length and the ability to cut through the water is more likely to apply. Sea state is also a critical factor. True Scows also tend to have flat bottoms which aid planing because there is a greater proportional area to generate lift at specific angles of heel.
– Hugh Spencer