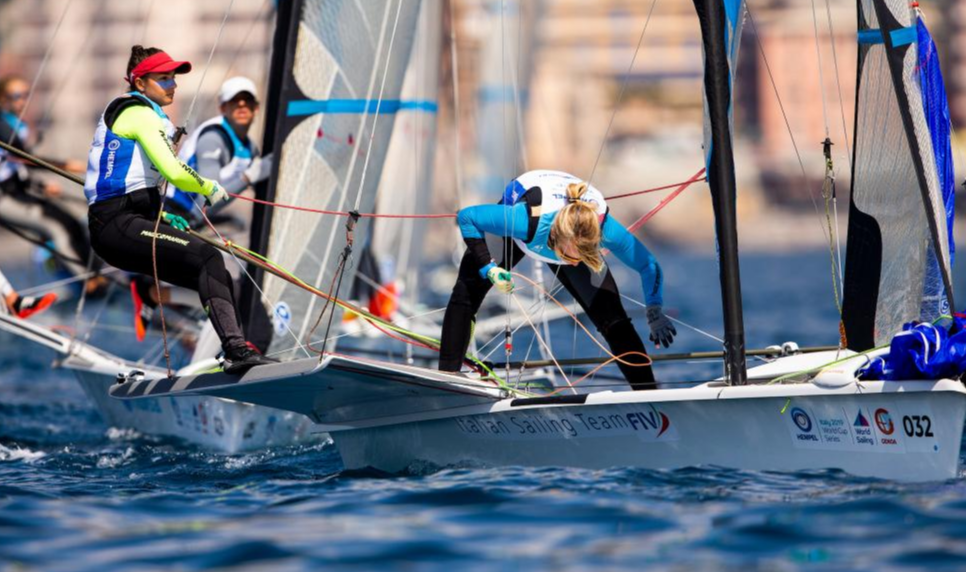 The scene has been set for the 49er, 49erFX and Nacra 17 Medal Races at Hempel World Cup Series Genoa following the conclusion of fleet racing in the Italian city.

On the fifth day of competition in Genoa, a long awaited 6-9 knot steady western breeze arrived, ensuring that 41 of 42 races were completed.

Italy’s Carlotta Omari and Matilda Distefano will lead the home nation’s hopes as they take a narrow advantage into the 49erFX Medal Race.

Australian brothers David and Lachy Gilmour have New Zealand’s hottest sailing properties, Peter Burling and Blair Tuke, hot on their heels in the 49er, while the advantage will be with Ben Saxton and Nicola Boniface (GBR) in the Nacra 17.

The Men’s and Women’s 470, Laser Radial and Finn completed three good races. The only dampener on the day was in the Laser fleet which could not complete a final blue fleet race.

Italy’s Omari and Distefano advanced into pole position in the 49erFX after finding near perfect form on the race track. From four gold fleet races the Italians secured a 3-2-1-2 scoreline.

Their consistent performance has given them a four point lead over Ida Marie Baad Nielsen and Marie Thusgaard Olsen (DEN) heading into Saturday’s Medal Race. Overnight leaders Odile van Aanholt and Marieke Jongens (NED) dropped to third, eight points off the leaders after a mixed day.

In the hunt for selection for Tokyo 2020 at the first of two Dutch qualification events, van Aanholt and Jongens are seven places clear of compatriots Annemiek Bekkering and Annette Duetz with just the Medal Race remaining.

Australia’s Gilmour brothers moved up to first overall after four gold fleet races in the 49er but the biggest movers were New Zealand Olympic champions and America’s Cup winners Burling and Tuke.

Burling and Tuke sailed their way to a 2-9-5-(22) scoreline which pushed them from 10th up into second and six points off the Australian leaders.

The points are tight across the board and as many as seven teams have a realistic chance of claiming a podium spot in Saturday’s Medal Race.

Four blue and four yellow fleet races brought fleet racing to a close in the Nacra 17 and Great Britain’s Saxton and Boniface will take a seven point lead into the Medal Race.

Saxton and Boniface picked up a (6)-1-4-3 in the yellow fleet and have some daylight over Iker Martinez and Olga Maslivets (ESP) who secured a (16)-1-3-6 in the blue fleet.

Thomas Zajac and Barbara Matz (AUT) sit third, three points off the Spaniards. Two Italian teams, Lorenzo Bressani and Cecilia Zorzi and 2018 World Champions Ruggero Tita and Caterina Banti are fourth and fifth. They are firmly in contention for a medal.

The Men’s and Women’s 470 came into Friday having only completed one race, the least out of all eight events. There was eagerness to race in every competitor who queued at the launching ramp at 09:00 for the 10:00 start.

Although there was a delay on the water, both the Men’s and Women’s 470 completed three races with contenders for the medals emerging.

Consistency was at a premium, but a win in the first race of the day followed by a sixth and a discarded 30th, leave Carl-Fredrik Fock and Marcus Dackhammar (SWE) at the top of the 44-boat fleet.

Dackhammar was surprised at taking the overall lead ashore after racing but his competitors also had mixed days with no one finding it easy. In terms of points accumulated, the 25 that Zangjun Xu and Chao Wang (CHN) gathered from a 12-12-1 scoreline was the highlight of the day.

“If you make one small mistake on the course, you would end up so far back,” commented Dackhammar. “A simple mistake such as not being as close to the line at the start, not pushing it that little bit extra at the start can make a difference.

“Today the wind came in from so many directions that you just have to trust your own sailing and believe in it.”

In light winds, the risk and reward ratio is slim and the Swedes benefited from that in their opening two races but not so much with their 30th. He concluded, “We’ve taken some risks but it is unavoidable sometimes. You can’t take too many though. It’s really tough out there because there are so many tight situations.”

The Brazilians (5)-3-1 has given them the lead. “First of all, the breeze came today so it was a good day for everyone,” exclaimed Oliveira. “But for us, it was a really amazing day, even though the conditions were very difficult and shifty.”

Di Salle and Dubbini are eight points off the Brazilians in third with Gil Cohen and Noa Lasry (ISR) separating both teams.

There is a three way tie for the lead in the Laser Radial between Dongshuang Zhang (CHN), Vasileia Karachaliou (GRE) and Anne-Marie Rindom (DEN).

The trio is locked on five points after three races in the blue and yellow fleets. Zhang controlled the blue fleet, securing two race wins and a third. Meanwhile Karachaliou was close behind Zhang in both of her wins and took the final bullet of the day.

In the yellow fleet, Rio 2016 bronze medallist Rindom took a race win, a second and a third, which she discards. The remaining yellow fleet victories went to Isabella Bertold (CAN) who is sixth and the eighth placed Manami Doi (JPN).

2017 and 2018 Laser World Champion Pavlos Kontides (CYP) is the model of consistency in the 111-boat Laser fleet. The Cypriot is the only competitor that does not hold a double digit score and it has resulted in him grabbing the lead.

The Laser pack completed their opening series on Friday and will advance to gold and silver fleet racing on Saturday before Sunday’s Medal Race.

Kontides will carry a four point advantage over Jonatan Vadnai (HUN) in the gold fleet. Hempel World Cup Series Miami gold medallist Hermann Tomasgaard (NOR) is third overall but there is minimal separation at the top of the pack and with three races to follow, anything can happen.

Alex Muscat (ESP) put a dent in Oskari Muhonen’s (FIN) lead in the 20-boat Finn fleet following a 1-2-3 scoreline. Muhonen scored a second, a third and a ninth, which he discards, as his advantage was trimmed down to just two points. Three fleet races remain in the Finn.

Medal Races are scheduled to start at 10:00 local time on Saturday 20 April for the 49er, 49erFX and Nacra 17. The remaining fleets will continue fleet racing ahead of their Medal Races on Sunday 21 April.

All Medal Races will be live on World Sailing’s YouTube Channel at: https://youtu.be/kyGGiRqiUdw.