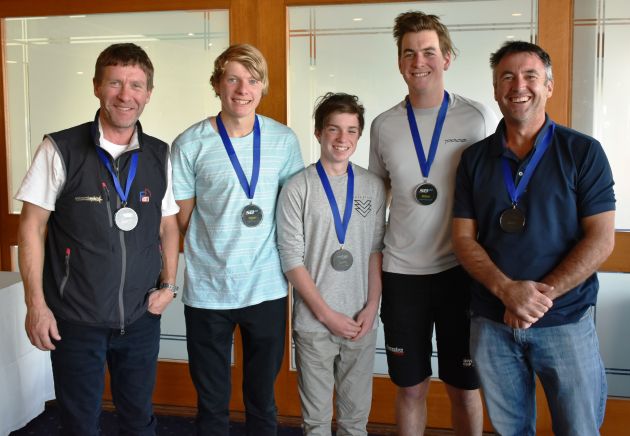 Burnell, with his sons Toby and Ollie and young Optimist sailor Bailey Fisher in the crew, yesterday won the mid-winters on a chilly River Derwent by a comfortable margin in Honey Badger.

Burnell will be one of six skippers from the Hobart SB20 fleet contesting the worlds at Cowes in August/September, helming a boat called Marvel owned by English sailor Richard Powell, with his brother Tim Burnell also in the crew.

The 2018 worlds will be sailed on the River Derwent, conducted jointly by the Royal Yacht Club of Tasmania and the Derwent Sailing Squadron, with a strong European contingent expected.

Catchpool, steering Hypertronics, won the final race yesterday for a net 19 points, also taking out the masters trophy, while Rogers climbed up from seventh at the end of day one to steer Karabos into third place on 20 points.

Allison and her crew of Jill Abel, Amelia Catt and Emma Cook, finished third in the final race for a net score of 34 points from a series of DNF-10-5-9-7-3.

In Germany, Tasmanian sailor Matt Bugg is leading the 2.4m class after day, despite a race one disqualification for an early start. The Rio Paralympic silver medallist then won the next two races.

Kiel Week is one of the biggest sailing regattas in Europe with 14 classes racing on the Baltic Sea. For Bugg and other disabled sailors in the 2.4m class, Kiel Week is a lead-up to the 2017 Para Worlds.