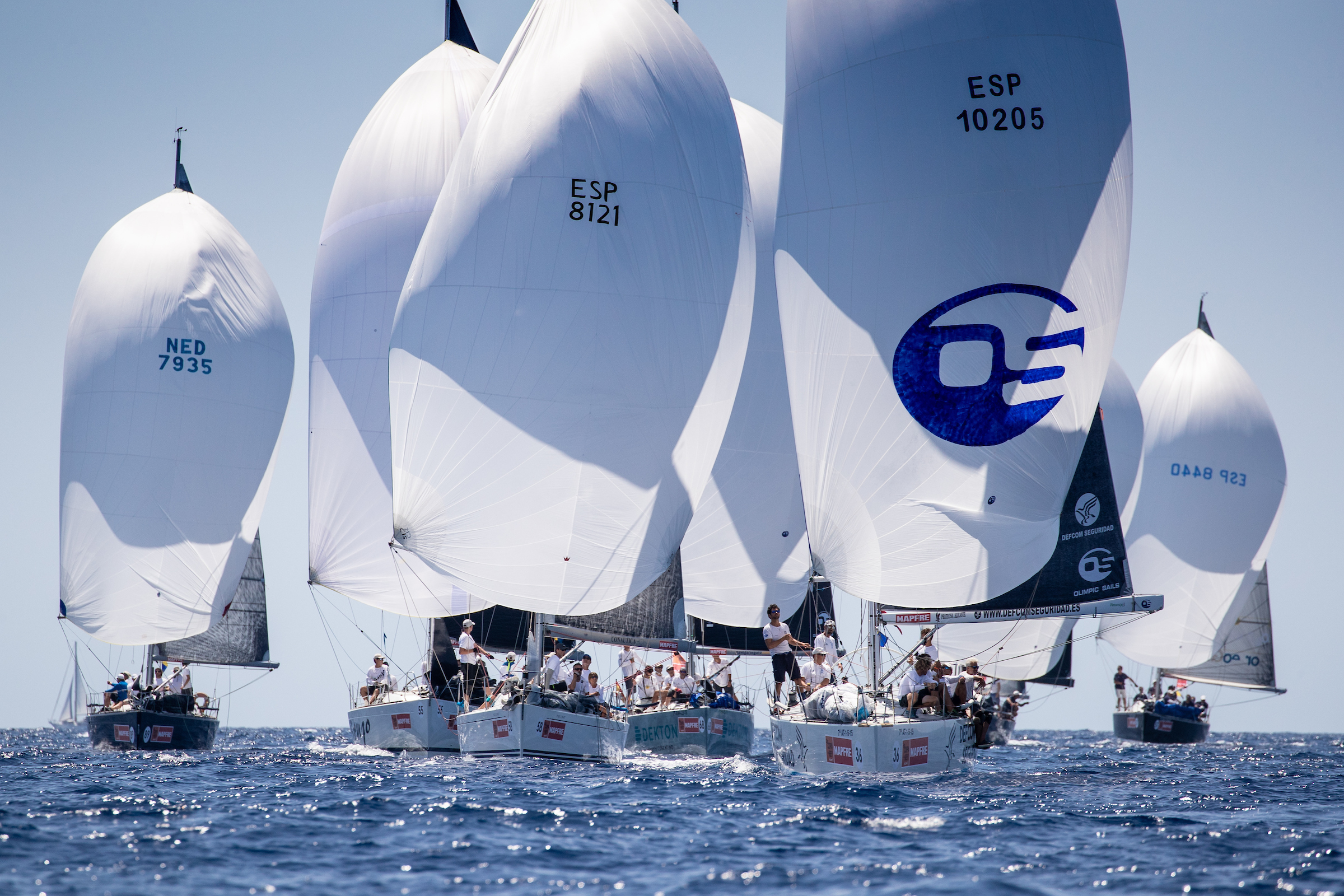 ORC 3 fleet on the Bay of Palma - Maria Muina pic

With Saturday’s one single race left to sail at the 38 Copa del Rey Mapfre most sailors at the Mediterranean showcase would agree that the new scoring format looks set to deliver a number of high tension showdowns in the key classes.

In the Mallorca Sotheby’s IRC class, the Maxi72s, the Copa del Rey class title is wide open. Hap Fauth’s US flagged Bella Mente team made sure they will be contenders tomorrow when they won the second of today’s sea-breeze windward leeward races. Dario Ferrari’s Cannonball team triumphed in the first race and lead into the last day by one single point, but they were slowed off the start line on the second race as the wind dropped away at the pin end and were forced to chase Belle Mente.

“They were lucky. The wind was on the pin and we were lined up and it went.” Grimaced Cannonball’s Italian navigator Bruno Zirilli.

Meantime Bella Mente’s tactician Terry Hutchinson relishes the prospect of a title shoot out against their Italian flagged rivals Cannonball, which has Ed Baird calling tactics along with Michele Ivaldi, both previous team-mates from his Quantum Racing days.

“It is all on tomorrow.” Hutchinson grinned, “I think if we win and Cannonball come second then we beat them on countback. We control our own destiny, right? If it was said at the start that that is what you had to do to win the regatta tomorrow, you would take it.”

Bella Mente last won at the Copa del Rey in 2016 when Proteus was second, Cannonball has not yet won overall at this event.

The Mallorca Sotheby’s IRC class is wide open too and promises an exciting finale after Jean Jacques Chaubard’s Team Vision Future got themselves back into contention with a second and first today while their French rivals on Paprec Recyclaje had a lacklustre first Finals day with a 5,7.

Howard Dyer’s Rowdy Too crew won the first race which they backed up with a third to lie second, two points behind Team Vision Future. Rowdy Too won here last year as Beau Geste before being purchased by Dyer who also owns the 100 year old Herreshoff designed classic NY40 Rowdy.

Team Vision Future have podiumed several times, most recently they were runners up to Alegre in 2017, but have yet to win the Copa del Rey title, their skipper-helm Mikael Mergui said, “ We are in the match. The points now are like double points so it is nice. If you have a boat which is away leading by a bit then you can still catch them, so we need to be really concentrated tomorrow.”

“Yesterday we made a few little mistakes and today we were good. We said today if we want to win we have to be a bit more focused.”

Recalling today’s races Mergui reported, “It was tight in the first race. We had a close battle with Rowdy Too, they are a bit faster downwind and the finish line is downwind so they caught us, but we took a point from Paprec. Second race we had a good call on the tactics going to the right. The wind was tricky on the Bravo so we lead at the top mark. The second upwind we changed to the J1 and the others stayed on the J1.5s. So we were a little faster than everyone.”

A pep talk worked for the Team Vision Future team and it did too for Hendrik Brandis’ ClubSwan 50 winners Earlybird, last year’s winners. They went 3,2 to move up to second. At five points behind they have an outside chance of catching Leonardo Ferragamo’s dominant Cuordileone but American tactician Chris Larson concedes, “We need to be magicians to win it.

Cuordileone are sailing a very good regatta. We need to go out and try to sail a good race and if we got the opportunity on the first cross to be ahead of them then we might see what we can do after that.”

After several crew members including tactician Jochen Schümann moved to a different team, Earlybird had to regroup, Larson was recruited for this season along with new core crew.

Larson explained, “We had a long chat on the way out saying basically now anyone can win this regatta and we have to get mentally tough and just focus on our jobs going around the course and everybody did their jobs well and we had a good day. We lost one point to Cuordileone but they are sailing super well.”

“All the trimmers and myself are new. We have been in the top three at every regatta we have done and I am just trying to be a little more consistent. We are enjoying it. It is nice to see this as a replacement for the Farr 40 and the Swan 45s. It is nice to have a big boat one design class with over ten boats.”

Pete Greenhalgh, trimmer on the leading boat points out: “For tomorrow, we need to look closely at the forecast because it looks very flaky so we need to be careful as we might not get the 5 races in so we are going to stick like to Alinghi. We have a 3-point lead at the moment so we need to work it to our favour”.

They sailed with a special guest, “We had María Perelló, a 14 year old triple world Optimist champion, on board today. We took her off the dock with us and got her on the tiller straight away before racing started and the boat went foiling and she was ‘wow, I can’t believe this’ and she got to grips with it very quickly, so that was very exciting for her and for us and then we did the first race with her on board as a guest.”