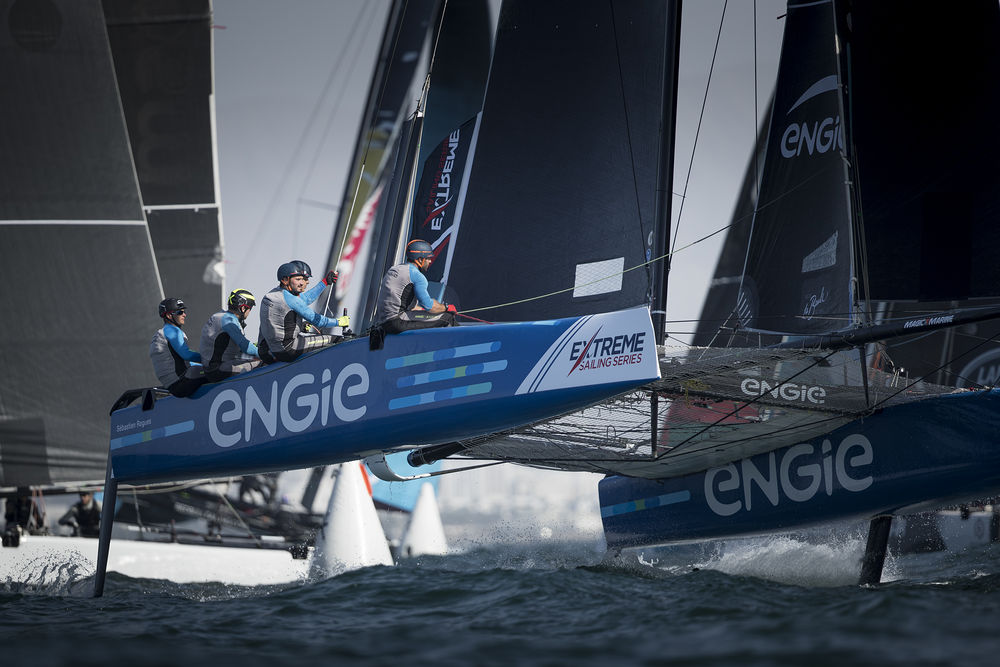 An epic finale to the opening Act of the Extreme Sailing Series™ is on the cards following an extraordinary penultimate day in Muscat that saw the overall lead change seven times in nine nail-biting races.

When the bumper day of super-fast foiling under Oman's bright blue skies finally wound up it was the Danes who came away with the tiniest of advantages – a minuscule one-point buffer over arch rivals Oman Air.

A frustrating day for Austria's Red Bull Sailing Team saw them slip out of the podium spots to be replaced with an on-fire Alinghi, who trail SAP Extreme Sailing Team by just four points.

With one more day of racing to go, including the final double points-scoring race, a monumental battle for the first Act win of the 2017 season is guaranteed.

SAP Extreme Sailing Team were the form team early on, notching up their sixth win in the opening race as the action got underway with reaching starts in a solid 12 to 15 knots of breeze.

But Oman Air and Alinghi immediately answered back with victories of their own which saw the team at the top of the Act standings change seven times over the course of the day.

It all came down to the last race of the day – and SAP Extreme Sailing Team's runner-up spot behind Alinghi mean they go into the finale of Act 1 in pole position.

“There was a lot of racing today but we're really happy being in the lead going into the last day,” said Rasmus Køstner, co-skipper of SAP Extreme Sailing Team. “But if you look at Alinghi, Oman Air and us we're very even and after so much racing it's within a couple of points. It will definitely be an interesting last day to the regatta – there's no room to slip up.”

After the teams' eagerness to start at the front of the fleet resulted in five general recalls, race director John Craig was forced to raise the black flag for the fifth race of the day signalling disqualification for any crew caught over the line early.

Red Bull Sailing Team, who began the day in second place overall, fell victim to Craig's ruling and were heavily penalised along with Land Rover BAR Academy and Team ENGIE.

Another team left exasperated were the young New Zealanders on Tawera Racing.

Chris Steele's men showed moments of brilliance that included their third win of Act 1, but they also scored four last-place finishes, two of which were caused by getting caught on racing marks.

“When we put the pieces together we're super competitive – we can beat any of the teams here,” said Steele. “But it just seems like when one mistake happens it snowballs into another and another and it's very hard to turn it around.

“At the moment we're all or nothing – we're either winning races or we're six or seventh or worse. Tomorrow is another day and we've just got to go back to basics and try to keep putting some low scores on the board.”

Fans around the world can watch tomorrow's racing live between 1330 and 1700 local time (UTC+4) on the Extreme Sailing Series Youtube and Facebook web pages, and can watch the live replay of today's racing on the official YouTube channel.