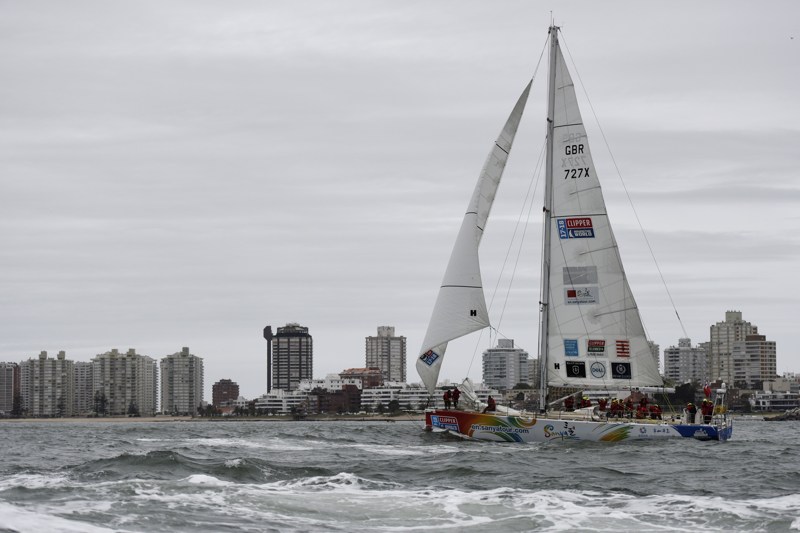 Arriving to hundreds of people waiting to greet the team, Tuck, said: “During the last big wind hole, which changed the leader board so much, I was pouring over the weather files for hours.

“I was pretty happy with my tactics but when you get to the wind hole and the wind completely drops, even though you know it is coming, you always have nightmares about other boats moving ahead, but you have to stick with your convictions.

“The crew have developed in leaps and bounds. We have a mixture of those who had sailing experience before and they helped to coach those with less experience. We had so many different situations; it’s just amazing how far they have come on.”

Tuck and her team also secured one bonus point during the race crossing the inaugural Scoring Gate in third position. However, the official winner of Race 1 is still to be confirmed as 58 hours, 44 minutes and 51 seconds redress is yet to be applied to Greenings’ finish time.

Round the world crew member Jan Riley, 57, an art gallery owner from Edinburgh, who had only sailed for two weeks before she signed up to do the Clipper Race, said: “I feel absolutely amazing. It’s been the most incredible experience.

“I had to take stock a couple of times to realise what we were doing and how amazing it was, fantastic. The arrival here to Punta del Este has been brilliant so it has been totally awesome.”

James Wrightson, 49, a brand director from Southampton, is also completing the full circumnavigation. He says: “It was the most awesome experience imaginable, some really big highs and some really big lows, but as a team we all pulled together.

“The whole of the Sanya Serenity Coast team was ‘serenity’ on board; it was so calm and measured with Wendy keeping it all together.

“The hardest part was coming on watch to find no wind, and the boat is just going around in circles and there is nothing you can do. That’s the toughest thing because you know everyone else is coming up behind you, but the breeze kicks in.”

The 6,400nm route, which is the equivalent distance of 10 Fastnet races, was eventful, including three medevacs and a varied mix of fickle winds in the Doldrums, challenging sea states, and champagne sailing conditions in the Trade Winds, which contributed to frequent changes on the leader board and a closely fought battle amongst the fleet.

Congratulating the team that is representing the city around the world, Sanya Vice Mayor, Zhenling Xu, said: “On behalf of the Sanya government and citizens, I would like to extend my warmest congratulations on Sanya Serenity Coast’s successful completion of Leg 1, from Liverpool, UK to Punta del Este, Uruguay.

“Over the past month, led by Skipper Wendy Tuck, you have been working hard, sailing across the Atlantic Ocean, across the hot Equator and through numerous tests, but the use of unity and wisdom to win this outstanding achievement shows the spirit of Sanya.”