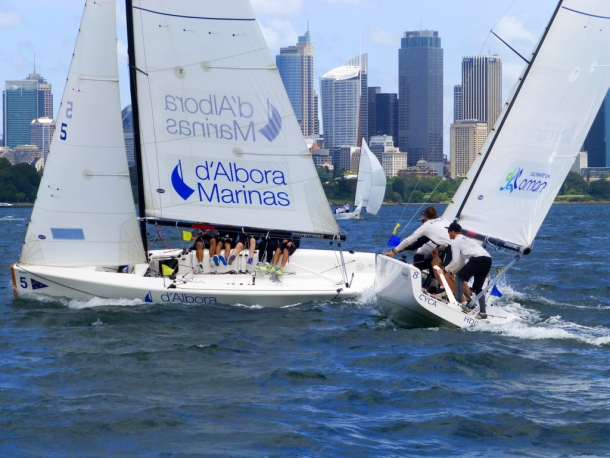 Perth yachtsman Sam Gilmour heads the leader board after day two of the Royal Sydney Yacht Squadron’s Hardy Cup with 12 wins out of 13 races in the ISAF Grade 3 Under 25 match racing regatta on Sydney Harbour.

However, only half of the Flight 2 races have been sailed,  with Jay Griffin from Sydney, New Zealander Chris Steele and another WA sailor, Matthew Jerwood and their crews well in the running to make the finals.

The one loss so far by Gilmour, whose Neptune Racing team represents Royal Freshwater Bay Yacht Club, has been to Jay Griffin from Sydney’s Cruising Yacht Club of Australia.

Griffin is second overall, having come through Round Robin 1 without a loss, but winning only one of three matches so far in Round Robin 2 to give him a total of 10 wins from 12 races.

Steele, representing the Royal New Zealand Yacht Squadron, won last week’s Warren Jones International Youth Regatta in Perth, beating Gilmour on a countback.  Today he completed Round Robin 1 with seven wins from nine races.  So far he has sailed only two races in Round Robin 2 for two wins, giving him an overall score of nine wins from 11 races.

Jerwood, sailing for the South of Perth Yacht Clubs, completed Round Robin 1 with five wins from nine races and so far has won three races in Round 2, giving his Redline Racing crew eight wins from 12 races sailed so far.

Defending Hardy Cup champion Jordan Reece and his Etihad Racing team, representing the host club, the Royal Sydney Yacht Squadron, finished Round Robin 1 with five wins and four losses, and then won two of his three match races in Round Robin 2.  Reece is fourth overall in standings.

The day began with a catch-up up of flights not sailed on Monday because of strong southerly winds in mid afternoon, with Jay Griffin completing his nine races unbeaten.

Conditions were ideal for match racing in the Elliott 7 sports boats, using asymmetrical spinnakers, with the southerly breeze freshening to 10-12 knots late morning and to 15 knots during the afternoon.

Henry Kernot, who steered the CYCA crew into third place overall in the Warren Jones Regatta, with normal helmsman Jay Griffin nursing an injured leg and sailing mainsheet, is back on mainsheet for the Hardy Cup with Griffin again on the helm.

“We finished the first round robin with nine wins but we started the second round robin this afternoon with two losses, one to Chris Steele and one to Matthew Jerwood,” Kernot said after today’s racing. “We have some work to do on boat handling.

“Once you get around the windward mark the downwind sailing is quite different to what we have been doing as we are using asymmetrical spinnakers for this regattas…we need to pick the laylines well and also the wind pressure.

“Also, we did not get good starts in the two races we lost this afternoon,” added Kernot who next week will sail in the Monsoon Cup in Malaysia, crewing for Keith Swinton.

“I expect that Sam Ellis will take over as helmsman for the CYCA crew in the two New Zealand youth events, in Auckland and Wellington, with Jay Griffin as their coach.”

Hardy Cup progressive scores for results from Round Robin 1 and unfinished Round Robin 2: