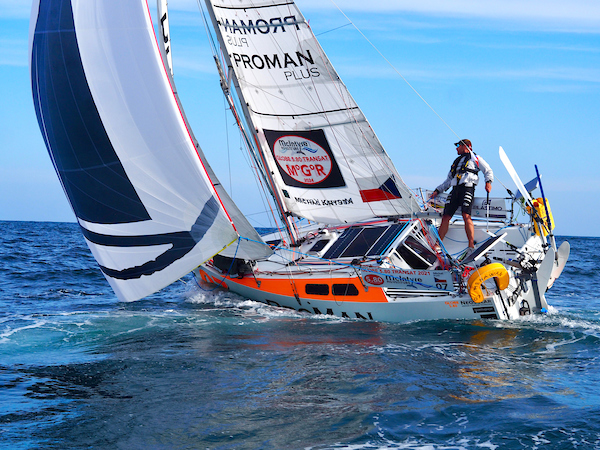 The McIntyre Adventure Globe 580 Transat is the first event for the new amateur build: the plywood one design 5.80 Mini Ocean Racer.

It is attracting strong interest with 165 builders in 27 countries. The first six launched from five countries are all entered in this inaugural race.

Conceived by Australian Don McIntyre (Founder of the Golden Globe and Ocean Globe Races) as a way to bring Mini Ocean Racing back to its roots for amateur sailors, young or old. Over the next 12 months up to 40 or more should be sailing.

Neil Chapman Founder and CEO of Boatshed International Yacht Brokerage is in Lagos to announce a GOLD Sponsorship with the Globe 5.80 Transat and supporting partnership to the Class Globe 5.80.

“We have been supporters of Don in the 2018 Golden Globe Race and again with this next 2022 GGR and the Class Globe 5.80 and this Globe Transat looks very exciting to us”.  Said Neil Chapman. “This is a natural fit that works for all our connections and I am sure it will be a great adventure with a strong future.”

Marina De Lagos is hosting the start at 1200 UTC on the October 31 which will be covered on Facebook live and on the www.Globe580Transat.com tracking page. The yachts then sail 600 miles to Marina Rubicon in Lanzarote as a qualifier. On November 18 the 3000-mile solo race across the Atlantic begins and many followers are waiting to see how the Globe 5.80’s perform. First home to the Antigua Yacht Club Marina wins.

“The beauty of the 5.80 lies in its simplicity. Easy to build and sail, even under windvane. It is not meant to be the fastest 5.80mtr yacht, but she sails well, can be driven hard and being a One-Design, we are all in the same boat, with the exact same Quantum sails which are very cool,” said Founder Don McIntyre, also racing his own TREKKA-01 in the Globe Transat (Seniors class).

“We have worlds best practice for all safety and security issues and have restricted some equipment to keep it affordable. We allow satellite phones for media interviews and up to four daily tweets from entrants, so with the live tracker and regular social media updates followers will have fun!”

When asked why his was doing the race, Swiss entrant Etienne Messikommer, 33, sailing Numbatou-88, said that he is “doing it for the fame, money and women!” Messikommer  took a year to build his Globe 5.80 from a kit and does not like stainless steel, so painted every piece black. He only went with the Selden plain mast as he ran out of time to paint it.

Peter Kenyon, 40, from the UK has built his 5.80 Origami-47 from a kit. When asked about why he is competing, Kenyon said, “I have been asking myself that for a week! I would just say that’s a personal challenge. First of all, what I wanted to do is build the boat, and then well I’ve built the boat now so why don’t I just try and sail the Transat. I am still questioning whether I am going to make it.”

Severin Hummer (25) also from Switzerland sailing SHRIMP-98 is following a dream and looking forward to the 2023 Globe Transat. “It was my dream to do ocean sailing and I was looking for a mini. I expect to learn a lot of stuff. And have fun,” said Hummer.

Michal Krysta (36) from Czech Republic sailing Menawan-07  is a well know adventurer, but not as familiar with offshore sailing. He paraglides and does rock climbing and endurance running – everything you do not need to succeed in a Globe 5.80. But he is driven to win.

“For me it’s another experience, another adventure and a big adventure,” said Krysta.