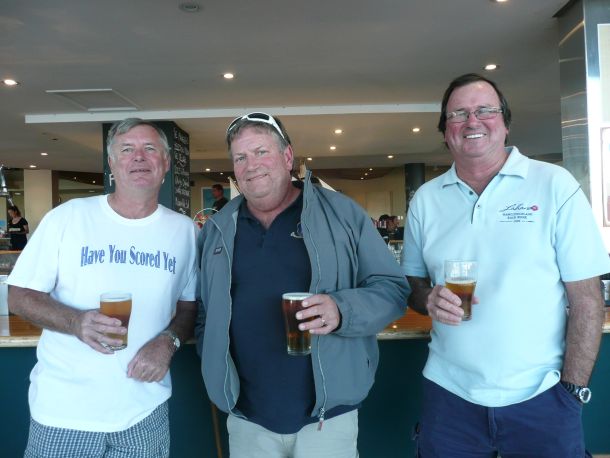 The original Sunshine Coast Regatta (SCOR) ran for 20 years through the 80s and 90s. It attracted huge names within the yachting industry, such as Hugh Treharne – the tactician of Australia’s winning America’s Cup team. In its prime, the event would host up to 60 boats.

Trevor “Trusty” Gourlay, Greg “Groggo” Gilliam, Bob “Robbo” Robertson and Ian “Brownie” Brownhill have participated in their fair share of races during SCOR’s long history, and had plenty of stories to tell.

“My first one, I think, was in ’77,” said Trusty, “At that stage the Commodore was Johnny Bates, anyway we had a race halfway up to Noosa. And Batesy, not only was he Commodore, he was racing in the series and also setting the buoy! And of course, we’re racing and we get halfway up there…and go 'Where’s the bloody buoy?!' Oh here comes Batesy, we had to circle around for a few minutes, and he dropped the buoy and off we go again!”

“I remember we were sitting around at the start one day, sitting around waiting for something to happen.” said Brownie, “There were more people in the water than there were on the beach. You’d swim over to someone’s boat, have a yak, and swim back to your own boat. There were just boats bobbing around in the water everywhere.”

“In the early days, it was really hard,” remembered Robbo, “If you won it, you sailed really well…It was a really hard regatta.”

“One year, there was this Kiwi boat called ‘Future Shock’ that was owned by a wine maker called Ian Margan,” said Trusty, “We had some damn good crew on board, and we expected to beat this Kiwi boat. But we got trounced in every race. Literally trounced. I said to Groggo before, 'Remember that one?', and he said, 'Nope, I’ve chosen to forget!'”

Robbo also brought up the fact that, in the past, people may have encountered problems with the bar at the entrance. Trusty agreed remembering that one year, he and Groggo had to take well-known veteran New Zealand yacht ‘Starlight Express’ across the bar at 3am in the morning to avoid getting stuck. But he said that now “The bar’s changed. If anyone’s had issues with bar problems in yester-year – it’s not there, it’s not an issue.”

“They were good days weren’t they, with the lawn out here, and the jugs and the prawns from down the road” remembered Groggo. “…and the best bit was that the finish line to the bar is about 15 minutes.”

“I could get there in eight,” replied Robbo.

The Sunshine Coast Yacht Club (SCYC) will be reviving the much-loved Sunshine Coast Ocean Regatta on Monday 4th– Friday 8th August, 2014.The event will be once again held in the sparkling waters off the Sunshine Coast between Noosa and Caloundra. The event is perfectly timed for those wanting to do some short course racing after the Sydney to Southport Yacht Race, before heading up North to the Hamilton Island Race Week. It also offers an alternative to the longer Brisbane to Keppel Yacht Race for sailors wanting to do a shorter race this year.

Free berthing will be available for competing boats at Mooloolaba Marina for the period Saturday 2nd August – Sunday 11thAugust.Notice of Race and entry forms can be found in the Events Calendar section on www.scyc.net.au. Eligible boats may send entries to the SCYC Regatta Office, together with the required entry fee of $200.00, by 1700 hours on Friday 25th July 2014.