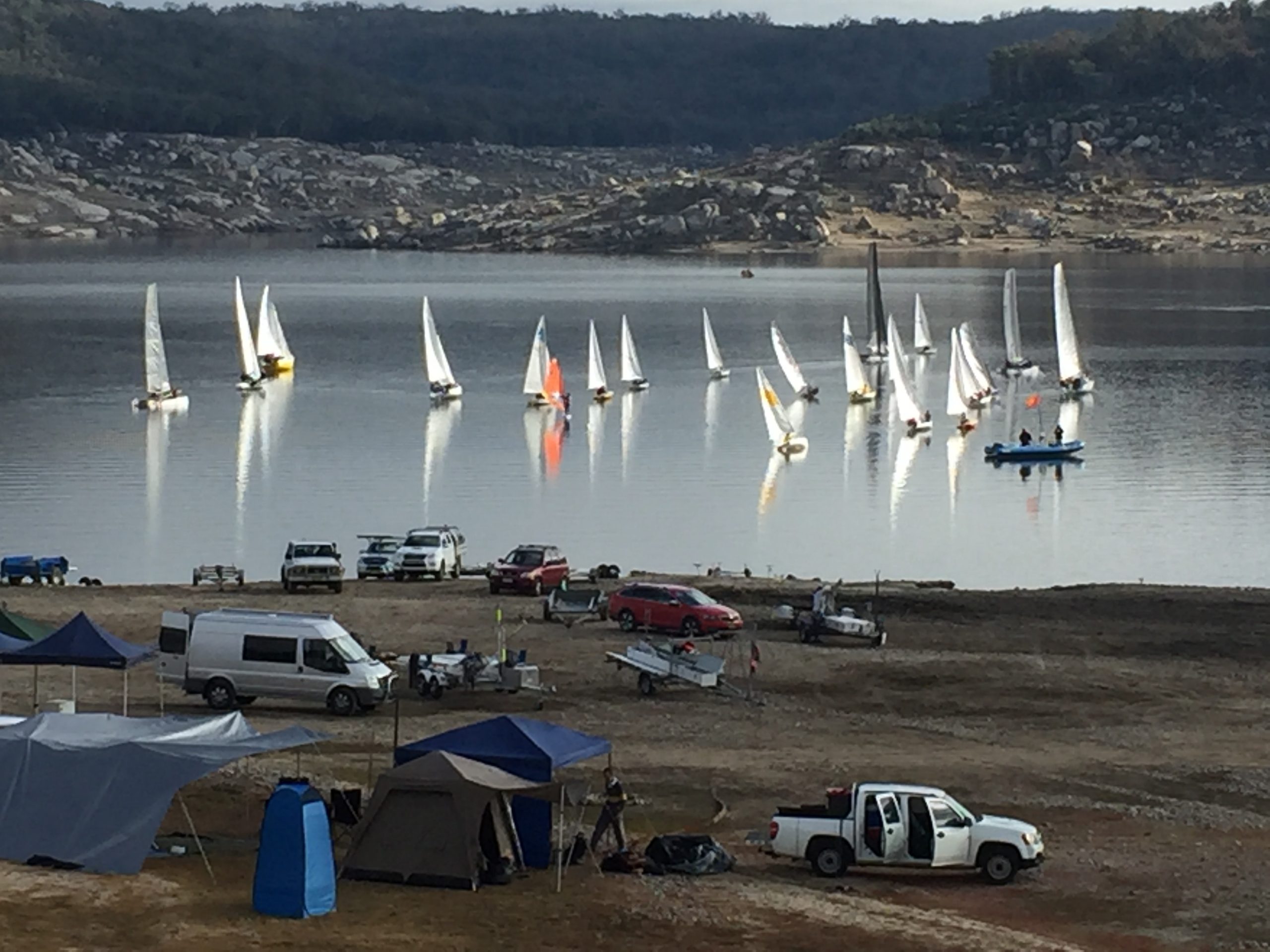 It's the middle of winter when the breeze usually evaporates along with the warm temperatures and frenzied summer coastal weekend race schedule. For those whose addiction runs deep and need a fix there’s the option to burn the savings and head to Europe, or make the best of an inland regatta.

The 51st annual June long weekend Keepit Kool regatta is traditionally run on the Lake Keepit dam but with the water level at a dire 1% organisers reached out to their inland friends for an alternate location and the entire show was moved to Copeton Dam, 200kms further north. Copeton when full covers a huge area and at 9.3% capacity there was just enough water to go sailing.

On the necessary change of location, Lake Keepit Sailing Club Commodore Ian Pine said: “When faced with unsailable water levels at Keepit long-term coastal friends told us they would still support an inland regatta and we decided Copeton Dam was the only option. Once committed, our hard-working members stuck to the task of running a Keepit-style regatta.”

Inland winter regattas tends to be a drift-fest but what they lack in breeze they make up for in spades with road trips, quintessential Australian pubs, magical outback scenery, country cooking and hospitality, and time spent with sailing friends and family around an evening campfire.

Thirty hardy crews arrived for the weekend, some from Keepit and New England surrounds while others travelled from Newcastle, Lake Macquarie, Kempsey, Sydney and as far north as Southport. Conditions were light over the three days with plenty of droopy flags and shortened course as the wind struggled to get to 5 knots.

“It’s extraordinary looking back over the images from that weekend that Australian Sailing’s race officer Carl Webster managed to complete five of the six planned races,” Pine added.

Smooth water meant competitors across a variety of classes – Lasers, NS15, 13’ skiff, Viper 640, Nacra 20, F16s, A-Class, Elliott 7 – were able to sneak along in the zephyrs that slipped down the boulder-strewn dry slopes of the dam. Under dark clouds reflected in the still, deep water – up to 40ms in parts which made putting enough mark tackle down a challenge – the late afternoon scene was apocalyptic. Another description bandied about was ‘like sailing in the bottom of a bucket’.

Brett White's Nacra 20 seemed to generate its own breeze in the drifting contest that made up the Multihull series. Brett and son Lachie, fresh from the N17 Europeans in Weymouth, took the regatta honours from the two F16s, As and Maricat.

Ashore, Lake Keepit’s hard-working volunteers kept sailors fed and watered from the headquarters at the holiday park bunkhouse, even delivering hot lunches to the dam shores to save the drive back up the dusty road between races.

Following a hearty meal on the Saturday evening the traditional yabby races generated plenty of laughs as sailors and other campers bid on the feistiest of crustaceans only to have them lose an important limb, or worse, between the final bid and when the ice-cream bucket was tipped upside down in the middle of the chalk circle amidst the yelling.

“Watching and reading news stories on the drought ravaging inland New South Wales and seeing it in reality are very different,” said Lisa Ratcliff who raced an F16 with Beau White from the Royal Prince Alfred Yacht Club.

“It was good to support the organisers, spend some money with local operators and show our city kids the hardship country areas are facing. Let’s hope between now and the 52nd Keepit Kool the rains come to restore hope and replenish the dams so the event can return to Lake Keepit in 2020.”