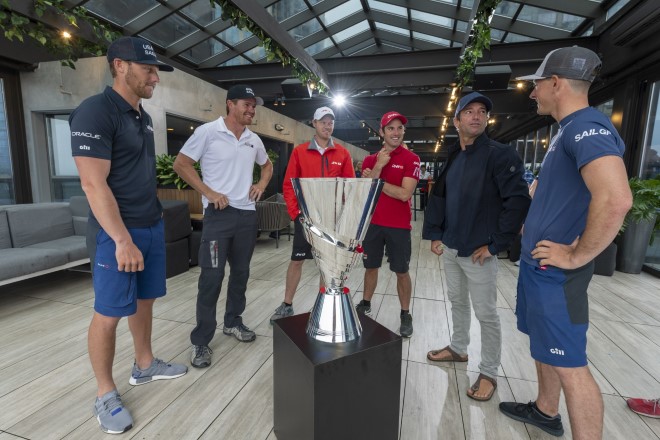 NEW YORK – June 20, 2019 – Today SailGP unveiled a striking trophy by world-renowned trophy maker Thomas Lyte that will be presented to the overall winning national team at the end of Season 1.

Regarded as the world’s leading trophy maker, Thomas Lyte – which serves as the gold and silversmith to Her Majesty Queen Elizabeth – has been responsible for designing and crafting some of the most iconic trophies worldwide, including the FA Cup, the Webb Ellis Rugby World Cup and the Ryder Cup.

From the start, the brief was to create a trophy with a progressive feel that captured the extreme drama, energy and performance of SailGP. To ensure the winning team could truly commemorate its victory and create an iconic sporting moment, it was crucial that the trophy could be uplifted and used in celebration.

The result is a unique ‘V’ shaped trophy in various stages of deconstruction. Standing 26 inches/65 cm high, crafted in 28 lbs./12.5 kilos of sterling silver and 24-carat gold plating, the trophy takes inspiration from the power of the wind and the speeds of the world’s fastest sail racing boats, taking part in this cutting-edge, new global league.

“We wanted to create something that communicated the extreme drama, extreme energy and extreme performance of SailGP, which is taking sailing to the next level,” said SailGP CEO Sir Russell Coutts. “We asked for the design to encapsulate the power and the passion of the forward-thinking boats and world-class athletes, and we are delighted that Kevin Baker and his team at Thomas Lyte have excelled in creating something so striking that does exactly that.”

Thomas Lyte’s design team worked with SailGP in creating more than 35 concepts during the design process to craft an iconic symbol that would reimagine sailing. Once the design had been agreed and the brief met, Thomas Lyte’s highly skilled craftsmen set to work using traditional skills and modern methods to create the end piece. The complete consultation, design and crafting process took over four months.

“This has been a hugely exciting project – we were tasked with creating a trophy that would be forever at the cutting edge,” said Thomas Lyte Founder/CEO Kevin Baker. “Our creative team and craftsmen took inspiration from the power of the wind and the thrilling boat speeds that result in this exciting new sport, whereby winds of up to 30 mph and boats traveling at speeds double that come into force. We are thrilled with the outcome and believe that this exquisite trophy will now sit alongside some of the most quintessential trophies in global sport.”

The trophy will be awarded at the Grand Final of the season in Marseille (September 20-22), where the winning team will not only be able to hold the trophy aloft, but also walk away with $1 million.

Teams representing Australia, China, France, Great Britain, Japan and the United States will take a step closer to getting their hands on the trophy when they take part in two days racing in New York City, June 21-22, for the third event in the inaugural season. Currently, the Australia SailGP Team, helmed by Olympic gold medalist Tom Slingsby, is leading the charge, but that could all change this weekend after another six races.

New York SailGP takes place from 5-6:30 p.m. at Brookfield Place in Battery Park City on the Hudson River. Racing will take place just off the Battery and north toward Rockefeller Park, with Ellis Island and Manhattan’s iconic skyline serving as a stunning backdrop. The official free-to-the-public Race Village at Brookfield will be the hub for all activity over the race period. For details and tickets, head to SailGP.com/NewYork.