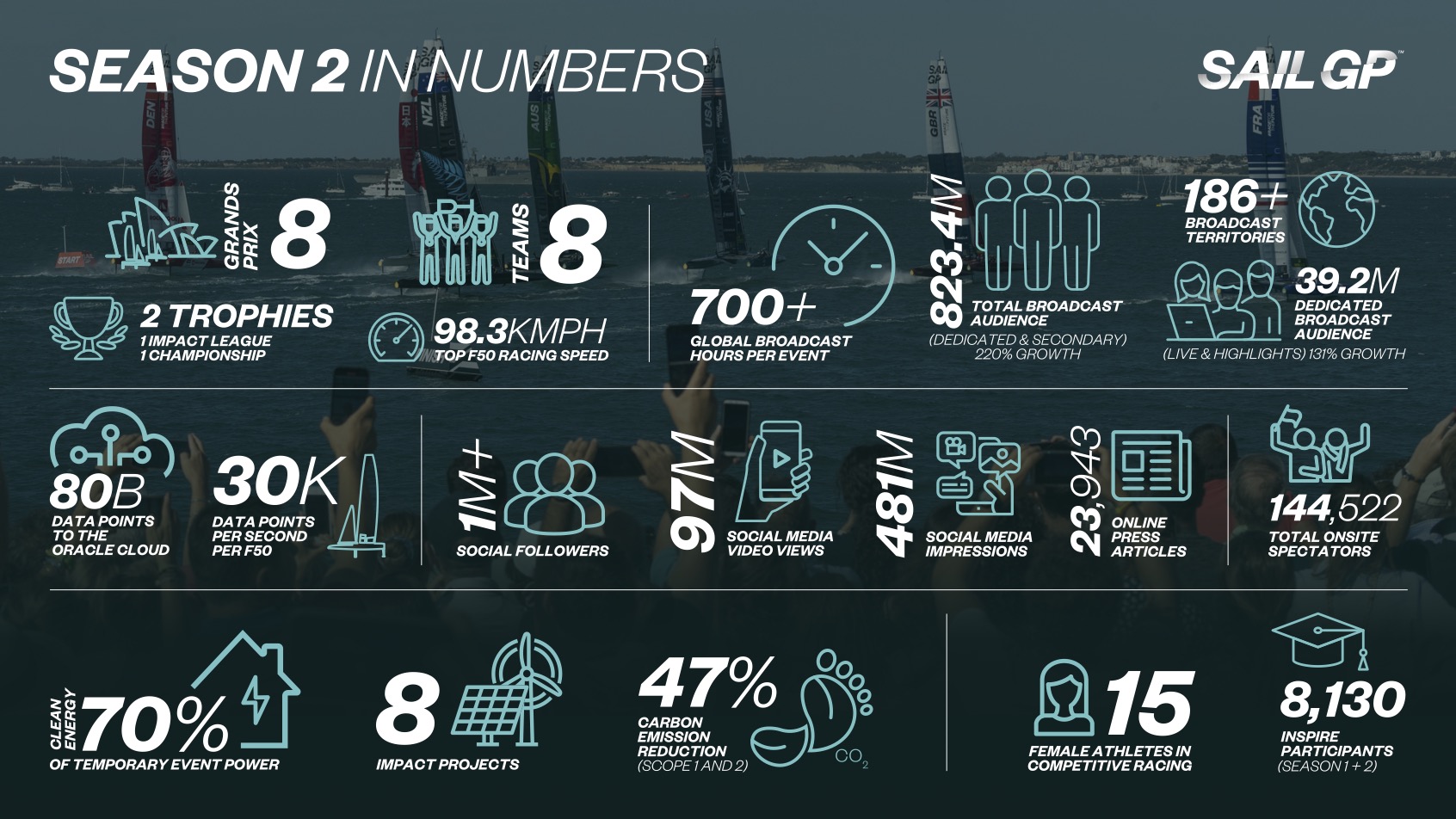 SailGP experienced rapid growth across all areas of operation in Season 2.

SailGP welcomed more viewers, attendees, online followers and athletes than ever in Season 2, while making a greater positive impact on the planet, as the league releases its look back at Season 2.

From the broadcast product to the on-water racing to the environmental benefit and impact, the purpose-driven global racing championship has seen significant growth in both its realised ambitions and new achievements.

On the water the league grew from six to eight teams in Season 2 and held eight events, up from five in Season 1. SailGP also continued its push for greater diversity in global sport with 15 female athletes involved in competitive racing in Season 2, thanks to the Women’s Pathway Program, a new initiative for the season.

Over 700 broadcast hours were enjoyed per event in over 186 territories, as the league was seen by more fans than ever before around the world. At the same time media coverage of the league greatly increased, with 23,943 press articles written about SailGP, an increase of 246 per cent from Season 1.

On site, 144,522 fans attended a SailGP event, an achievement made all the more extraordinary given it was a season heavily disrupted and restricted in terms of in-person attendance by COVID-19. This number is driven by ticketed and estimated non-ticketed spectators both on and off the water.

The league’s female fanbase also greatly grew in Season 2, and it increased its younger viewership, with a 21 per cent increase in the number of 18–34-year-olds watching SailGP events digitally.

Season 2 saw the introduction of SailGP’s second podium for the planet, the Impact League, which tracks the positive actions the teams make to reduce their overall carbon footprint and help accelerate inclusivity in sailing. It was part of wider positive growth for the league outside of competitive racing, which continued at pace.

SailGP’s Inspire program, a first-of-its-kind global youth sailing and career program, involved 5,072 young people, meaning that after just two seasons the league is already 81 per cent of its way to the stated goal of 10,000 people involved in the program by Season 5. Inspire is part of the league’s Better Sport strategy and used as a force for good and a tool to develop life-long skills.

Through Inspire’s three distinct programs – Learning, Careers, and Racing – SailGP is able to build a future for youth through sustainable sport.

As a climate positive sport SailGP takes its role to reduce its footprint very seriously and has achieved a 47 per cent carbon emission reduction in all fuels for temporary power, consisting of the on-water fleet, helicopter usage and electricity at events, across scope 1 and 2 emissions. Clean energy was 70 per cent of the temporary event power, a combination of solar power and HVO/B100 fuels.

An overwhelming majority of athletes said they believed other sports should have an Impact League and that the introduction of the league had made them do things differently as a team when it came to acting sustainably, driving inclusivity and reducing their carbon footprint.

At every event SailGP drives impact to the local community through clean energy or blue carbon projects, eight in total were held in Season 2 including solar panel legacy projects and seagrass restoration. SailGP also hosted over 200 attendees across its Champions for Change (CFC) thought leadership forums, designed to raise awareness of climate challenges, share ideas and make connections.

Contributions to the forums came from companies such as Parley for the Oceans, CDP and C40 among others.

As a result of the CFC event held before the Spain Sail Grand Prix, the New Zealand team was instrumental in the signing of an historic agreement between the Governments of New Zealand and Spain to address the conservation emergency facing seabirds that migrate across international waters, including albatrosses and petrels. SailGP will also shortly be releasing its first ever Impact Report.

SaiGP was once again supported by the Oracle Cloud and stream analytics system, which processes and delivers 30,000 data points every second from each F50 catamaran competing in a SailGP race. Oracle delivered about 80 billion data points to the cloud during Season 2.

SailGP CEO Sir Russell Coutts said: “The growth of our league in Season 2, in truly unprecedented circumstances, is a fantastic testament to the commitment, dedication and enthusiasm of our fans, athletes and staff.

“SailGP has never shied away from its pioneering ambition – to redefine the sport by creating a fully sustainable, annual global racing league for the top professional athletes in the sport – and these impressive results across all of our platforms, and in all areas of the business, are recognition of how we are realizing those ambitions. The growth of our league is exciting and looks set to continue with what we’ve already achieved with additional venues and teams for Season 3.”

The global organization worked with Engage Digital, PwC Bermuda, Deloitte, YouGov ® Sport and Meltwater to look at all areas of the business and help understand the full impact of SailGP in its second season. A comprehensive season report will be available later this year.

SailGP Season 3 boasts an impressive global calendar of events, starting with the Bermuda Sail Grand Prix presented by Hamilton Princess on May 14 and 15, culminating in the Grand Final in San Francisco in May 2023. In between, the championship visits iconic destinations including Chicago, Plymouth, Copenhagen, Saint-Tropez, Cádiz, Dubai and Christchurch.