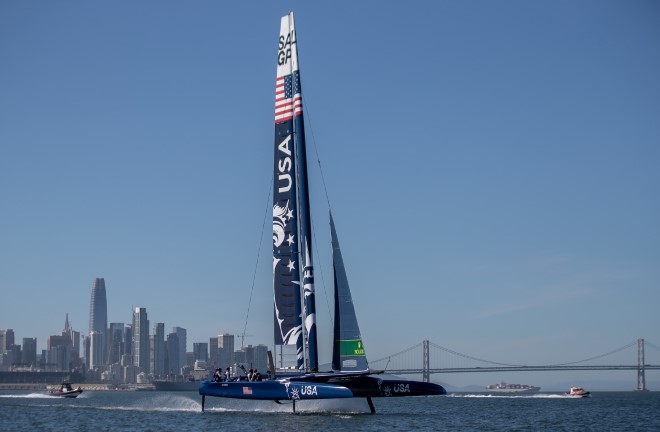 SAN FRANCISCO – April 23, 2019 – With two weeks until SailGP’s inaugural stateside racing, the U.S. SailGP team made a splash when its F50 racing catamaran was hoisted into the waters of San Francisco Bay for the very first time.

The U.S. was the first boat on the water, grabbing the attention of shore-side and on-water viewers alike. Each SailGP team will be racing identical wingsailed F50s, which have been specifically designed and engineered for SailGP competition. These technologically superior boats showcase the most precise and skilled sailing in the world. Capable of reaching speeds never before seen in on-water racing, the hydrofoiling F50 is powered by a 78-foot wingsail and features cutting-edge technology that’s been in development for nearly 10 years. During San Francisco competition, sailors are anticipated to break sailing’s elusive 50 knot barrier, which translates to astonishing speeds of 60 mph.

The boat now features the Statue of Liberty on both the wingsail and on either side of the hull, adding to the patriotic flair of the boat sailed by an all-American crew.

“I love the new branding,” said helmsman Rome Kirby. “We changed it up for the U.S. debut and are excited to get the new look out on the water. It’s going to unreal to watch these boats in action. It’s so intense on the boat, and I’m sure you can see that off the boat. There is a high chance we will break the 50-knot barrier. It will be a wild ride.”

SailGP is redefining the sport, offering the next generation of high-adrenaline, competitive sailing. Bringing the sport closer to fans than ever before, spectators in the Bay Area will be afforded the opportunity to witness the action up close as teams representing the United States, Australia, China, France, Great Britain and Japan battle for the title on May 4 and 5.

Currently, the Australia SailGP Team helmed by local legend Tom Slingsby sits atop the rankings, with Japan nipping at the Aussies’ heels. The U.S. SailGP Team sits in sixth place, but is a mere two points behind the fourth and fifth place teams.

“We are a new team still coming together, but have already made great progress,” said Kirby. “We learned a ton from the Sydney event, and are looking forward to sailing here in San Francisco. Our team likes sailing in big breeze and that is what San Francisco is known for. “

San Francisco Bay is known for its strong sea breezes and tidal flows and will present exciting challenges to each of the six national teams. Competing in a total of five short-format fleet races over the two-day period, the top two teams will face off in a match race finale on Sunday, May 5 to determine the San Francisco SailGP champion.

The San Francisco SailGP Race Village will run along the Marina Yacht Club Peninsula, providing stunning views of the competition, with the Golden Gate Bridge and Alcatraz Island serving as backdrops. The course – designed to augment the Bay’s natural amphitheater shape – will be orientated adjacent to the shore.

The Race Village will serve as the center of the festivities, an ideal place to take in the race action and cheer on the national teams. The Race Village will offer an array of food and beverage options, music by a DJ, commentary during the racing to explain and supplement the action, and an award ceremony at the conclusion of the event.

While the SailGP Race Village is free to the public, special ticketed options are available to enhance the SailGP experience.

Additionally, SailGP has partnered with the Red and White Fleet – San Francisco’s leading bay cruise operator – to provide two premium on-water experiences. Exclusive ticket packages are being offered on the Zalophus and the Enhydra, with both spectator boats positioned within the race zone, guaranteeing the closest viewing of the action, as well as complimentary food and beverage.

Tickets are available at SailGP.com/SanFrancisco.

The SailGP APP – a next generation immersive experience that puts fans in control of the action – is available free via the App Store. Fans can view live data and video from the thrilling races and personalize the boats, camera angles and data that features in their feeds. An Android version is anticipated to be released prior to San Francisco SailGP.