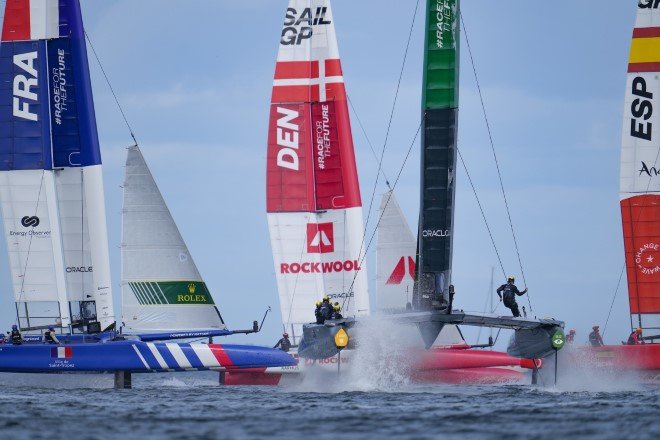 Thrills and spills at SailGP training with the British setting a new speed record and the Danish capsizing. Pic - SailGP

Aarhus Bay, playground to the inaugural ROCKWOOL Denmark Sail Grand Prix, is proving itself as a drama-filled stage for this week’s return to SailGP racing action.

With a capsize by the Danish team and a new speed record for the British already on the books during practice racing, fans are sure to witness a spectacular main event on August 20-21.

The Danish event sees the return of both sail racing giants and Olympians who will reunite with their SailGP Teams to battle for supremacy on Danish waters. Ben Ainslie has returned to the driver’s seat for Great Britain, along with a new family member to cheer him on. And, Peter Burling and Blair Tuke are back in charge of the New Zealand SailGP Team following silver medal success in Tokyo.

For the home team, Nicolai Sehested will be looking to newly crowned golden girl Anne-Marie Rindom – fresh from success at the Tokyo Olympics – to help catapult the team to the front of the highly-competitive fleet. Sehested will be relying on her local knowledge, alongside fellow Olympic gold medallist Martin Kirketerp, following many years of Olympic training on Aarhus Bay.

After suffering a capsize during practice, Sehested is eager to put this behind the team and get back on course to impress the hometown crowd with a win.

Sehested said: “We are super excited to be here and it is something we always wanted to do – compete in front of a home crowd. We know that this venue has the potential to be a spectacular racing venue and we are really excited to put a show on for the fans.

“There is always pressure and we always have to deliver, and that doesn’t change at home or away. So we are going to work hard to get that podium finish.”

While Denmark’s spill earlier this week created a buzz, the British team upped the ante by breaking the SailGP speed record, which it currently held. Clocking in at an electrifying 98.3 km/h (53.1 knots) with the 18 meter wingsail, the Great Britain SailGP Team has now taken to setting the speed bar with Ainslie back in the driving seat.

Ainslie said: “I think if it’s like that it’s going to be a blast. I expect to see someone getting to triple figures at some point – breaking the 100 km/h record. That’s pretty incredible for any boat, let alone these boats.

“The forecast is for a drop in wind for racing, so the speed might not be up there, but the action will certainly be spot on.”

Points remain tight as the eight national teams head into Season 2’s fourth event. Leading the way are Tom Slingsby’s Australia, Great Britain and Billy Besson’s French team in the top three seats, with only one point separating second and third place. Jimmy Spithill’s U.S. team is just off the podium in fourth.

Slingsby said: “Fortunately, we had a great last event, but it’s been up and down for us so far. We’ve had a last, a third and a first so we are not exactly consistent.

“We are moving in the right direction, and with plenty of events to go we are at the right end so far but we do need consistency. If one team is able to have top three or top four events throughout the season they will make that Final race.”

New Zealand SailGP Team, currently sitting in eighth position, welcomes back Burling (driver) and Tuke (wing trimmer) – along with Josh Junior (grinder), and Andy Maloney (flight controller) – after their impressive Olympic campaign in Tokyo. The Kiwi team has some ground to make up but Burling hopes to climb back up the leaderboard.

Burling said: “I think for us it’s a lot about time on the water and really maximizing those opportunities we get to train as a group on the boat. And, over the last couple of days we have got a lot more comfortable, especially in the upper wind strength that we’ll see today.

“But we are very much still in a learning phase. The good thing is that from the data no one can hide or do anything different, so it is pretty easy to go back and review what other teams were doing at specific events and at specific times. That is what we have been doing, and we have been learning a lot.”

In fifth spot is Nathan Outteridge’s Japan SailGP Team with Leo Takahashi (flight controller) and Sena Takano back in action after the Tokyo Olympics; and right behind them is Spain SailGP Team, reuniting with their recent Olympians, bronze medalist Joan Cardona (grinder) and Jordi Xammar (driver), alongside Florian Trittel (wing trimmer) and Tara Pacheco.

In addition to the high-speed racing on the water, SailGP is also in a race for the future  while off the water. And, Denmark saw the launch of the first-ever Champions for Change – a thought leadership network designed to share knowledge and collaborate with partner organizations and host cities to accelerate the transition to clean energy and drive solutions for a better planet.

Excitement leading up to the ROCKWOOL Denmark Sail Grand Prix included other Race For The Future initiatives. Inspire Learning – one of SailGP’s community outreach programs – saw its largest gathering of students take part in a five day STEM series, hosted alongside Aarhus University.

With almost 1,000 students taking part, activities focused on the elements – Earth, Wind, Sun, Water – under the league’s Powered by Nature mantle. The 80 schools participating in the workshops will then carry forward lessons throughout their curriculum.

Partnerships in Aarhus also include work with Danish organization Little Sun to support communities around the world to combat energy poverty including SailGP directly supporting a school in Tanzania.

The ROCKWOOL Denmark SailGP will comprise two days of racing with five fleet races followed by a podium race, with the top three boats in the ultimate showdown to decide the winner on Saturday, August 21.