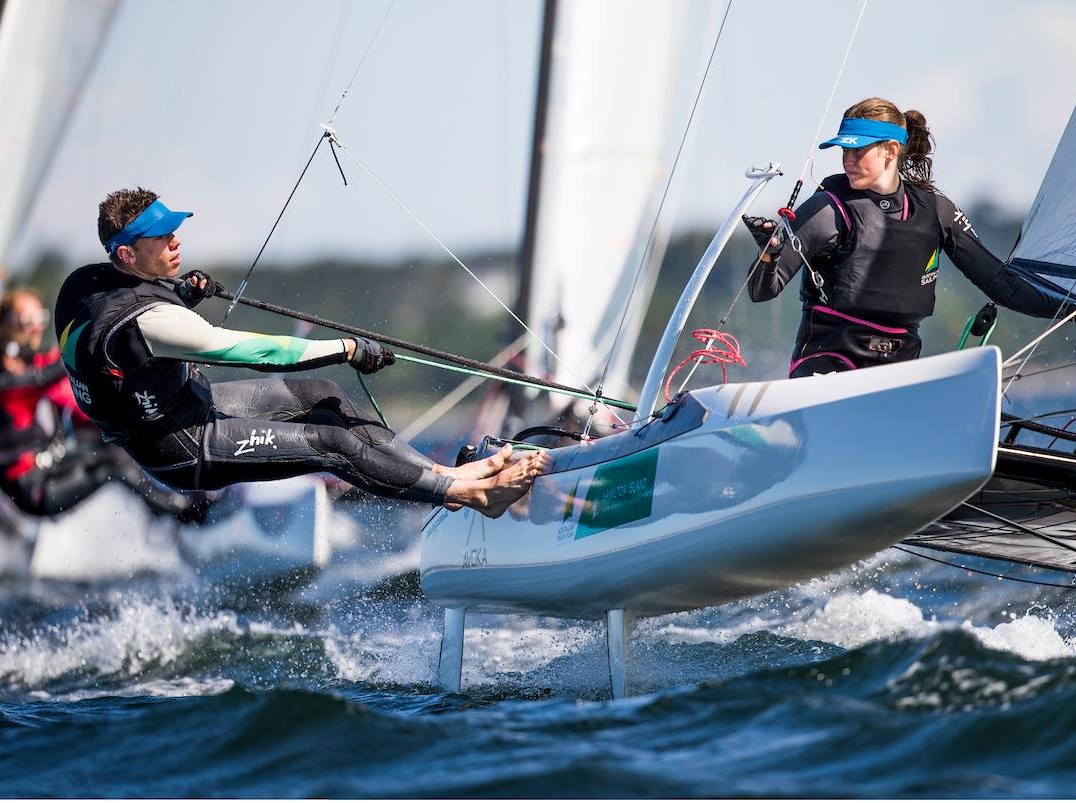 Australia’s top Nacra 17 sailors are keen to gain precious experience in the full-foiling boats at Sail Melbourne and Sail Sydney, but confirmation the events will be 100-point regattas is sure to stir the competitive spirit.

The Nacra 17 World Championships in France in September became a battle for survival for many crews, who received the newly-fitted flyers days before the regatta. Australia’s Rio Olympics Silver medalists Jason Waterhouse and Lisa Darmanin finished 11th, and Paul Darmanin and Lucy Copeland came 34th.

“We got the boat three days before the worlds, so we were really thrown in the deep end,” Paul Darmanin said. “It was really hard, they’re difficult to sail. I’ve only sailed the boat eight times and we won’t be getting them back here [to Australia] until mid-November. So that’s why Sail Melbourne and Sail Sydney are really important, to just spend time on the water.”

The spectacular foiling Nacras are one of more than 20 classes – including nine Olympic classes – which will race in the two events, drawing hundreds of competitors, including some of the big names of Australian sailing.

“They’ll be great chances to get plenty of hours in, racing and practicing manoeuvres,” Damanin said. “In terms of results, it doesn’t matter all that much, especially with the Australian competitors all being quite inexperienced with the boats.”

However, with the regattas being granted 100-point status – classifying them as major international events – the lure of world ranking points will be strong, likely persuading the sailors to try to get one over their opponents.

“It is a great opportunity to get points on the board and help for World Cup selections,” Paul Darmanin said.

With the Olympics still three years away, Darmanin and his crew, Lucy Copeland, are aiming for continued improvement after a challenging but rewarding 12 months.

“This year’s been one of the most exciting years and one in which we’ve gained so much,” he said. “It’s the first time we’ve been really adopted as part of the Australian Sailing Squad. There are a lot of teams pushing each other to improve instead of it being all about the fight for selection. It’s very early [in the Olympic cycle], so it’s all about helping each other out.

“Lucy and I are working a lot together, we’re getting a bit more attention, it’s been great. I think we’ve improved a lot. We’ve got very limited time in summer before we’ve got to send the boats back to Europe [for the northern summer], so we want to make the most of Sail Melbourne and Sail Sydney.”