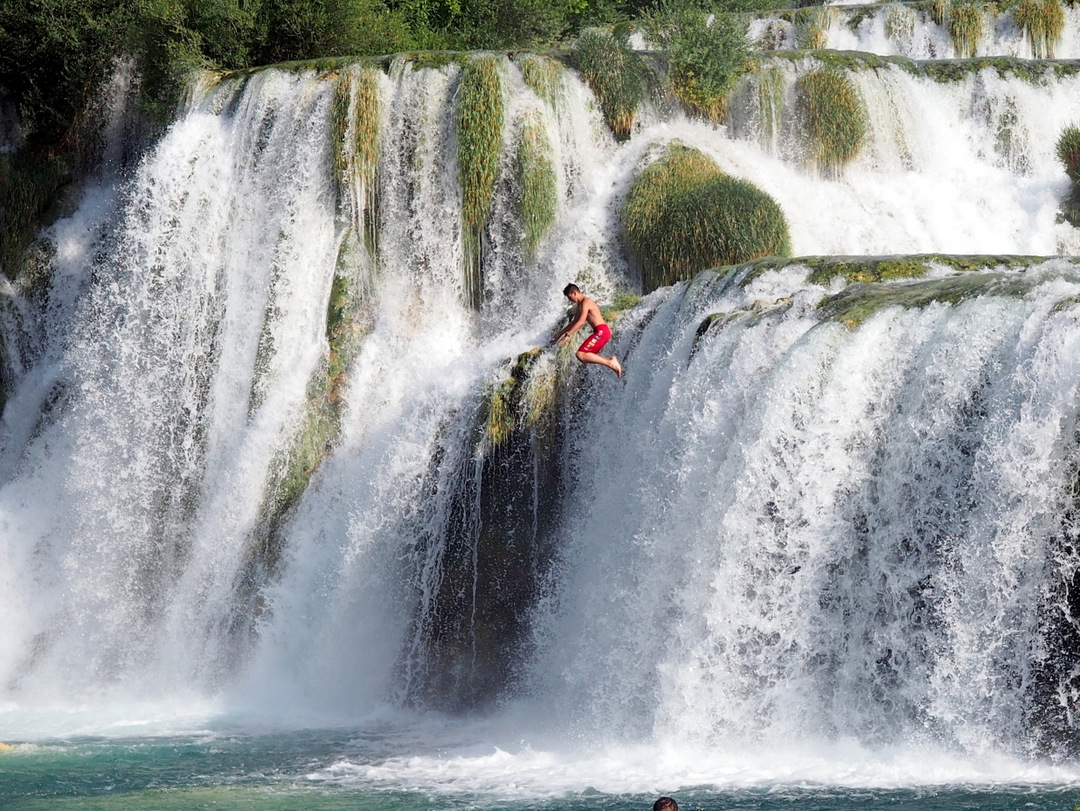 Croatia has justifiably risen to the top of the European tourism ladder over recent years. The unfortunate consequence of course is that Split, Hvar, Korcula and Dubrovnik have become overwhelmed, mainly by ship-borne tourists ticking boxes during five hour visits when they mob the shore, buy an ice-cream, return to the ship and report they have “seen” Croatia.

Even in the sailing world, low-impact cruising has succumbed to the sheer weight of massive flotillas whose crews inundate the towns and ports, make a lot of noise, stretch the facilities to bursting point and beg the question about alternative places to go.

In fact, the Kornati National Park combined with the coastal towns between Sibenik and Zadar offers a perfect mix of quaint sea ports, isolated bays and islands with just a comfortable number of seaside and seasonal restaurants to keep upward pressure on the weight loss program!

Sibenik is a serious attraction in its own right; gleaming white against the placid waters of the bay. The city has a magnificent medieval heart and a wonderfully authentic feel. The stone labyrinth of steep backstreets and alleys is a joy to explore. In the main square you will see the 15th-century stone Cathedral of St James decorated with 71 sculpted faces.

Nearby, the Sibenik City Museum in the 14th-century Prince’s Palace has exhibits ranging from prehistory to the present. The white stone St Michael’s Fortress has an open-air theatre, with views of Sibenik Bay – the view is worth the climb.

The other fort now included among UNESCO World Heritage sites is the spectacular St Nicholas Fortress on the bay.
Sibenik sits at the entrance to a 10 mile long, steep sided, navigable waterway that runs directly inland to Krka, where the falls of the national park tumble down a series of steps and eventually to the sea. The town of Krka has a great, if small, marina and the restaurants in the village will introduce you to Croatian cuisine – which is sure to offer more than just a few surprises for those with a sense of culinary adventure.

Once out of the Sibenik waterway it’s off into the wild blue yonder of the Kornati National Park. Here, 109 somewhat stark limestone islands,high, narrow and paralleling each other, create idyllic waterways that funnel the breezes in a north-west to south-east direction; all on clean, flat water. Some of the long, brown hills are home to long-haired sheep, two of which on Kornati Island found their way, slow roasted, to our lunch time table accompanied by roasted vegetables to set off a taste explosion that will last with me forever.

Only a few of the islands have seasonal restaurants that cater to the sailing fraternity; there is practically no other form of tourism in the Kornati apart from a few day tripper boats that chug out from the mainland ports. There are, however, a few small towns dotted through the park and Sali is one of the best of them, if not the best of any small town I have found anywhere.

The quay offers easy, stern-to moorings and when a nearby bar owner spotted our Australian flags he came out to enquire. His family had left for Australia after crossing the 100 miles of Adriatic Sea in a rowing boat to Italy as refugees during the Tito era. The two sons sauntered down to the quay with questions about why we had come to Croatia on holidays when Australia is supposedly at the end of the holiday rainbow. We ,of course, sauntered in return to his bar and sat in the shade of the verandah, sipping ales as we pondered the magical view across the harbour.

The big town at the northern end of our circuit was Zadar, once the capital of Croatia but ruled as if by lottery since the 9th century BC by Illyrians, Romans, the Avars, Croats, Franks, Crusaders, Venetians, the Austrians and by Italy. Today Zadar is easily the equal of Dubrovnik with the famous sea organ playing continuously and variously according to the waves. The town is clean, the shopping is great I am told and the restaurants are excellent, even if a bit expensive.

The return trip to Sibenik is largely along the shore line of the Uglian and Pashman Islands, with idyllic stops along the way.The last stop before re-entering the Krka River to the charter base is Kakan; one quay, a few moorings and a restaurant under the pine trees lining the shore.

Our rally group filled the place and we savoured the previous night’s catch accompanied by the classic dietary bombshells: fresh cut, deep fried chips! A stage under the stars saw a performance by two very capable musicians who gave us their repertoire of traditional Croatian songs mixed with ballads we knew and heartily sang along with.

Finally we pass Tito’s submarine base near Sibenik and our idyllic two weeks is done, enriched without a doubt by the hosting of Trevor and Maggie Joyce and their accomplice in Croatia Robbie Sangulin, whose family also returned to Croatia after succeeding in various enterprises in Australia.

Visit www.marinerboating.com for details of more of our Mediterranean adventures for 2020.