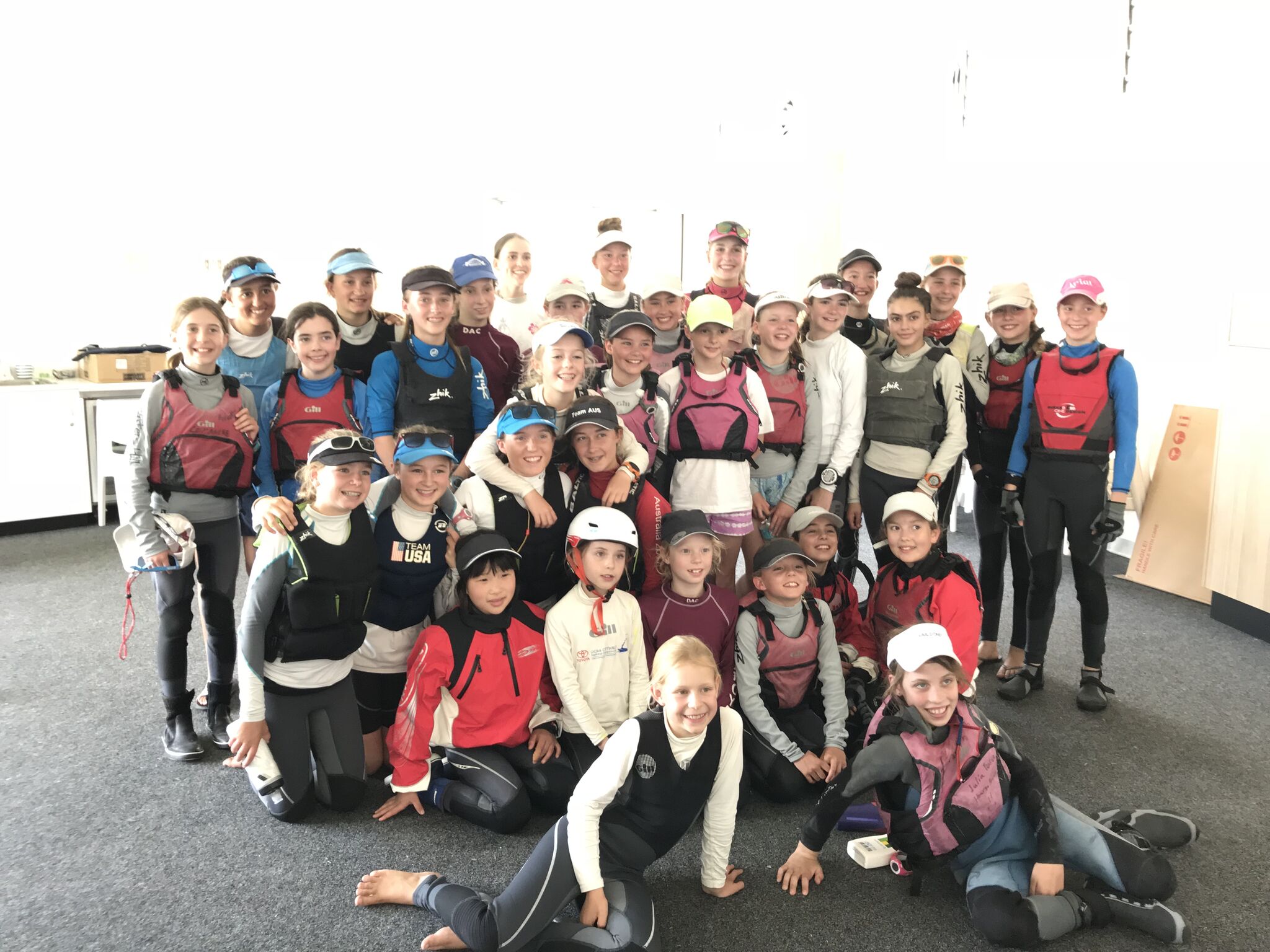 The Royal Prince Alfred Yacht Club (RPAYC), on the Pittwater side of the wonderful Northern Beaches peninsula, about an hour from the hustle and bustle of the Sydney CBD, was the venue for this season’s OptiChicks weekend – and what a weekend it was for our next generation of female sailors.

With an excited gaggle of 35 current OptiChick attendees, four OptiGrads as mentors and “big sisters”, along with some outstanding senior sailing talent, backed up by wonderful OptiParents, volunteers and the ever-helpful staff of the RPAYC Junior Office and Function Centre team, all that was left to chance was the weather! And was it perfect? Of course it was – it always is on the Peninsula!

RPAYC is celebrating its 150th year, having been founded in October 1867, and taking the Royal prefix by decree in 1911. It has a rich and storied history of sailing in craft of all shapes and sizes, a tradition that continues today with a very strong yacht racing scene, all the way down to a great learn to sail program in Optimists and other small dinghies. High performance sailing doesn’t quite do justice to the level of sailing achieved by members of RPAYC, with America’s Cup and Olympic winning skippers, match racing world champions, skiff and dinghy champions all regulars at the Club. It is an exciting place to visit and experience, with wondrous grounds and a lively entertainment area. Just how lively was put to the test by the arrival of the OptiChicks!!!

This was the fifth running of OptiChicks in NSW, with previous iterations having been run at BYRA, Hunters Hill (x2) and Gosford. What was terrific this year was the input the OptiChicks themselves had into the event, with current Australian Optimist Squad member Olivia Wiliams designing the wonderful T-shirt the girls were presented with upon arrival, and the event logo generally. Again, the request was from the girls for less structure, more adventure and new experiences, and great speakers. And that the things that matter to girls in a social sense are really important to foster and develop, in the company of fantastic role models and mentors. OptiChicks 2017/18 delivered on all fronts!

After a warm welcome and introductions all round, the OptiChicks, who ranged from Australian Team members down to the greenest of rookies barely out of the learn to sail programs at their respective clubs, gathered for a session of match racing on the Club’s Elliot 7 yachts. Match racing young gun skipper Claire Costanzo and her crew welcomed the wide-eyed youngsters on board their sleek yachts, and took them for an adrenaline filled sail around the Pittwater in a freshening sea breeze. It was an incredible experience for the OptiChicks, as Claire and her team flew out only a few short hours later bound for South Korea and the Women’s International Match Racing Series. More than one OptiChick was heard to mention that “sailing in a team of girls would be great fun”, and it's highly likely the super skills gained as helms on their Optimists will stand them in good stead as they progress onto larger craft.

During the Elliot 7 session, the four OptiGrad’s were having a ball zipping around in RPAYC’s Hobie Wave cats, along with groups of the OptiChicks taking a rotation off the yachts. This informal fun session created great bonds, as the OptiGrads, who have gone on to compete in Laser 4.7s, Nacra 15’s and 29’ers were able to share their experiences and reminisces with the younger sailors.

Later in the afternoon the OptiChicks rigged their Optimist dinghies and headed out into the Bay, a fresh breeze creating an exciting environment for skills to be put to the test. Dodging moored yachts and cats, pleasure traffic and serious racers proved effortless for these skilled helms, and much laughter was heard, amongst the slap of water on hulls and the occasional shake of a sail through a tack or gybe. Time on the water just means so much for any sailor, and each of these youngsters found a moment or two of pure joy and learning on this afternoon, as well as some close fought racing!

Former Optimist World Championship representative and OptiGrad Mina Ferguson jumped from her Laser to an Opti “for old times sake”, and was heard to be muttering “wow these girls are GOOD!” as she jumped back in the bigger boat!! A wonderful experience for the emerging young guns to race against a fine Australian rep of only a season ago!

Returning to shore meant the opportunity for a good old-fashioned hose down, and yes, some of the water even hit the dinghies! Don’t ever be fooled by the delightful smiles of these young sailors – there is always mischief just an unattended hose away!!!

In the evening the girls heard from Female Sailors of the Year from the recent Australian Sailing Awards, 29er World Champions and now 49erFX flyers Annie Wilmot and Tash Bryant. Tash and Annie, not too far removed from their first dinghies, spoke passionately and excitedly about their experiences and future goals in sailing. In particular, the work they are currently doing as they race hard to represent Australia at the 2020 Olympics in Tokyo in the 49er FX. It was just incredible to see the sparkle in the OptiChicks eye’s as they listened to these fine role models speak – it possibly being the first time the young sailors have been up close with such high achievers. And, as is the modern way, they all piled in for some epic selfies with the OptiChicks, which made their talk resonate all the more with the youngsters! You can see some of the shots at

An evening snack, a movie and then lights out … and well, maybe a little chitter chatter as well!!! The wonderful Jackie Brown and Linda Pearce, who bravely volunteered to sleep over, reported that things did settle reasonably quickly, as tired bodies and engaged minds slowly wound down.

On the Sunday morning the OptiChicks, and OptiGrad mentors, were put through their paces by the dynamic fitness team of Tana and Dean including, some thought somewhat harshly for a Sunday – a “beep test”!!! No doubting the resilience of these sailors though, and some very good tests were recorded!

A yummy breakfast, more chatter and then it was time to pack up, waving goodbye to friends old and new, and chattering about their net catch up at Sail Sydney in December, and then Nationals in January. Some OptiChicks even raced back to their home clubs in time for the afternoon point-score, before crawling into bed late afternoon, tired yet delighted with the weekend, and totally in love with sailing!

Of course, events like this don’t happen without a host of support, and we thank Andrew from www.boatcrewgear.com.au for his ongoing and generous support for the OptiChicks, the RPAYC Sailing Office team and the members and staff of RPAYC for their wonderful hospitality, and the ever-energetic Taylor, Williams, and Attwood families for their great organisation skills and OptiChick wrangling over the weekend!

A special thank you to the OptiGrad Mentors, who volunteered their weekends to the event, which they each described as “one of, if not THE, best weekends of the year”! Well done Mina, Sylvie Stannage, Alana Hodzic and Bella Green – as organiser Karen Williams said “They did an amazing job helping the girls on and off the water.  They are such great role models for the younger girls on and off the water, and it is fantastic to see them still being involved with OptiChicks.” These four are heading into a major competition block over the coming months, and it was wonderful to have them supporting the event that they had loved as youngsters! Sail well!

Finally, a big shout out to all the other OptiChick style gatherings across Australia and around the world – we love seeing photos and stories via social media, and meeting up at regattas all over the place!! Maybe an OptiChicks gathering at the home of the Optimist, Clearwater Yacht Club in Florida, to celebrate the 75th anniversary of the timeless Clark Mills design, in 2022?