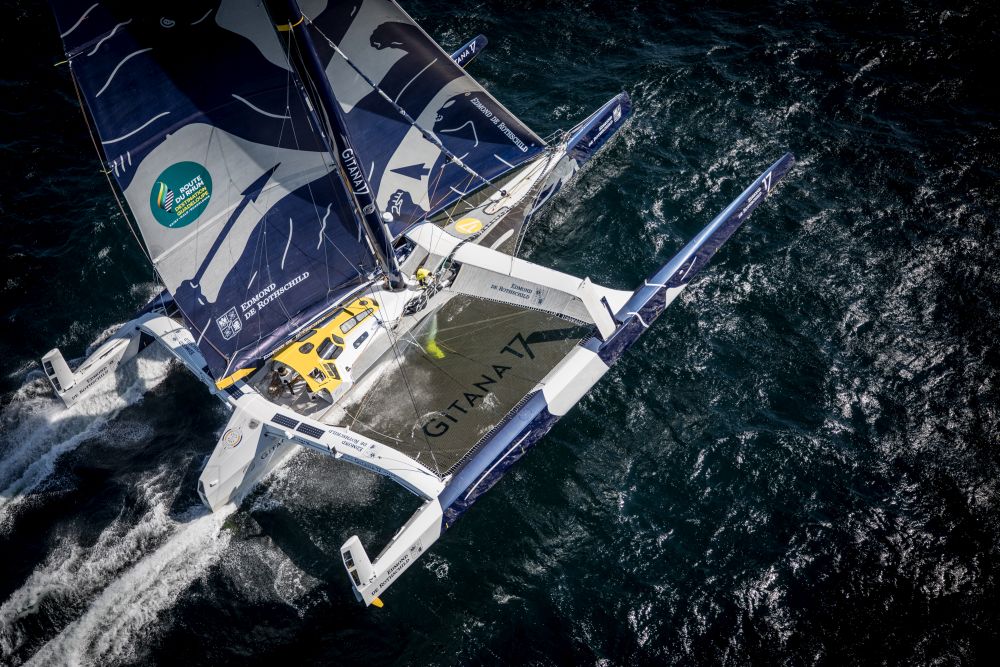 The big day is approaching and with just 12 days to go until they set sail across the Atlantic, the 123 entries in the 11th Route du Rhum are making for Saint Malo and its famous ramparts en masse.

The race village opens its doors tomorrow, Wednesday 24 October, at 12:00 GMT. Meantime, the Maxi trimaran Edmond de Rothschild, which ranks among the six entries in the Ultime category, will have to wait another week until she can join in the festivities, the extraordinary proportions of these giants prompting the organisation to put in place a few extra measures, starting with berths in the outer harbour. In this way, it is in the peace and quiet of its technical base in Lorient that the five-arrow team is putting the final touches to this major first in singlehanded configuration. And as Sébastien Josse admitted this morning, on his return from his final training session before kick-off on 4 November 2018: “it’s all systems go!”

Six Ultimes, the most spectacular and famous boats in the fleet, will race each other across the 3,542-mile Atlantic course. The standard is extremely high and rarely does one get to see such a level playing field all gathered together. These flying machines really mark the turning point in offshore racing. The Maxi Edmond de Rothschild is one of three foiling trimarans and was the first to be launched in July 2017. The philosophy behind the team and the design of the boat make them without question stand out for both boldness and innovation.

One last session offshore before the rush in Saint Malo

Yesterday, Monday 22 October, shortly before 14:00 GMT, the Maxi Edmond de Rothschild left the submarine base in Lorient and set a course for the open ocean. Given that this is a period of ‘transhumance’ for those sailors competing in the Route du Rhum – Destination Guadeloupe as they make for the coast of northern Brittany, it would be entirely logical to assume that Gitana 17 was heading for Saint Malo herself…

However, this outing spanning a few hours, along the edge of the continental shelf, actually heralded the end of the training phases for Sébastien Josse: “This year we haven’t exactly had a glut of strong breezes and it’s fair to say that I love to get in one breezy passage before a race start, especially so in solo format. During the pre-start phases, you quickly find yourself slightly isolated from the boat, whilst it’s very important for me to maintain that contact and stay focused on what lies ahead.

“Last night, there was a small weather window for that so I didn’t think twice about it. We had a medium to strong NE’ly wind – up to 25 knots – flat seas all in all, save for the return leg between Rochebonne and Belle-Ile en Mer. Such conditions were favourable for making fast headway with peak speeds in excess of 44 knots…

“To my mind, this rhythm and this pace is exactly what will make a difference for me in the Rhum! It was a ‘false solo’ format, in full Route du Rhum configuration as the boat is loaded up and could set sail for Pointe-à-Pitre today.”

The programme for the final days on land

Le Naye lock gates, which mark the compulsory gateway into the basins in Saint Malo, measures almost 25 metres wide, but it’s not enough to enable five of the six Maxis in the Ultime category to gain access and moor alongside the bulk of the fleet in this Route du Rhum – Destination Guadeloupe. As such, several berths have been specially arranged in the outer harbour around the Harbour Station.

As the organisers explained: “The Maxi Edmond de Rothschild team agreed to take up a berth alongside the dock at the Harbour Station, access to which is dependent on the depth of the water. In this way, it will have to wait until 30 October and a favourable tidal coefficient to tie up alongside.”

Though the latest addition to the Gitana fleet can only be viewed from next Tuesday onwards, this is not the case for her skipper. Indeed, the solo sailor will be present in Saint Malo throughout the weekend for the reception briefing as well as the traditional presentation of the skippers, which will take place within the walled city, at the Fosse aux Lions, on Saturday 27 October from 16:00 GMT. The solo sailor will then head back to Lorient to deliver his giant to the race start from Monday if weather conditions remain in line with current forecasts, with a scheduled arrival in Saint Malo the following morning.

Sébastien Josse will then tackle the home straight in his preparations to set sail on his 3rd Route du Rhum, which is naturally a debut performance aboard a flying multihull! “The coming days will be split between relaxing with family and the somewhat hectic pre-start schedules incorporating briefings and media appointments. I’m going to gradually get my head around the weather in some depth, but for now it’s still too early and there’s no point building castles in the air,” concluded the solo sailor.

Launched in July 2017, the Maxi Edmond de Rothschild is the first offshore racing maxi-multihull designed to fly in the open ocean. Designed by the naval architect Guillaume Verdier and his team in collaboration with the Gitana design office, this giant measuring 32 metres long and 23 metres wide is part Archimedean boat, part flying craft.

A trail-blazer for a new generation, this boat has aggressive and innovative, purposeful planing hulls, which are a far cry from those used on previous oceanic multihulls. Everything about the forms of the floats and the central hull shout flight. She is equipped with the very latest architectural and technical advances in terms of appendages, with T-foil rudders and L-shaped foils measuring over 5.4m high. With this in mind, a great deal of thought has gone into the aerodynamics of the platform. The form of the beams in particular is evidence of this, as is the integration of the living cell / cockpit between the two beams.