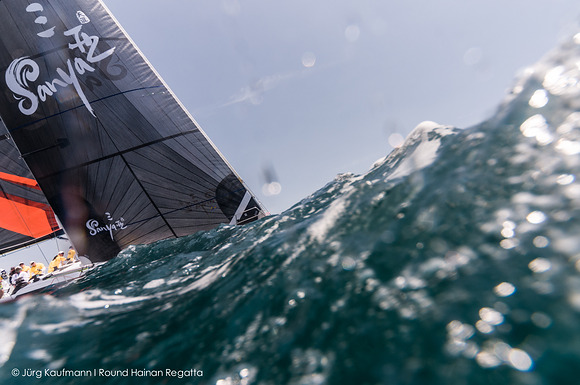 The 6th Aloha Round Hainan Regatta came to an end with the two fleets IRC 1&2 and 3/4/5 completing their second and final leg from Haikou and Wanning to Sanya respectively. All along the night and on the day's early hours the boats kept crossing the finish line in a good breeze that had been accompanying them all along the 280 and 120 nm legs along the east coast of Hainan Island.

After a week long much contested series, the combined results of the in-port series and the offshore legs, were considered to compile the final ranking. In IRC1, despite the win in corrected time in the second offshore leg, Swan 82 UBox could not snatch the overall win to RHN Dubois50 Sanya skippered by US Jim Johnstone, who commented about his first racing experience on the brand new Ed Dubois designed 50 footer: “The boat is very well balanced especially in choppy water, and forgiving to not very experienced sailors. I must congratulate my crew, they did a very good job, considering we only had a couple of day's practice before the race.” Sanya's sister ship Lingshui got on the third step of the podium.

In class IRC2Archambault 40 Seawolf scored an impressive in-port series and performed extremely well overall in the offshore legs but the win in corrected time went to the smaller Sun Fast 3200 Big Boys Sailing Team with an all Chinese crew lead by skipper Shen Sheng. “This is the fourth time we take part in the race, it's not our first win but certainly this is the best for my team. It was a totally new boat for us and the smallest in the fleet but I believe our secret weapon lies in good teamwork and team spirit. Hainan is just perfect for sailing, it's a great racing location, good wind conditions.” added Shen “I hope more and more teams will decide to take the challenge and be on the line next year.”

The IRC3 class' in-port series was dominated by Mills41 Ambush, skippered by Italian sailor Alberto Carraro with an all Chinese crew. Unfortunately during the fist offshore leg to Wanning, the Hong Kong based boat suffered some sails issues and had to abandon, compromising its final ranking. Overall victory went to Hanse 575 Xirm, Ambush closed in second and Oceanis 58 ATC in third.

With a very consistent series (1/2/3) First 40 CR HNA Sailing Team with Chinese helm and former member of China's Olympic team Li Xiaojing led his young crew to jump on the highest step of the podium in class IRC 4, whit Grand Soleil 46 Lianchuang as runner-up and Oceanis 45 Wanzhu finishing in third. “It was not the easiest win, we had to fight hard for it” said Li “but it tastes good and we will sure be back next year to defend our title.”

And finally in IRC5 French female skipper Laurence Nicolas and her local crew on Sun Fast 3200 Banshanbandao scored an impressive win in the in-port series and in both offshore legs to Wanning and back, getting gold and distancing second and third placed Oceanis 43s Hongzhou and Lan Jing by no less than 15 and 16 points.

“I'm very satisfied with this year's race. I was a bit wary at first because the conditions were pretty tough and some crews had little offshore experience, plus the route was scattered with fishing nets and other hazards. But all went well, the crews and the organizers seem to be very happy.” Declared race director Bernard Bonneau, “I was impressed by some of the boat's performances, namely Ambush for its consistency and Seawolf that despite not having the best handicap has managed to do well in corrected time too. And, of course the new RHN Dubois 50. It's a boat that has been launched only a few weeks ago but looks extremely fast and easy to handle.” On the future of the race, Bonneau said: “I'm convinced that this was an excellent way for the local teams to gain more experience, they improved a lot and I'm sure they will help greatly promote the race on the Chinese sailing circuit. I hope and I believe more local and international teams will decide to be part of the event next year. Given he island's beauty, a real offshore and exciting route, perfect sailing conditions, I can't find better reasons to join.”

The 2015 edition ended in grand style with the prize-giving ceremony in the Sanya Serenity Marina Race village.