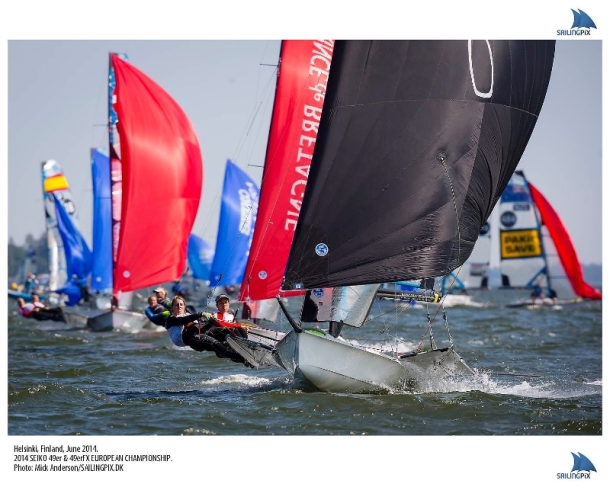 Day one of racing at 49er Europeans. Photo Mick Anderson/Sailingpix.dk

The opening day was a tricky one for a variety of reasons and started with a BANG.  2013 European's Silver medalists, Dylan Fletcher and Alain Sign hit a rock near the port layline of course C, splitting their hull wide open.  Brazil's Thomas Low-Beer saw the incident, “It was extreme, they stopped so fast that the boat when vertical, bow buried, and stern straight in the air.  We tacked immediately and hoped to miss the rock.”

Dylan and Alain limped back to shore and may be done for the event, but they explained how they will try to fix it.  At least four others made contact with the bottom, including fellow Team Great Britain sailors Jon Pink and Stuart Bithell.  John and Stuart escaped somewhat and only missing the second race and the rest were able to continue.  They were able to pull their 49er onto a rib, wrestle the broken daggerboard out of the boat, pack some tape into the hole and sail with their spare board.  They left the stern plug out of the boat for the whole race, so water entering through the centerboard trunk could pulse out while they sailed.  “We drained it on the downwinds and filled her back up on the upwinds,” said Stuart Bithell.

An incident of this sort puts all sorts of pressure on race officials, who investigated the situation.  Additional marking has been placed over shallow spots on both course A and C.  Both team who missed races filed for redress and redress was granted in both cases.  Having finished 2 of the three races, John Pink and Stuart Bithell have been awarded a 7th place for race 2, the average of their other two races.  Dylan Fletcher and Alain Sign, having finished no races, have a tougher climb as they will be awarded the average of their qualifying scores for races 1 and 2 if there are 6 races, and also race 3 if there are at least 7 races.  They are certainly hoping for enough wind to see the qualifying series through.

Elsewhere on the waters of Helsinki the three 49er fleets raced first in three even groups of 28.  The wind was a about 7-12 knots under a warm sun and remained quite steady through the day, building a little bit.  Jonas Warrer and Anders Thomsen (DEN) had a solid day  on course B saying that it was necessary to get left, but not necessarily only left.  As the shifts came through teams could take lifts to the right at the bottom if there was an opportunity, but in the top left there was a bit more pressure and an advantageous shift.  They scored a 1, 13, 2, and are safely on their way in this championship.

The leaders overnight are popular Italians Giuseppe Angilella and Pietro Zucchetti.  They have been on the sidelines for almost six months as Giuseppe has been having some back trouble, but he's back now and strong enough to get out to a solid day.

Some of the overall favorites have run into a bit of trouble being disqualified for early starts.  Local favorite Lauri Lehtinen, 2012 London gold medalist Nathan Outteridge, Japanese Olympian Yukio Makino, and #sailforyoursoul Nico Delle Karth all were caught out in races.  With 83 boats going down to a 26 boat gold fleet, these teams will need to avoid more catastrophe's on their way through qualifying.  2nd overall after the initial results came out, Jorge Lima and Jose Costa were disqualified from one of the races for a port-starboard incident and will also need to keep clean the rest of the way.

The 49erFX fleet got some glamour conditions sailing second up.  Not only did they get the best of the breeze, they also had 4 races schedule, each completed under unblemished skies.   Many of the favorites had solid days and all are still in contention.  It was taxing for the teams to race four 3 lap races, but under such glorious conditions the race committee had no choice but to push forward with the plan to run an extra race even on day 1.

Kate MacGregor and Katrina Best had a great day, with a bullet, two seconds and a twelfth.  They are followed closely by the Italians, Brazilians, and Jurczok & Llorenz from Germany.  There is lots more racing to go!  The 49erFX fleet has a tight turnaround as they are first up for 3 races on Day 2, followed by the 49er fleet with up to 4 races starting at 13:00.

Tune in at 09:00 for the Magic Marine Morning Show where we'll have fantastic guests each day.  Day 2 will feature Matt McGovern from Ireland and Erik Heil from Germany.