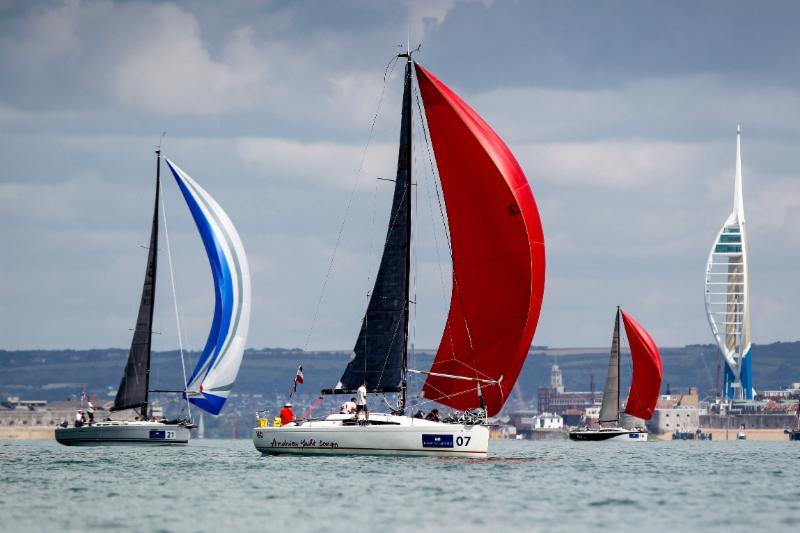 Getting up to speed for the season ahead

28/03/2018
The Royal Ocean Racing Club's domestic sailing season starts this Bank Holiday weekend with the RORC Easter Challenge. This inshore event on the Solent promises a mix of windward-leeward and round the cans racing over three days, in 15-20 knots, culminating in a prizegiving at the RORC Cowes Clubhouse on Sunday afternoon where a seemingly endless supply of Easter eggs are up for grabs.
As in 2017, all sizes of yachts are competing. Longest is the Ker 46 Lady Mariposa while the smallest are the hotly competitive Quarter Tonners, Berry Aarts' Wings, Julian Metherell's Bullit and Sam Laidlaw's Aguila. Aguila's crew are gunning for a third consecutive Easter Challenge class win. In fact most of 2017's winners are back, including Roger Bowden's King 40, Nifty and Ed Fishwick's Sun Fast 3600, Redshift Reloaded.
Many teams are competing to try out new hardware. For example, from the Netherlands the de Graaf family have a new Baraka GP, the former Otra Vez, an all-carbon Ker 43.
Similarly the Goodhew family, long term campaigners of their Sigma 38 Persephone will be sailing their new (to them) Sun Fast 3200, Cora, previously Cifraline IV which designer Daniel Andrieu campaigned to Commodores' Cup victory in 2016.
According to Goodhew's son Tim, their trade-up is to get competitive: “We have been racing against 3200s and JPK 1010s for a few years and we've done well to the weather mark/Fastnet Rock but we would lose places on the way back.”
The aim is to get up to speed this season ready for Tim to compete in the 2019 Rolex Fastnet Race doublehanded with his father Nigel. In the 2015 race, Persephone finished a creditable 19th overall of 309 starters.
Cora arrived in the UK last weekend and only had her racing sails hoisted for the first time this week – well timed for the Easter Challenge. The crew is looking forward to lining up against David Franks' JPK 10.10, Strait Dealer, and Ed Fishwick's larger Sun Fast 3600, Redshift Reloaded.
Having a more challenging time will be Ramona-Ann Gale and Peter Cyriax with Firebrand, the former pride and joy of the late yacht designer Ed Dubois. Previously they campaigned the 1987 vintage Fastnet Race-winning One Tonner Juno. Firebrand is even more of a handful being a 1965-built, S&S 43, Admiral's Cup competitor.
They have spent the last 18 months modernising Firebrand: Gone are the large overlapping genoas. Instead they have increased upwind sail area by raising mast height by a massive 3.3m. This has also earned Firebrand an additional 30% downwind sail area, but, according to Cyriax, she manages to carry the added horsepower well.
Even Harry J. Heijst's venerable S&S41 Winsome has undergone major surgery with a new keel fitted, albeit a replacement. This follows a new carbon fibre rig being installed last winter.
All will be making use of the free coaching laid on for Easter Challenge competitors by the RORC, led by coaching legend Jim Saltonstall. Saltonstall's team includes RORC CEO Eddie Warden Owen and Mason King, a strong posse from North Sails UK and the welcome addition of Australian international coach and Etchells sailor, Andrew Palfrey.
“The philosophy behind the weekend is to give everyone with new boats, crews and equipment the opportunity to start bringing it all together ready for the season's events,” Saltonstall explains. “We will try to cover all 10 aspects of the most challenging sport in the world – information that would normally cost you £1000s!”
Coaching is available to all, large or small, experienced or newbie. Entrants must contact the RORC to request coaching and can even specify areas on which to focus (eg sailing technique, trim or equipment). Saltonstall advises. “Crews can get what they want out of the weekend.”

Laura Dillon says they are keen to learn more about setting up their carbon fibre rig on Winsome. The learning curve will be steeper on Cora, as Tim Goodhew notes: “It will mostly be general for us as we don't know what we don't know…” The challenge will be different again on board Firebrand as the crew gets to grips with the giant rig.

However there is nothing like having a fresh sets of eyes to make appraisals, particularly whilst racing and when they belong to the highly experienced RORC coaching team. With the RRS relaxed to allow outside assistance, sailors can step on to a coach RIB or coaches on to the boat, at any time during a race.
“We like the coaching on the water and the videos and debriefs after sailing with Jim Saltonstall and the North Sails team. It is very helpful,” concludes Dillon. “Plus there's a good number of races and great social activity around the RORC Clubhouse.”