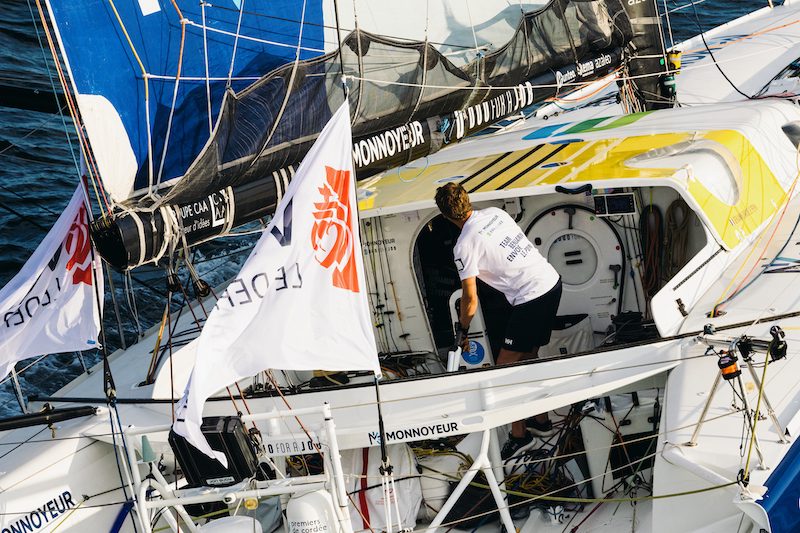 As the leaders of the Vendée Arctique Les Sables d’Olonne race start to escape a wide band of very light airs to the SW of Ireland, it is two of the IMOCA rookie skippers on older style non-foiling IMOCA boats who are holding the lead thanks to their position in the east of the fleet. But 100 miles to the west, having emerged into a new, building SW’ly breeze the faster foilers should accelerate and the rookies’ days on top might be numbered.

It is blond-haired 31 years old French skipper Benjamin Ferré (Monnoyeur – Duo For A Job) who leads 30 years old Guirec Soudée (Freelance.com) by 11 miles this afternoon. Ferré had a prodigious rise to success in the Mini 6.50 class going from rookie to third place on the 2019 Mini Transat in just two years.

He is presently mentored by Jean Le Cam and races the IMOCA which is widely considered the quickest, best optimised non foiler, the Vendée Globe 2012 winner as Francois Gabart’s Macif and Route du Rhum winner as Paul Meilhat’s SMA, a veritable wolf in sheep’s clothing.

Ferré was an adventurer in his past. At 24 he sailed solo across the Atlantic using only a sextant. He raced a vintage Renault 4L across Morocco but his CV pales in the light of his rookie rival Soudée. He is the youngest sailor ever to complete the Northwest Passage (the sea route between the Atlantic and Pacific oceans through the Arctic Ocean) and spent five years sailing round the world – much of it with a red hen Monique. He spent 130 days stuck in ice, surviving only on eggs and rice. Now having turned his attentions to the Vendée Globe, he races the Farr design which Alex Thomson took to third in the 2012 race and which most recently Benjamin Dutreux sailed to ninth in the 2020 Vendée Globe.

Their gains might be short lived. As their routing choices for their daggerboards, non-foiling boats has kept them east there is now more wind in the west. Charlie Dalin – fourth on this second afternoon of racing – has already wound his APIVIA up to 23 knots in just 18-19 knots of wind and was making rapid progress up the course. He was computed to be 22 miles south of Ferré and sailing eight knots quicker.