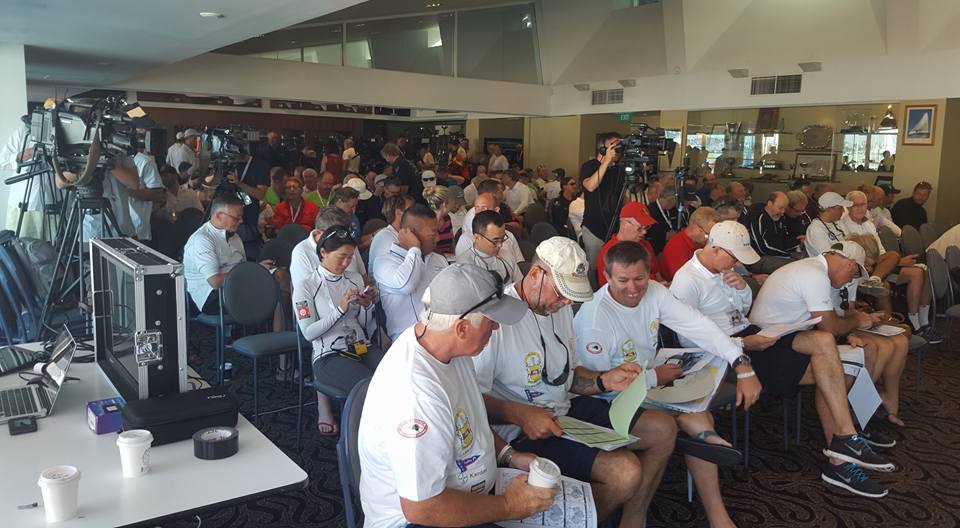 There were smiles on the faces of the super maxi skippers and navigators after the race morning briefing by BOM meteorologist Jane Golding. The cold front that is expected to hit the fleet tonight has weakened and the big boats will have the benefit of fresh to strong northerlies for the first six to nine hours of the race.

With the front expected to have a bit of easterly in it further from the coast, watch for the bulk of the fleet to go well offshore, looking for the Eastern Australian current which is running south at two to three knots.

Iain Murray, who will be on Wild Oats, was heard to tell Anthony Bell, the owner and skipper of Perpetual Loyal, “One of us will do it. Someone has to break the record.”

Bell told Australian Sailing editor, Kimberley Wilmot that he will have to take a bit more risk than he would like to keep in contact with Wild Oats and the other, lighter super maxis.

“We are okay, the boat is in good shape. The crew are all bunkered down ready to go. Anything can happen. You take what you can get.

“Everyone wants something different to suit their boat. The back end of the race is unpredictable coming into Hobart. It usually is.”

David Witt, skipper of Scallywag, is delighted with what he heard this morning. “If I had to write a forecast for us, it would be this one,” he says. “Light air just forward of the beam really suits us.”

Once the front has passed, the northerlies will return. They will arrive earlier than previously expected but they will be weaker off the coast of Tasmania than off the NSW coast, possibly pushing the TP52s or even the 40 footers into contention for handicap honours. However, those still at sea on December 30th are likely to encounter terrible conditions as a deep Low moves over Tasmania. The forecast is for rain in Hobart for much of this week, making conditions on board the smaller boats very uncomfortable.

It is still a complex equation with many factors that could change. And there is always the River Derwent which notoriously shuts down at around 10pm every night, leaving unlucky boats wallowing in the tide with no wind to help them sail those vital last miles to the finish.

History suggest that the narrow-beamed Wild Oats XI is favourite to take line honours. The major interest is whether she can again do the treble – line honours, race record and handicap honours.