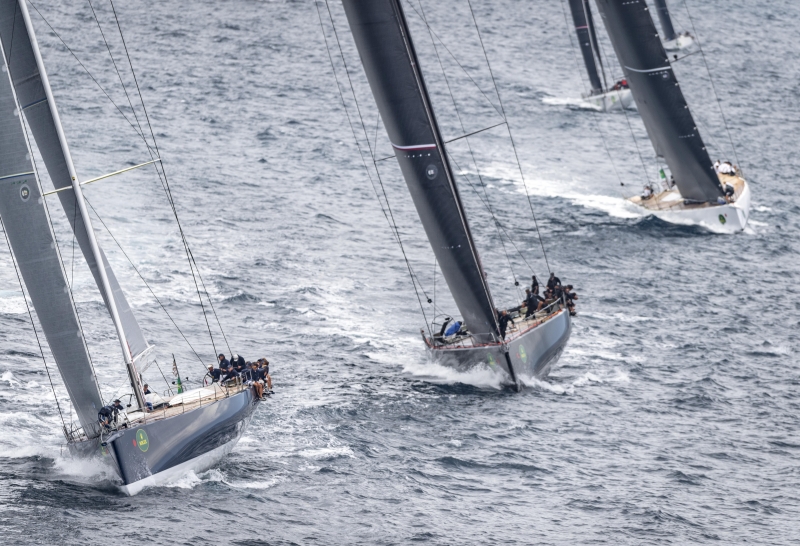 Saint-Tropez, 13 June 2018 – Saint-Tropez bid farewell to the Rolex Giraglia for another year when an international fleet of 212 yachts commenced today’s 66th running of the 241-nm offshore race to Genoa, Italy. Following four start sequences played out to a consistent ten knot breeze and blue skies, the fleet embarked on a race which is set to resemble last year’s edition, one dominated by light conditions and demanding crews’ patience and resolve.

With the smaller yachts starting first, the bay of Saint-Tropez offered a spectacular panorama of the Rolex Giraglia fleet as the Wally Centos and Maxi 72s weaved their way towards the front. At the turning mark at La Fourmigue, some 26-nm into the race, the leading group comprised the 100-ft trio of Magic Carpet Cubed, Leopard 3 and Tango together with defending race winner Freccia Rossa and Gerard Logel’s Arobas. A long leg towards the mystic Giraglia rock, the race’s emblematic landmark off the northern tip of Corsica and virtual halfway point, now awaits.

The quest for line honours appears to be the most competitive in recent memory with nearly a dozen yachts having a realistic chance of finishing first. Less likely, due to the conditions forecast, is the breaking of the race record. The time of 14 hours, 56 minutes set by Esimit Europa 2 in 2012 should stand for at least another year.

“It’s looking likely that it will take 24-25 hours to get to Genoa,” explained Thierry Peponnet, tactician on Tango, one of the yachts expected to be amongst the frontrunners. “Most of the race will be upwind or close reaching. The focus for us is to have a good start, to be ‘in the race’ as soon as possible, and to lead the two other Wally Centos.”

The lighter conditions are expected to favour the Wally Centos, also represented by Galateia and Magic Carpet Cubed, over the Maxi 72s and Leopard 3, a 100-ft Maxi built for the more boisterous elements of offshore racing. “We have no special game plan as light conditions are never very stable. We have to be prepared for anything,” revealed Jochen Schümann of Magic Carpet Cubed. Schümann was slightly more cautious than Peponnet believing a 28-29 hour window to arrive in Genoa would be more realistic.

Alex Schärer, owner of Caol Ila R, has recent experience of a slow, rigorous edition of the offshore race. Last year his Maxi 72 arrived as runner-up in Genoa after 33 hours of racing and mere minutes behind her class rival Momo. Schärer believes the increased competition will make it hard for his crew to better finishing second on the water. “Line honours will be more complicated to achieve this year for one of the 72s because of the presence of the Wally Centos and Leopard 3. When boats are so similar in rating and performance, tactics and teamwork become very important and different approaches to the Giraglia rock and to Genoa have to be considered.” Cannonball, Jethou, Lucky, Momo and Sorcha complete the Maxi 72 representation.

Although fully focused on the intense challenge ahead, crews will take a moment to enjoy the splendour of the Giraglia rock. The frontrunners are expected to round at sunrise on Thursday morning. Luca Bassani, founder of Wally, has sailed the race 35 times, and identifies reaching the Giraglia as a significant moment, both tactically and emotionally. “The rock early in the morning takes on a colour which is really stunning. Rounding important rocks, like the Fastnet and the Giraglia, is always a big emotion. However, the wind is always a challenge. The transition there between the westerly and easterly winds can be very difficult.”

The contest for line honours is only one facet of the race. The main prize is the Rolex Challenge Trophy and Rolex timepiece awarded to the overall race winner on IRC handicap. Over the past ten years this has been won by a number of smaller yachts sailed by Corinthian crews who embody the race’s famous spirit of camaraderie, determination and passion. While the predominantly professionally-crewed larger yachts expect to arrive in Genoa after one night at sea, the bulk of the fleet – over one hundred yachts measure less than 40-ft – will have to manage fewer resources over a longer period at sea.

The Rolex Giraglia is organised by the Yacht Club Italiano (YCI) in collaboration with the Société Nautique de Saint-Tropez.

Live tracking from the 2018 Rolex Giraglia can be found here.