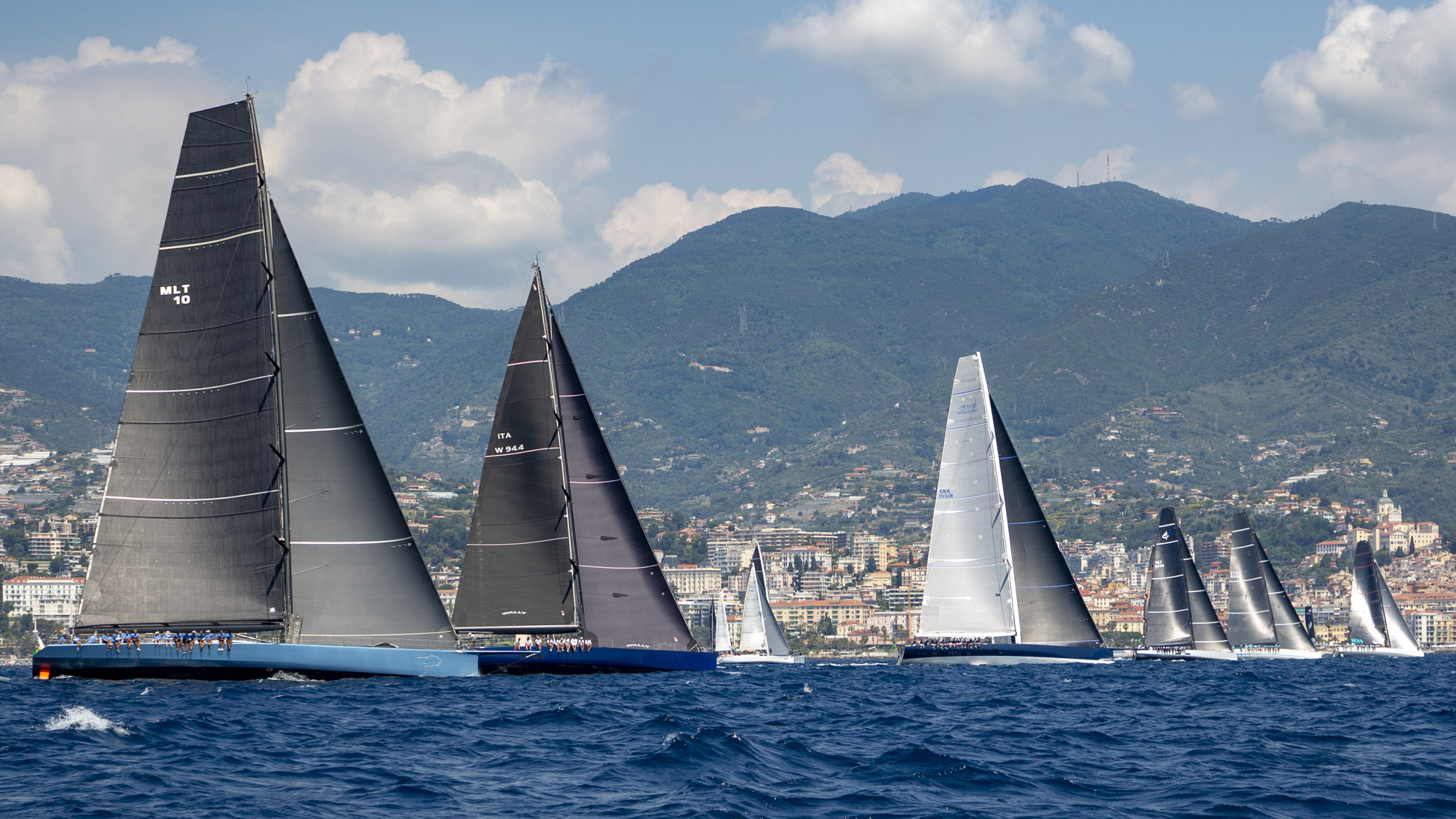 The longest yachts in IRC 0 were the first to get away from the Sanremo start today in the Yacht Club Italiano’s Rolex Giraglia.

This fourth event of the International Maxi Association’s Mediterranean Maxi Offshore Challenge set sail on time at midday, but on a new course. Due to the pandemic, this year’s race starts and finishes in Italy, rather than running between France and Italy, following the event’s historic raison d’etre – to improve détente between the two nations post-World War Two.

From the start the maxis were sent off on a short beat east in 12 knots of breeze before turning west onto the course proper. At the weather mark it remained ultra-close between the lead trio of 100 footers.

Joost Schuijff’s Farr 100 Leopard was a nose ahead of Sir Lindsay Owen-Jones’ Magic Carpet Cubed, but the crew of the dark blue Wallycento was slicker hoisting their kite and was able to pass.

Meanwhile the Trieste-based grand prix maxi Arca SGR, campaigned by Furio Benussi and his Fast and Furio Sailing Team, had initially lost out digging too far into the coast. However, as they powered off downwind towards the first of two turning marks off the Italian and French rivieras, their lighter, more powerful 100ft maxi pulled ahead.

Prior to leaving Sanremo this morning Arca SGR’s skipper Furio Benussi said the routing to the finish in Genoa had them arriving in 26 hours.

Benussi, of the famous Trieste sailing family, is an old hand in the Rolex Giraglia, having won it twice in the early 2000s.

Regarding this year’s race and its start from Sanremo and a longer westward opening leg, Benussi was concerned about the two marks that competitors had to round en route; a gate close in to the shore off Ventimiglia and a turning mark to the west of Cannes.

“They will be a bit tricky, close to the high hills,” Benussi warned. Otherwise, he was looking forward to the first run, this point of sail being the preferred for his yacht – formerly Grant Wharington’s Skandia Wild Thing, 2003 Rolex Sydney Hobart line honours winner.

Benussi was expecting the leg east-southeast towards the Giraglia Rock to be fully upwind, however, the weather models were making conflicting predictions regarding the location, scale and severity of a wind hole tonight on the way to the Rock.

The Italian felt it was likely they might have to err towards the Corsican coast to avoid this.

“We might have to do a little bit of a circuit,” he admitted. “Then it is a reach to Genoa until about 6-7 miles out when the wind drops. I hope to have 3-4 knots which is okay for us. Zero would be a disaster.”

In the intense race between the hot 60 footers, it was the Reichel/Pugh designed Wild Joe that led away from Sanremo. Owner, Márton Józsa, was on this occasion racing with an entirely Hungarian crew.

Over the pandemic period, Wild Joe has competed in the Rolex Middle Sea Race and Józsa says they put in some good training earlier this year in Croatia. This helped them further test the new canard they fitted last year.

“We are very excited to be here after what was quite a long rest unfortunately,” said Józsa. However, thanks to the canard he was looking forward to experiencing their newly improved upwind performance in what will be their fourth time competing in Rolex Giraglia.

“Sanremo is also a beautiful place,” Józsa said, comparing this course to the regular one starting from Saint-Tropez: “It will be a bit more downwind, then it will be upwind to Giraglia, and it will be tricky because the wind is bending.

“We are hoping to get some fresh wind at Giraglia.” Józsa was anticipating a time of 30 hours into Genoa, i.e., remarkably close to the 100 footers. However, he anticipated the smaller boats were going to come out on top in the overall results this year, the best conditions forecast to be on Friday by which time the maxis would already be finished.

To date he has been a regular competitor racing inshore on the International Maxi Association’s circuit, but this is not just the smart black mini maxi’s first Rolex Giraglia, it is the first offshore race ever for boat and owner.

“I am excited to do it,” said Sala, adding that he was looking forward to light winds in the race as they haven’t changed the boat from its inshore configuration.

The first arrivals in the Rolex Giraglia are expected tomorrow afternoon. The race can be followed on the SGS tracker at: http://www.sgstracking.com/live/index.html?id=255