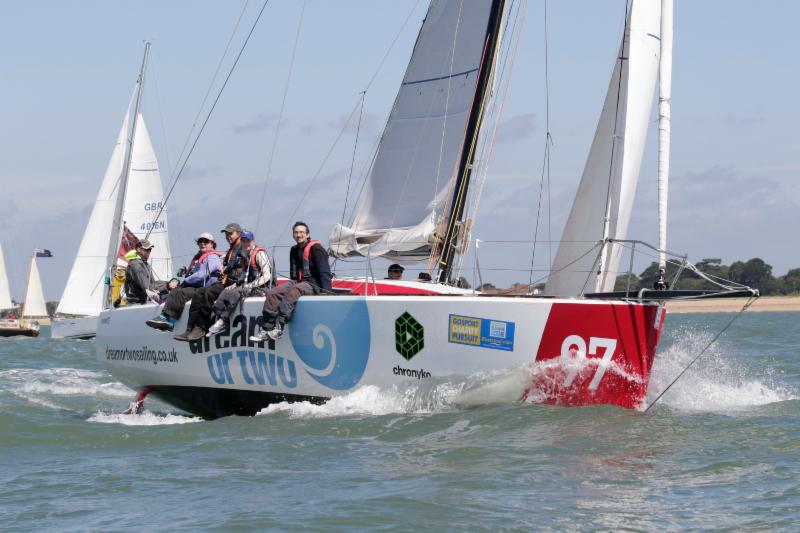 While everyone who enters the Rolex Fastnet Race dreams of winning or doing well, the event's stature as the world's largest offshore yacht race, means this is often not the only reason for taking part.

Around 400 boats will be on the Cowes start line on Sunday 6th August – the largest ever entry in the 92 year history of the Royal Ocean Racing Club's biennial 'classic 600 miler'.

Among them will be the Swan 57 Equinoccio of Martin Westcott, the first Chilean to sail around the world via Cape Horn. Equinoccio's participation marks the 10 year anniversary of the last Chilean entry in the Rolex Fastnet Race – the Class40 Desafío Cabo de Hornos. Skipper of that yacht, Felipe Cubillos, became a legend in Chile when he and José Munoz led around Cape Horn in the 2008-9 Portimão Global Ocean Race. Sadly Cubillos subsequently was killed in an airplane accident while attempting to help the people of Juan Fernandez Island following the tsunami of 2010. Racing on board Equinoccio will be Cubillos' son, now 24.

Russian Alexander Vodovatov has chartered Quokka 8, the Grand Soleil 43 of former RORC Commodore Peter Rutter. In addition to competing in his second Rolex Fastnet Race, Vodovatov has strong secondary ambitions: “I am doing the race to popularise and develop offshore yachting in Russia. Last year I organised a Russian team to compete in the Rolex China Sea Race.”

Ting Lee's Shanghai-based team, Noahs Sailing Club, competed in the last two Rolex Sydney Hobarts on board their TP52 Ark 323. Their aim is similar to Vodovatov's, only in China, explains the team's Li Yun: “To participate in the Rolex Fastnet Race is on every sailor's bucket list. Chinese people have never been to this race, because our big boat sailing history is less than 20 years old. Noahs Sailing Club was set up in 2013 as a professional sailing team to promote big boat sailing in China.” For the race they have chartered EH01, Andy Middleton's First 47.7.

Several youth teams are competing. Run by James Oxenham and co-skippered by Owen Kinsella and Harry Bradley, Code Zero Racing is a Cowes-based campaign, focussing on both inshore and offshore racing. Crew range in age from 17-22, making it the youngest crew in this year's Rolex Fastnet Race.

Code Zero Racing will be racing Geoff West's Reflex 38, Lightning Reflex, on which they are also entered in several other RORC offshores as qualifiers. With James Tomlinson (son of Rick) among the crew, expect some top images to be beamed back from on board.

Another youth team heralds from the Greig City Academy in Hornsey, east London, with the remit of getting inner city school kids afloat. Brainchild of Head of Sixth Form, Jon Holt, Greig City Academy's sailing takes place on the Frers 45 Scaramouche, once part of the 1983 US Admiral's Cup team. The campaign has attracted the attention of HRH The Duke of Edinburgh and notables such as Lawrie Smith, who has assisted with coaching.

Among the pupils on board for the Fastnet is Karim Ming, 17: “I have not found the actual sailing part too difficult. I enjoy being on the boat for a prolonged period of time and adapting to situations that spring up. I enjoy it when it's not cold and night sailing is one of my favourite bits. I miss my sleep though, and I struggle with the watch system, so I would rather sail through the night and then get some sleep afterwards.” Of the sport he adds: “Sailing concretes my belief in my ability that I can achieve something and that I am resilient.”

For others this year's race marks a significant birthday or anniversary. For Derek Saunders, back once again on his Farr 60, Venomous, it will be both. “It's my 13th race, 30 years since my first as skipper in 1987, but it also falls on a landmark birthday!”

Meanwhile Dream or Two Sailing, owners of Fortissima, are using their Class40 to raise money for the Andrew Simpson Sailing Foundation. Through a sister company, Chronyko, which runs immersive training and skills development events, they have also offered a scholarship to 18 year old Cat Hunt, a dinghy instructor from Lake Windermere, with aspirations to become a professional offshore sailor. She will be racing on board during the Rolex Fastnet Race.

“The race is great to get people excited,” says Martyn Ruks, Director of Dream or Two Sailing of why the Rolex Fastnet Race is a good event for fund raising. “It is on the list of what people want to do and it helps to bring in a non-sailing audience.”

But for many, participating in the Rolex Fastnet Race is simply a chance to be part of this historical yacht race. Take Rickard Bergkvist who is bringing his IMX 40 Foxy Lady all the way from Sweden to compete. “This is my Everest! While I anticipate challenging conditions, I look forward to rounding the Fastnet Rock,” he says.

The Rolex Fastnet Race will set off from the Solent on Sunday 6 August bound for Plymouth via the Fastnet Rock.