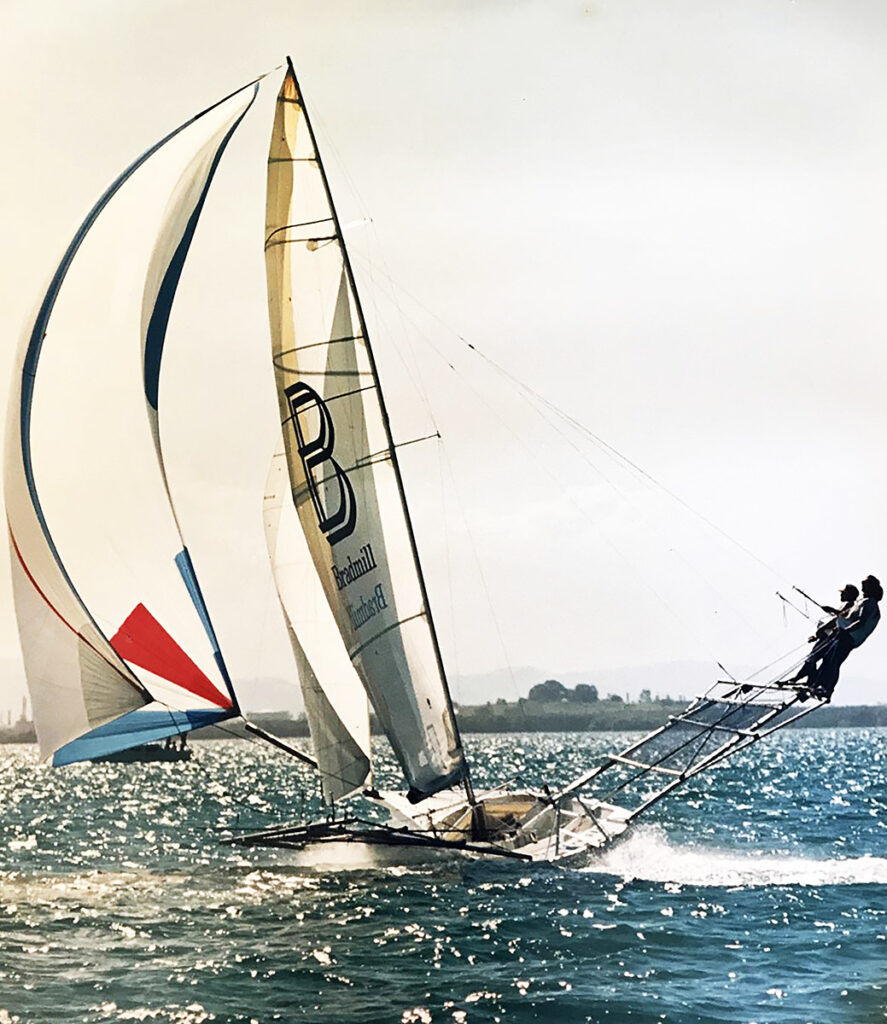 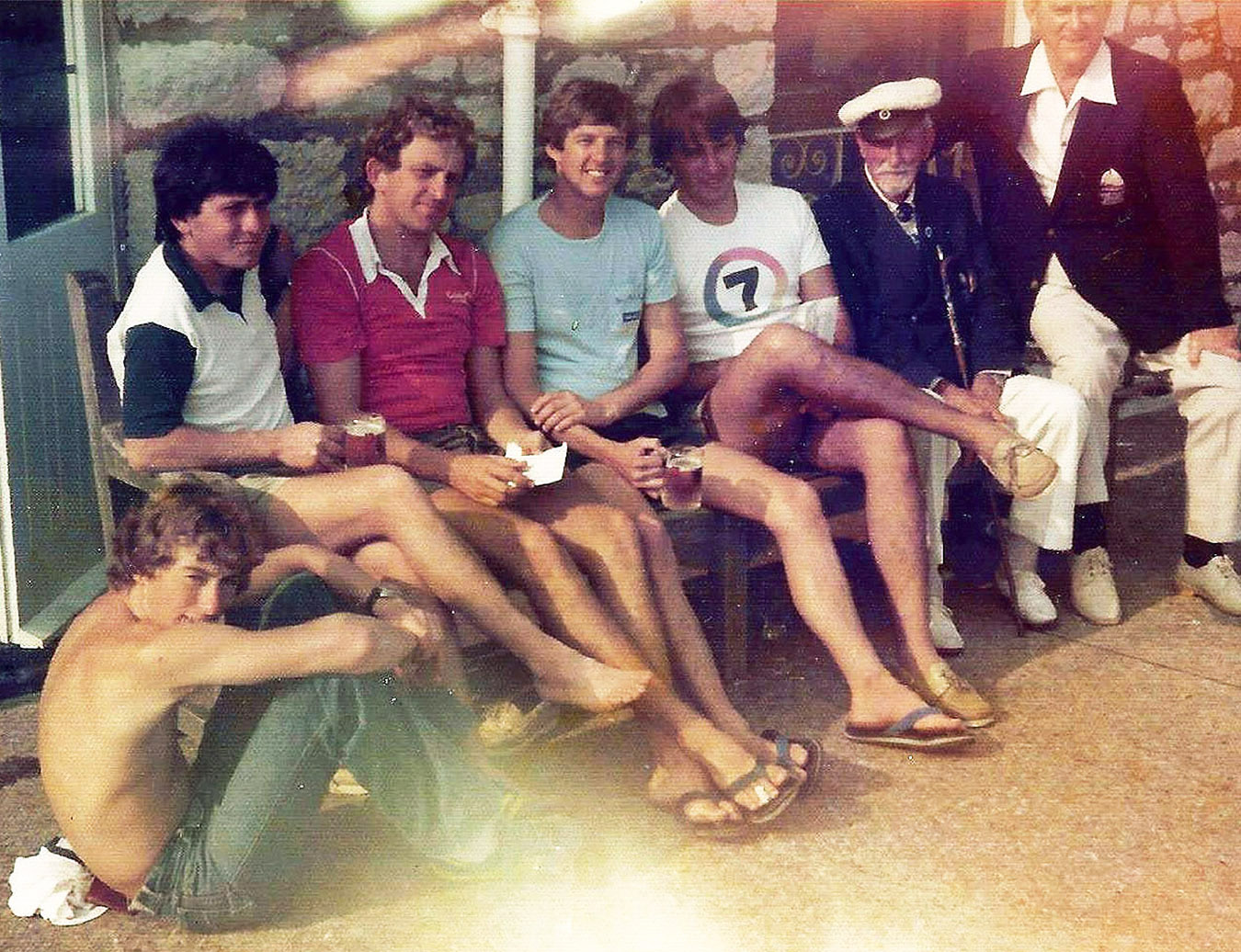 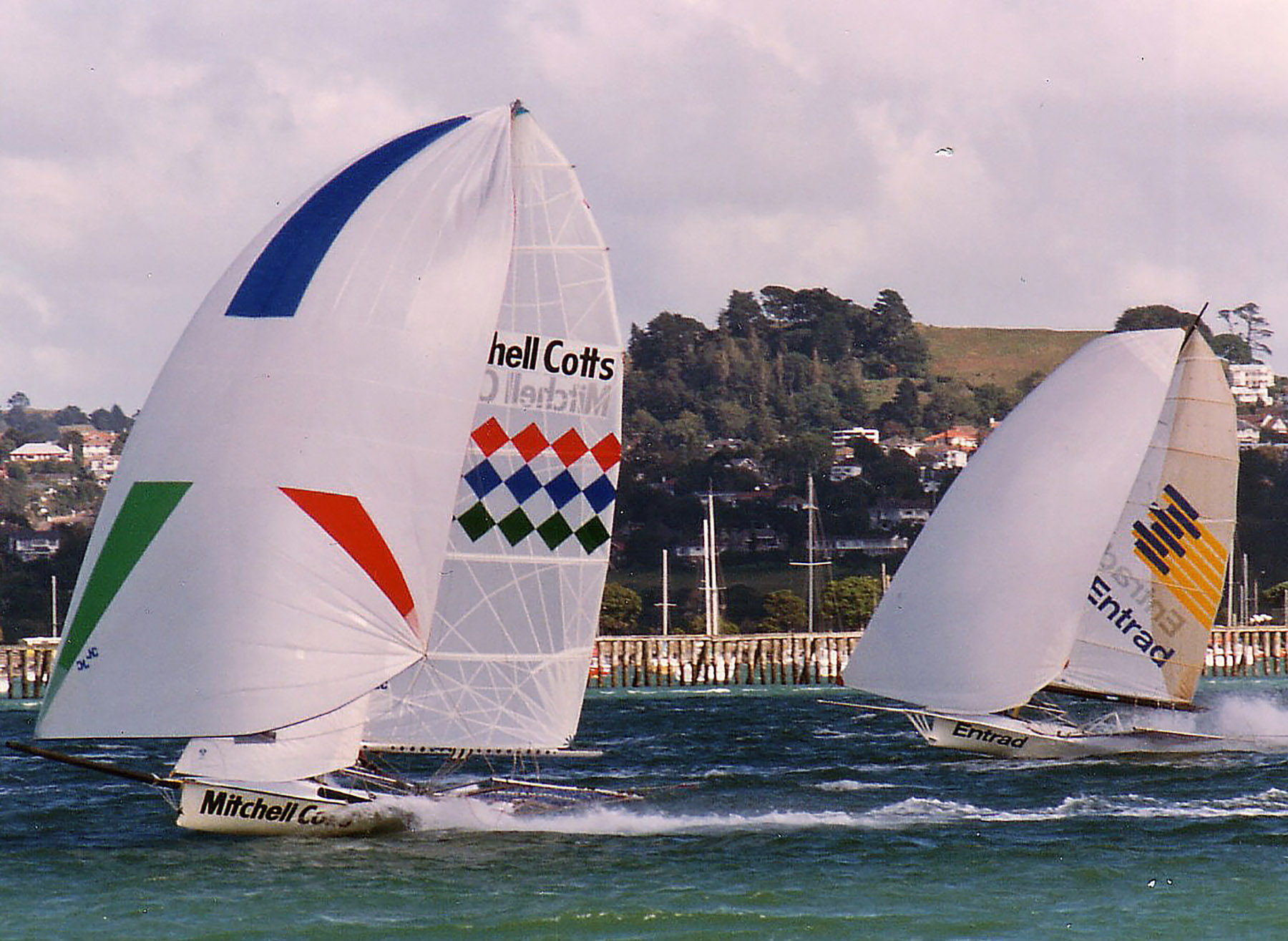 Entrad and Mitchell Cotts at the 1986 worlds in Auckland. Pic - 18ft skiffs 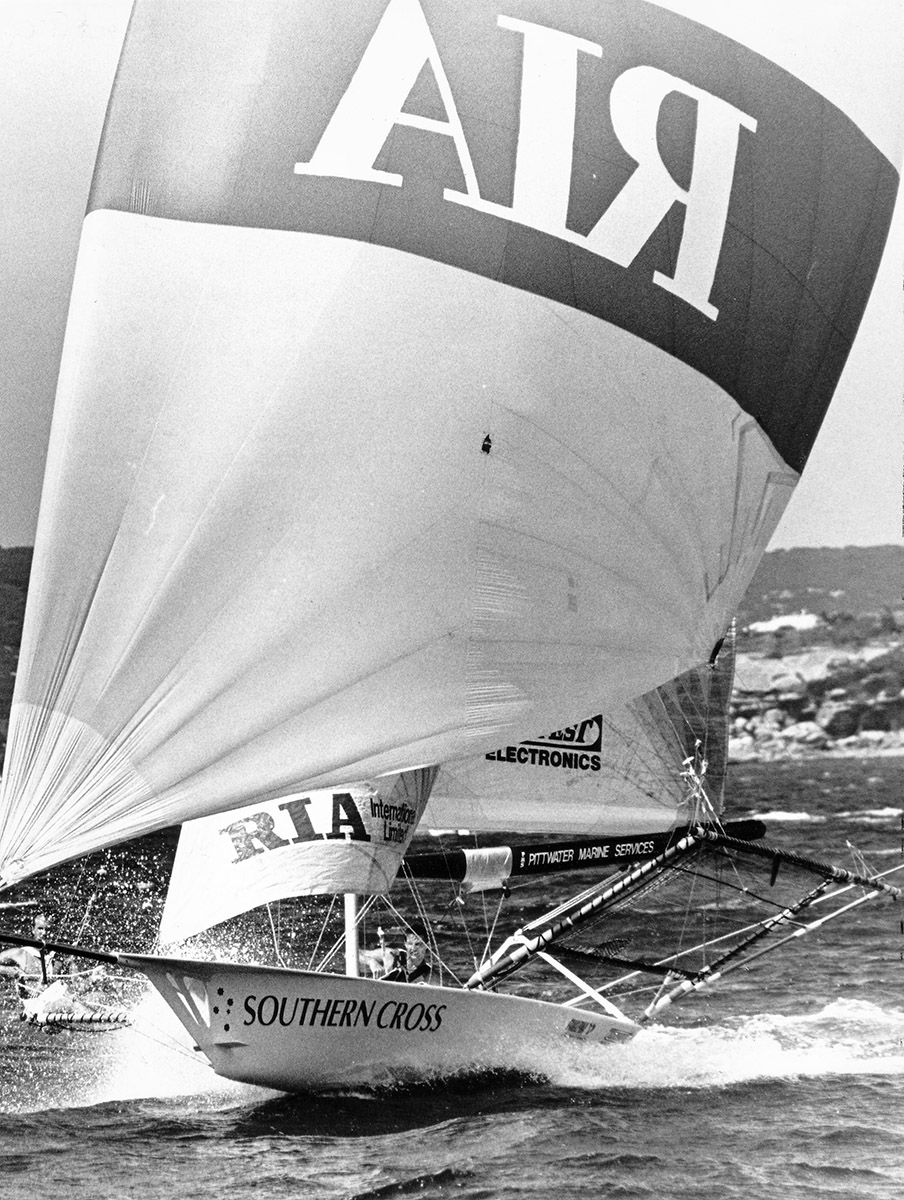 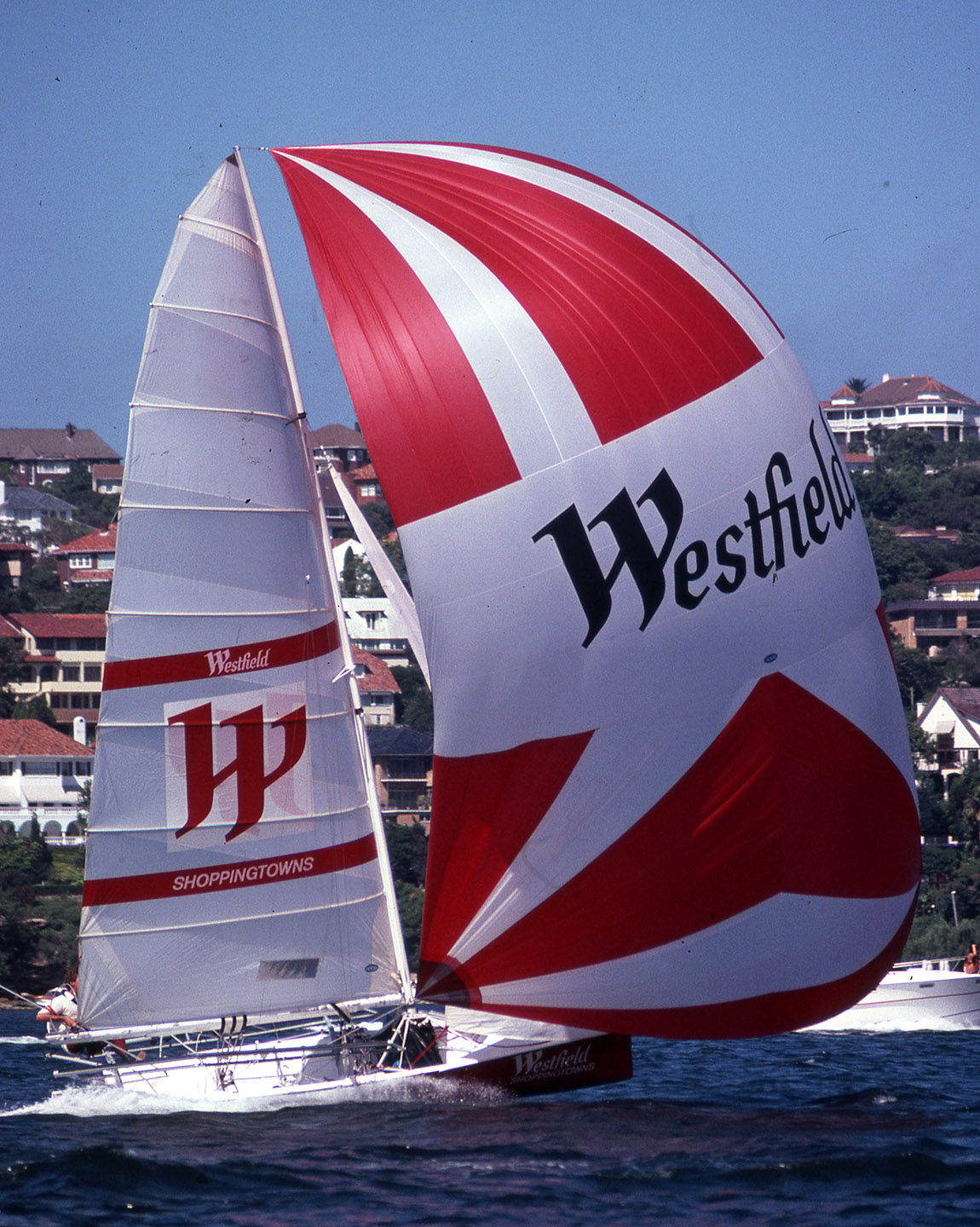 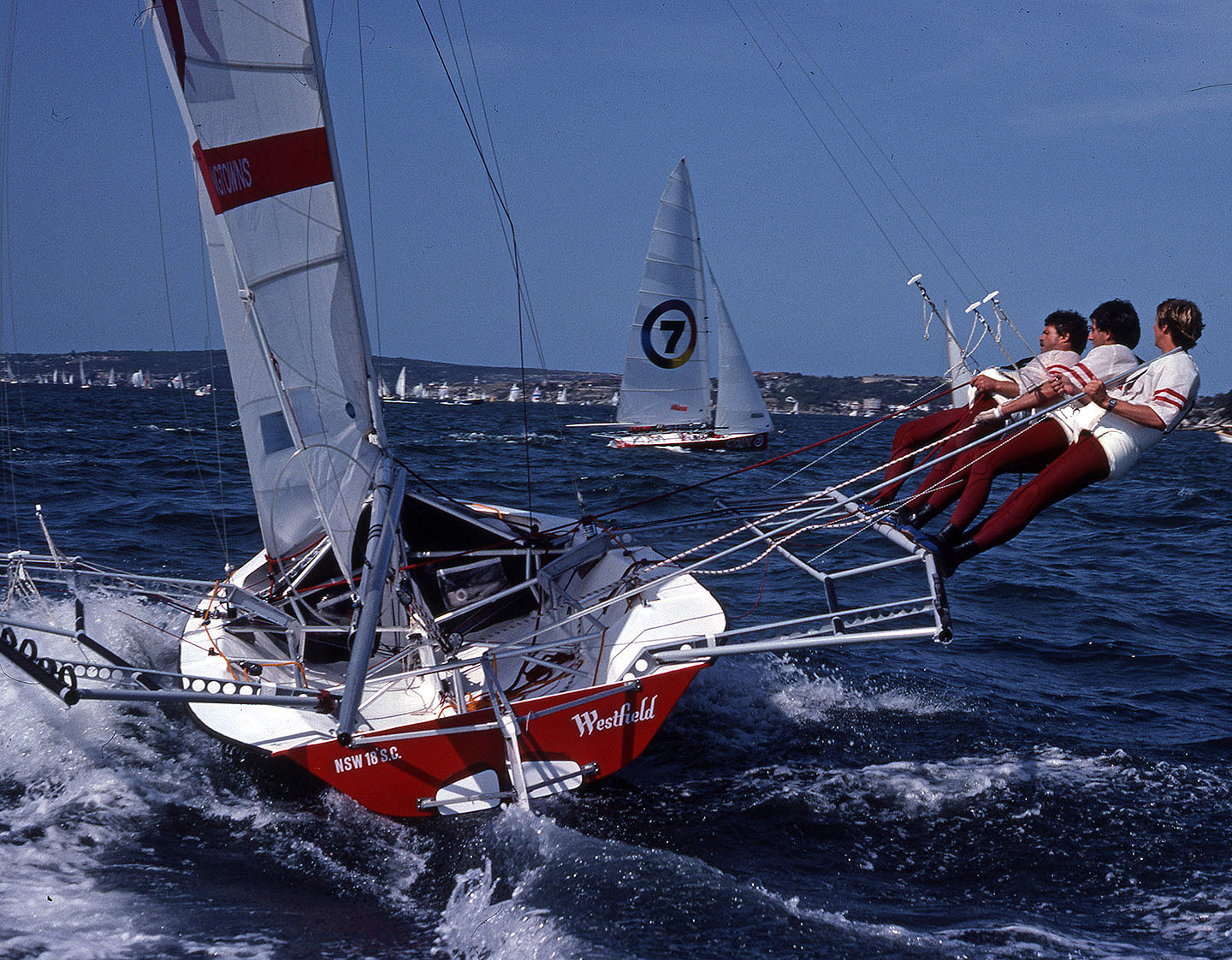 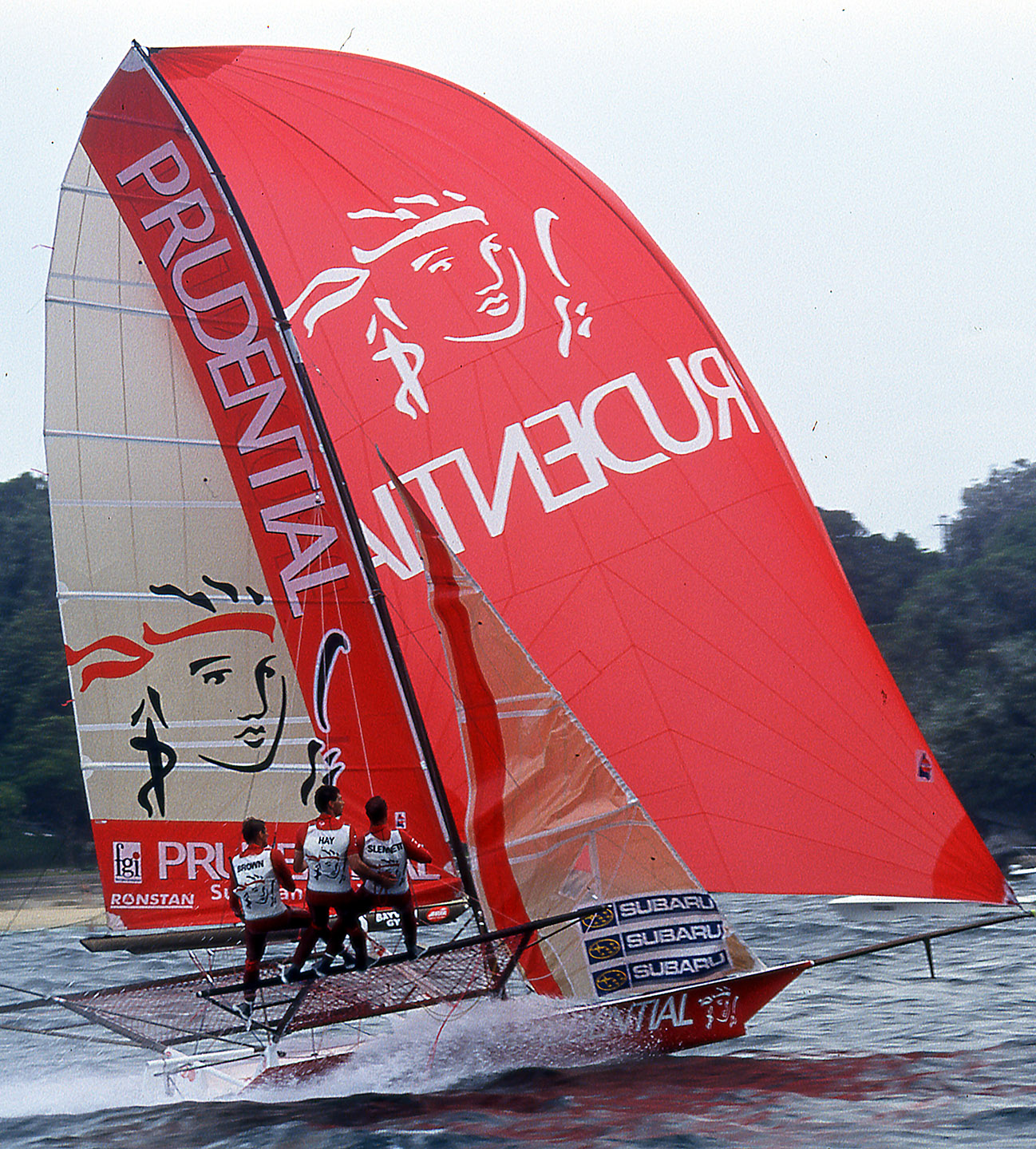 Three-times JJ Giltinan 18ft skiff champion Rob Brown OAM has a wonderful record of success in a sailing career which has spanned three continents and resulted in three victories in three of the world’s most prestigious sailing events.

Like many of the top 18ft skiff champions over the years, Rob began sailing at age six, in Sabot dinghies, at Snails Bay Sailing Club, and sailed as fourth hand in 16s at Drummoyne before moving into the 12ft skiffs at Balmain as a 15-year-old.  In his third season in the 12s, he won the Junior State and National Championships.

His talent must have been obvious to 18 footer administrators at the time as he was contacted by the NSW 18 Footers League to sail an 18ft skiff, with a supplied sponsor, Polyunsaturated Flora.  He recalls, “I purchased a boat which was formerly David Porter’s KB in 1972.  Dave was my idol growing up, so to be able to sail one of his boats was an honour! I had photos and posters on the wall of Dave’s Aussie, Porter Marine and KB. I also had some photos of my dad Norm, sailing his 18s and 12ft Skiffs.”

“It was a good learning season.  We just missed out on making the NSW team for the Worlds and my mainsheet hand, Greg Bury was also a mentor.  He taught me how to sail 18s, and instilled in me the importance of thorough preparation and the responsibilities that go with wearing a company logo on your boat, and on your shirt.”

The ‘lesson’ must have been well learned by Rob and the team, as the sponsor, Unilever, supported them again the following year.  The new Polyunsaturated Flora was a Frank Bethwaite design, which was the same design as Dave Porter’s new boat.  Both introduced the first Hydraulic Rams under the mast for rig tension control, and Brown’s team finished third to Iain Murray and Dave Porter in the 1978 Worlds.

Deciding it was time to add his own design and engineering flare, Brown came up with a design for the 1978-79 season boat, which raced as Steelstocks. They used Klegecell foam and Kevlar for the hull, which was supported by titanium tube framework. The team once again finished third, behind Murray and Porter, at the 1979 Worlds.

In 1979, Rob also sailed the Admirals Cup on Impetuous, with Hugh Treharne and Sir James Hardy, and survived the tragic Fastnet Gale. “We raced the whole time, surviving the unbelievable conditions to finish third on handicap, and with other team members Police Car and Ragamuffin, took the trophy home for Australia. I also did my first Hobart Race that year on Impetuous.”

When Richard Court introduced the wing concept early in 1980, Brown built hinged alloy flip- flop wings which he used on Steelstocks at the 1980 Worlds in Auckland. “We began the 1980 Worlds with two convincing wins, but our lead in the regatta was short lived when I developed food poisoning and had to spend a night in hospital.”

Brown was a member of the 1980 America’s Cup campaign and was involved again in the Australia II campaign, so much of his time was spent in preparation for the Cup and he had limited time to devote fully to the 18s. Naturally, this was offset by being involved with such a fantastic winning achievement.

According to Rob, the 1980-81 season on the Iain Murray-designed Westfield Shoppingtowns skiff was disappointing. “Our results were mixed and we were off the pace, and recorded substandard results.”

After that disappointment, “I was inspired to do my own thing again. With sponsorship from Bradmill, McConaghy built the hull with carbon fibre / foam sandwich. The next step was to go with carbon tube framework to stiffen the hull and carbon tube wings to save weight. They were light, but fragile, and there were no worthy results to mention that year.”

Brown recalls, “After spending so much time with the Americas Cup, and what we achieved over there with our attention to detail, innovation and persistent focus for improvement in all areas of our campaign, I decided to do my own design again for the 1984-85 season.”

“I got really close to Peter Van Oossananen, who tank tested Australia II in Holland and did all the design development work on the keel for Benny Lexcen. Peter also ran our telemetry system monitoring our performance each day we sailed.”

“Colin Beashel built the strip plank balsa and carbon fibre Bradmill that year at his Elvina Bay boatyard, which was carried out under complete security, due to our extensive design research and concepts that we wanted to keep secret.”

“The hollow feature was a breakthrough in 18ft skiff design. It involved having a hollow section in the last one-third of the hull, which generated an upward force on the hull.  The performance gain was quite staggering.  The boat speed increased out of a tack, a force of 45-50kgs was generated, lifting the transom vertically up, which meant that the boat got onto the plane a lot earlier, so a lot faster out of tacks, and also meant that I could reduce the wetted surface area of the overall water plane due to the hollow.”

“It meant a faster skiff all round. We took out the States, the Australians and we won our first World Championship. The team was Matt Coleman, mainsheet, Ian Souter, who sailed the Worlds with a torn medial ligament, in the bow, and Phil Wulff, who was coach and in charge of maintenance.”

For the team’s defence of its titles, Bradmill changed its sponsoring name to Entrad on the new skiff, for front-line marketing and branding reasons.  Brown did further design changes when he increased the hollow form and decreased the wetted surface area of the hull.  He declared it “By far, the fastest skiff ever.”

Julian Bethwaite (bow) joined Rob Brown and Matt Coleman in the new skiff, which Brown claimed, “Was by far the hardest skiff we ever sailed.  The hollow generated so much lift that it would nose dive the boat with little notice.  We had to place aerofoils on the bow to stop it nose diving and to overcome its bad habits when it was windy and the sea state got up.

“We decided that to win this year in extreme conditions, we had to train harder and more often to overcome this beast, so we trained between Sydney Heads in very bumpy and unpredictable water and waited for breezes over 25 knots to really test us out.”

The attention to detail, and Julian Bethwaite’s idea of using carbon fibre in the mast tips on the alloy masts, prepared the team for the 1986 Worlds in Auckland, but when the skiff ran aground in Heat 2 and ripped the centre case out of hull, it could have all been over.

According to Rob, “Everyone thought we were done, but they were incorrect.  We worked all night on the skiff and repaired all the damage and had her ready to go racing at 11am the next day.  We went on to win the Worlds.”

A number of situations arose during the 1980s, including the rising cost of competition, which led to a decline of available sponsorship and similarly a decline in fleet numbers.  This led to administrators making a number of rule changes in an attempt to stop the problem.

Unfortunately, the changes were complicated as they related to the number and replacement of sails based on their usage in previous races, and included a percentage area to determine whether each sail was declared ‘new’ or a ‘replacement’.

It wasn’t surprising that the resulting confusion led to a very unique situation at the 1988 JJ Giltinan Championship when Rob Brown’s Southern Cross and Trevor Barnabas’ Chesty Bond were declared joint champions after a number of protests and appeals.

Both skippers were dis-satisfied with the decision, and each took a break from the 18s the following year.

Rob took a different direction when he later resumed his career in the 18s, and recalls, “I was approached by Grand Prix Sailing to come on-board and assist with running the events, and working as expert commentator for the TV series.”

In 1990, he was asked to take over the Prudential skiff and also became its manager.  “I went on to win seven Grand Prix titles at GPS before retiring from racing in 1996.”

After an incredible sailing career, which included victories as part of the crews of Australia II in the 1983 America’s Cup and Impetuous in Australia’s winning 1979 Admirals Cup team, 10 Sydney-Hobart Yacht Races, and numerous other championships in a variety of classes, it was interesting to ask Rob, how did it feel to win the world championships in the 18?

Despite all the wonderful achievements, Rob admits, “The most precious and rewarding were the three 18ft Skiff JJ Giltinan world championship wins.”

Spectators can follow the racing on board the spectator ferry.  Booking online through the club’s website is essential. To book, see: http://www.18footers.com.au/18-footers-sailing/spectator-ferry/