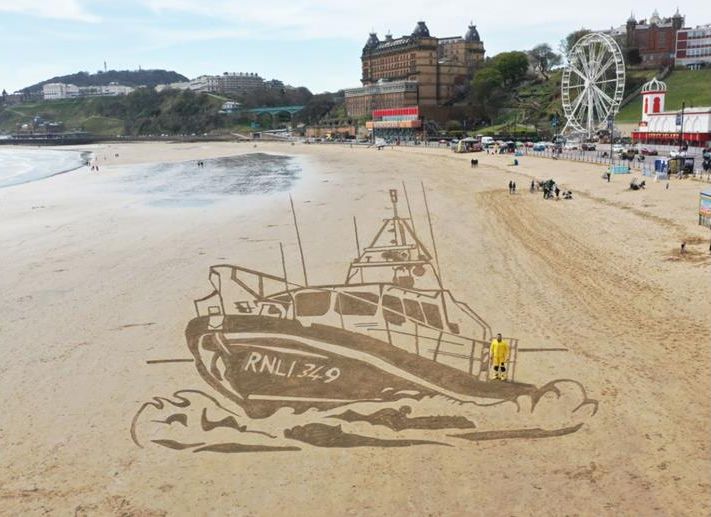 A 100m Shannon lifeboat was etched into the sand at Scarborough beach in aid of the RNLI's Mayday campaign. Photo RNLI/Sky Filming.

The Royal National Lifeboat Institution (RNLI) has today released its rescue figures for 2020, showing that a total of 349 lives were saved by the charity’s lifeboat crews and lifeguards throughout the year. That’s almost one life saved every single day.

The data has also revealed that last summer alone (1 June – 31 August), RNLI lifeboat crews saved 140 lives – an increase of 32% from the year previous – after coronavirus travel restrictions led to people flocking to the coast around the UK and Ireland.

The charity also reported 42 lifeboat launches per day over the summer period, which is almost double the number launched throughout the rest of the year.

With lockdown restrictions easing once again, and huge numbers of people planning to ‘staycation’ at the British coast, the RNLI are anticipating that summer 2021 will be their busiest yet – but more funds are needed to ensure that their lifesaving service is able to keep everyone safe.

In preparation for the busy summer period, the RNLI are putting out their own urgent Mayday call, by asking supporters to take part in The Mayday Mile. Whether you choose to swim it, run it, cycle it, dance it or simply walk it, The Mayday Mile challenges you to cover one mile in any way you like between Saturday 1 May – Monday 31 May, whilst raising vital funds to ensure RNLI Lifesavers can continue to keep people safe at the coast.

To raise awareness of The Mayday Mile and encourage people across the UK and Ireland to lend their support, a group of RNLI Lifesavers have helped to create a giant sand drawing on Scarborough Beach, inspired by a Shannon Class lifeboat – the newest class of RNLI lifeboat used by the charity to save lives at sea.

Standing at the back of the striking 100m anamorphic lifeboat – which was created by the RNLI alongside expert sand artists, Sand in Your Eye – is a RNLI crew member, to give the illusion that the craft is answering a Mayday call out at sea.

The lifeboat’s bow features the number 349, to highlight the number of lives that were saved by the charity’s brave lifeguards and lifeboat crews last year.

‘It’s amazing to see the number of people we rescued last year across the UK & Ireland represented by this installation – it makes me very proud to be a volunteer crew member. For almost 200 years, we have answered Mayday calls across the UK and Ireland, and my fellow crew members have often risked their lives to help rescue others.

‘Heading down to the coast or out on the water during the summer is a great way to have fun and stay active. But, if you are not careful, it’s a lot easier to get into trouble in the water than you might think. I hope seeing the lifeboat, and knowing the number on the bow represents someone like them, inspires people to answer our Mayday call – after all no one knows when they might need our help.

‘Through The Mayday Mile, we’re hoping to raise enough funds to keep crews and lifeguards kitted and trained to deal with emergencies – and to come home safe themselves. So please answer our Mayday call and help us to get one step closer to the happy, fun, and safe summer which we all deserve this year!’

All monies raised through The Mayday Mile will give RNLI lifesavers the training, equipment, and kit that they need to rescue others and come home safe themselves, as well as allowing the charity to continue delivering water safety activity for those visiting the coast.

The Mayday Mile challenge will be running as part of the RNLI’s wider Mayday fundraising campaign from Saturday 1 May to Monday 31 May. To sign up and log your miles – or to simply make a donation to support the Mayday campaign, visit RNLI.org/SupportMayday.